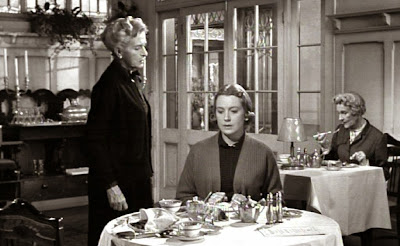 I said recently that I’ve been getting a lot of films that are converted from stage dramas lately, and yesterday I got a film written by a stage author that could have easily been a stage play. That trend is continuing tonight with Separate Tables, a film nominated for Best Adapted Screenplay, a play of the same name by Terrence Rattigan. This is an interesting film if only for its content; it’s surprisingly sexually charged for 1958, and most of this sexual charge is not of a positive nature.

The story is more or less a story of relationships and how those relationships interconnect at a hotel in Bournemouth. One of the features of this hotel is dining at separate tables, meaning that each of the guests dines alone or with a companion with whom he or she shares a room. At meal time at least, everyone is in his or her own little world. The entire story takes place in the hotel, which is really the main evidence that this comes from a stage play. The most we ever change scenes is room to room, or now and then to an outside porch.

What we have, more or less, is a single night and morning in the hotel. Mrs. Railton-Bell (Gladys Cooper) is not our central character in terms of narrative, but she is one of the main sources of dramatic action. An older woman, she holds a dominating and stifling grip on her spinster daughter Sibyl (Deborah Kerr), who is painfully meek and shy. Sibyl finds herself attracted to the older Major Angus Pollock (David Niven). Pollock is similarly attracted to Sibyl, but the two do little more than talk to each other, much to Mrs. Railton-Bell’s eternal dismay. Pollock is something of a boor, continually telling the same stories from his war days fighting in the North African desert.

The second major triangle starts with John Malcolm (Burt Lancaster), a frequently-drunk American living at the hotel. The older women, particularly Mrs. Railton-Bell, disapprove of Malcolm’s drinking and of Malcolm in general, and wonder constantly why the hotel keeper allows such a lout to stay on. The reason is that Malcolm is secretly engaged to our hotel keeper, Pat Cooper (Wendy Hiller). This announcement has not been made public yet. A wrench is thrown into these works with the sudden arrival of Ann Shankland (Rita Hayworth), who proves not only to be John Malcolm’s former wife, but also the woman who had him arrested on assault charges and then divorced him while he was in prison for the same.

That particular ugly love triangle is roughly half of the action of the play. The other major event shows up in the newspaper that evening. Major Pollock, it seems, has plead guilty in the nearby town to sexually harassing a number of women in the local theater, and Pollock is unable to collect all of the copies of the newspaper to prevent the other guests from learning about it. Naturally, this causes a scandal and no one is more scandalized than Mrs. Railton-Bell, who is appalled that this terrible old lecher has been even speaking with her daughter at all. Worse for the Major, the paper explains his military career, showing that all of the stories he has been telling are whole-cloth fabrications. Mrs. Railton-Bell, once this terrible news has been revealed, takes it upon herself to poll the other hotel guests in an effort to force Pat to expel the man from his room and return the place to something like decency.

Once these two triangles are set in motion, the rest of the film is more or less working them towards something like a resolution. As it happens, only one of the stories really reaches a conclusion of any sort, and that conclusion is only a temporary one at best. We’re left hanging with the other story with no actual resolution decided. Since this is very much a film that offers a slice of these people’s lives, I’m fine with that.

The cast, of course, is excellent top to bottom. I haven’t yet mentioned my favorite character, Mrs. Meacham (May Hallatt), a crusty old woman who loves to bet on horses and doesn’t care a fig for anyone else’s opinion about anything. But really, with a cast this good, it’s more or less a case of winding up the plot and letting them do what they do. Of all the people involved, it is David Niven who is the most memorable and the most affecting. Major Pollock is a troubled man, and Niven plays him as both utterly British and utterly broken. He is simultaneously the perfect example of the stiff upper lip and of living a life of quiet desperation. It’s heartbreaking in its honesty. Rita Hayworth is similarly great, playing perhaps the purest femme fatale in a non-noir I have ever seen. She’d have been perfectly at home as a character 10 years earlier, goading John Malcolm into abusing her. Deborah Kerr goes hard against type here, playing a mousey woman almost too scared to speak to anyone but her mother. She’s almost unrecognizable in the role, and I mean that in a good way. It’s hard to picture the woman who two years before stood up to Yul Brynner playing someone unable to stand up to an old woman half her size.

Just as good, this is a script that manages to get the most out of these characters in a relatively short time. We get a good sense of everyone here by the time the film is half over. We know who they are and how they think, and while their actions are sometimes surprising, they are never for a moment out of character or out of the realm of genuine possibility. We don’t get outrageous or extreme characters, but real ones, all of whom are broken in real and terrible ways, and in ways that affected everything they do and say.

In short, this is a human drama, and it’s one that works surprisingly well as a film. Delbert Mann was smart enough to simply let the actors take the characters where the characters wanted to go and stay out of their way. It makes for a solid movie perfectly acted, if one with an unclear and perhaps unsatisfying resolution.

Why to watch Separate Tables: A cast to kill for.
Why not to watch: Incomplete resolution.