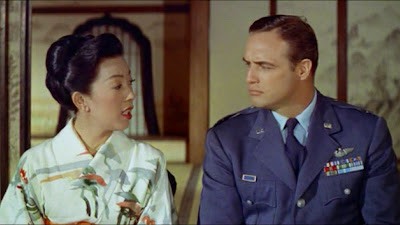 Hollywood has certainly been backward at times on any number of topics. One of the trickiest its had to deal with is racism. What I find interesting is how often a film that was progressive for its time comes across as incredibly backward when viewed today. Take, for instance, Sayonara. It wouldn’t be hard to argue that it was a film that genuinely helped to normalize Japanese culture in the United States, or at least de-mystify and de-romanticize it. And it deals with interracial relationships in a very real way. But it also suffers from a prominent instance of yellowface and portrays Japanese women as an extremely harmful stereotype. In some ways, the fact that a film so progressive for its time is so backward today is a testament to how far we have come.

The film takes place in 1951 at the height of the Korean War. Ace pilot Major Lloyd “Ace” Gruver (Marlon Brando) has racked up a number of MiG kills and, surprisingly, is transferred to Japan. Gruver, we learn, is the son of a 4-star general and is also romantically involved with Emily Webster (Patricia Owens), the daughter of another general. The main reason he has been moved to a desk job in Japan is because Patricia’s parents are surprising him by bringing their daughter over in the hopes that the two will marry.

Conflict arises almost immediately when it is revealed that Airman Joe Kelly (Red Buttons), Lloyd’s friend and subordinate, is in a romantic relationship with a Japanese woman named Katsumi (Miyoshi Umeki). Worse for Lloyd is that Joe plans to marry her. Such fraternization is strongly discouraged by the American armed forces (at least in 1951) and borderline illegal for officers. In fact, any American serviceman who marries a Japanese woman will not have his marriage recognized by the military, meaning that if he is transferred, he is barred from bringing his Japanese wife to the States with him. This does not sway Katsumi and Joe, and the two are married, with Lloyd as witness despite his misgivings.

Lloyd supports the no fraternization rule, agreeing with the men who turn away another military man (James Garner) and his Japanese date from an Americans-only club. As it happens, this woman is a part of a woman-only theater troupe whose members are also barred from American contact. Lloyd, intrigued, investigates and becomes infatuated with a performer named Hana-ogi (Miiko Taka). She hates Americans since both her brother and father will killed by Americans in World War II. However, as befits a Hollywood movie of the era, romance between the two blooms, come hell, high water, or the wrath of Lloyd’s commanding officer and the entire American military.

As mentioned above, for its time, Sayonara was incredibly progressive. It deals with the anti-Asian/anti-Japanese racism of the time directly and without apology. From a modern perspective, though, it is undeniably backward in its portrayal of the Japanese, and of Japanese women in particular. Katsumi, once married, becomes completely subservient to Joe. This may be an accurate portrayal of Japanese culture at the time, but it’s still difficult to watch. More disturbing is Hana-ogi’s reaction to Lloyd’s interest in her. After a short conversation where she discusses her past hatred of Americans, she essentially says that she’ll have a relationship with him if that’s what he wants, like she can somehow turn her emotions on and off like a faucet. It strikes me as very odd.

More reprehensible for the time is that there are instances of “yellowface” here. A prominent Kabuki actor is portrayed by Ricardo Montalban, for instance. Thankfully, this portrayal is done with a good amount of dignity rather than caricature, but it’s still pretty repellent. Evidently, the initial casting idea was to have Audrey Hepburn play Hana-ogi. Now, I love me some Audrey Hepburn, but that crosses a line.

Brando plays the part as if he were born and raised in a stereotypical part of the south, sounding at times like Elvis’s brother and at other times like Woody Harrelson’s father. He does the accent pretty well and fairly consistently, but it gets extremely annoying very quickly.

I appreciate what Sayonara tried to do. It put a face on this particular brand of racism and attempted to humanize and to an extent demythologize the Japanese people. For that, and for it’s time, it’s an impressive piece of film, But in the world of today, there are a lot of problems here that are almost insurmountable. I can try to view films from the perspective of their time, but for a lot of Sayonara, that’s just not possible.