I Looked Around to Find Her but She'd Gone 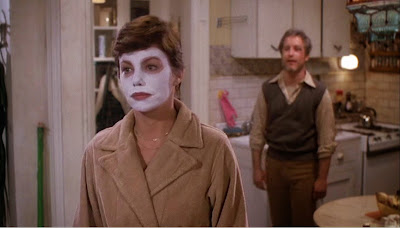 There’s a huge failing at the heart of The Goodbye Girl. This is a film that tries very hard to be likable, cute, and funny and parts of it are. Parts of it, though, and some of the main pieces that are to be likable, cute, and funny are absolutely the opposite. It takes what could have been a really solid entry into the romantic comedy genre and drops it down a few significant pegs. That’s kind of a shame.

This is not, as it happens, the first time I’ve seen The Goodbye Girl. I remember it as a film that had some things I really liked about it and a few things that I was iffy on. This rewatch has skewed my opinion in both directions. The things I like about this film I like very much; the things I dislike, I dislike far more than I remembered and dislike them almost to the point of distraction.

The story is very simple. An ex-Broadway dancer named Paula McFadden (Marsha Mason) and her young daughter Lucy (Quinn Cummings) live with an up-and-coming actor and are preparing to move from New York to California. Unfortunately for them, the actor runs out on them, leaving them behind and subletting his apartment from underneath them. The new renter is Elliot Garfield (Richard Dreyfuss), another actor, who has come from Chicago to New York to star in an off-off-Broadway production of “Richard III.” Naturally, Paula is terribly hurt by her recent dumping and unsure she can get back into shape to get work as a dancer. She’s resistant to leaving the apartment. Elliot strikes up a deal with her—he’ll share the apartment with her, but it’s under his rather strange set of rules.

There’s no real secret where this is going. Through a variety of trials and tribulations, the two eventually fall for each other. There are plenty of relationship issues, Elliot has trouble with his director, Paula can’t find work, and we’ll end up with the happy ending we want going into a film like this. All of that is fine.

So let’s talk annoyances. First is Paula McFadden, Marsha Mason’s character. She is the chief and principle problem with The Goodbye Girl. The problem is that at some level we are supposed to be rooting for her and sympathizing with her and Paula McFadden is a really terrible human being. She externalizes all of her problems, is resolutely angry about everything, and blames everything in her life that goes wrong on other people. At one point, around the middle of the film, Elliot—who has the power to kick her out on her no-dancing ass—asks only to be treated nicely. She assumes it’s a come-on for sex and stomps around like a child.

In any sane world, there’s no reason Elliot would stand to be treated like this, given that the lease is his and the law is completely on his side. And this is another major problem with the film. Paula is high maintenance like nobody’s business, and for the bulk of the film, the two are not only not in a relationship, they actively dislike each other. Ultimately, the romance between the two feels incredibly forced because there’s no way these two ever end up together.

The script reads very much like it was written as a stage play, which makes sense; it came from Neil Simon. However, this was written directly for the screen (thus the Best Original Screenplay nomination). But it doesn’t come across that way, which is a shame. There’s a huge difference between the two media, and it appears that Simon was still figuring that out with this script. Of particular note here is Lucy, who is a typically precocious young child. Certainly in 1977 when she calls her mother’s former lover a shitheel, the audience rolled with laughter. Today, a line like that comes off as someone sticking adult thoughts into a kid’s mouth for comic effect. It doesn’t work very well.

What’s good? I’ll probably take some heat for this, but Richard Dreyfuss is really good in this. He’s entertainingly wacky. He’s obviously a scripted character—there isn’t a person in the world who actually acts like him in this film, but he’s entertaining to watch. In a sense, he’s playing the actor version of the same character he did in Jaws. Elliot and Hooper are a sort of spiritual cousin. I also love the presence of Paul Benedict as Elliot’s insane director, forcing him to play Richard III as a flaming homosexual. Admittedly, the camp version of the play probably went over as a lot funnier in 1977 than it does now, but it still manages some humorous effect.

So, what we get is a film with a couple of good performances, an annoying character or two, and an ending that completely doesn’t match the story being told. It’s frustrating because The Goodbye Girl could have worked, even if it telegraphs where it’s going. It doesn’t, though, because the Paula McFadden character is so unlikable that the romance fails to be interesting.

Why to watch The Goodbye Girl: Richard Dreyfuss is worth watching.
Why not to watch: The Marsha Mason character is a horrifying person.