Despite All My Rage, I'm Still Just a Rat in a Cage 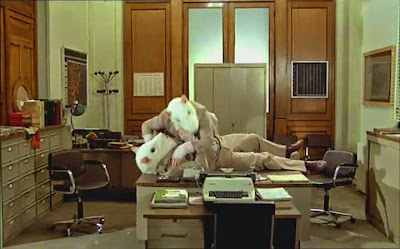 When a filmmaker does something truly different, it makes the job of a critic (or even someone who plays at criticism like me) much more difficult. On its surface, Mon Oncle d’Amerique is a film very much like any other. Three people have different stories that intersect in places and that are frequently affected by their past and their present. But the film is much more than that, because it is also something of a psychological study of the three people, that study being performed by Henri Laborit, who plays himself in the film as more or less a narrator and explainer of everything we see.

Essentially, the film is an exploration of Laborit’s ideas of how people function in society and what truly motivates us. In Laborit’s world, our higher brain functions exist essentially in service to those instincts that keep us alive. Those basic instincts are the need to survive, basic drives like sex, and the avoidance of pain. Frequently, our characters in the film are compared to rats in cages that elicit electric shock.

In fact, understanding these experiments is central to understanding the film itself. In one version of the experiment, a rat is placed in a cage divided into two halves. There is a door between the two halves. The rat quickly learns that when a buzzer sounds, a shock will be applied soon enough, and the rat learns to leave the side that will receive the shock. In this case, the rat, able to understand its situation, remains healthy. In the second situation, the rat is unable to leave its side of the cage. It quickly falls into despair unable to affect its situation. In the third experiment, the rat can no longer escape the shock, but is placed with a companion. The shock causes the rats to fight, but they are otherwise mentally healthy, able to turn their aggression of their situation onto another agent. The problem for people is that society prevents us this outlet when we are place in a situation beyond our control.

In presenting us with this basic idea, the film gives us the story of three people, each of whom finds him or herself in an untenable situation that cannot otherwise be escaped, an within which violence or aggressive behavior will result in greater problems. The three are Rene (Gerard Depardieu), a self-taught accountant working for a textile company; Janine (Nicole Garcia), an actress; and Jean (Roger Pierre), a government official. Jean and Janine have a long affair at one point, and eventually Janine goes to work as a designer for the company Rene works for. In each case, the three characters run across an antagonist or situation for which they are unprepared. Assuming Laborit’s ideas are correct, because each one is unable to act out aggressively, this situation will cause each of the three to develop health problems and exhibit symptoms of despair and anguish, as each is unable to affect the situation in any way and can get no mental or emotional release from it.

The real question here is whether or not this film would work with the vast amount of psychological information contained within. Long tracts of the film are more or less carried entirely by the voiceover. And it works. It works whether we’re looking at the characters or at rats in cages, or clips from old films that seem to exemplify the emotions the characters are feeling.

Where the film really dips into experimental territory is in the comparison of the people to the rats in cages. At times, we see re-enactments of previous scenes, this time with one or more of the characters costumed as white laboratory rats. It feels completely silly, of course, but it also works in a very strange way.

The more I watched this, the more I started to like when Laborit either appeared on screen or appeared as a voice telling us what we should expect. While it doesn’t specifically define the behavior we see, it gives us the context for it, a deeper reason for what happens behind what we can discern from what happens. Admittedly, the part with giant rats dressed in suits is pretty silly, but even that works to an extent.

There are pieces of this film that genuinely look like Godard could have directed. Take that either as insult or compliment as you will. On the whole, though, I found Mon Oncle d’Amerique to be fascinating, and more interesting than it would have been without the headshrinker science added in. That difference is all the difference, and a film that would have been just another relationship drama becomes something much more and much more interesting.

So what’s with the name? Each of the three main characters references an uncle in America as someone who left what was expected of him and died in America as a bum, although each suggests that such a fate was never proven. I leave it to you to connect that idea to the film’s story. As for me, the connection is an interesting one that fits in like the last piece of a puzzle.

Why to watch Mon Oncle d’Amerique: It’s unlike most movies you’re likely to encounter.
Why not to watch: Parts of it feel silly.