And a Little Bit of Soul

Film: Music of the Heart
Format: Streaming video from NetFlix on laptop. 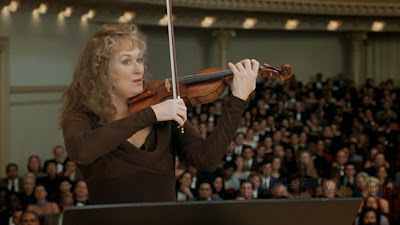 There were a number of surreal moments when I compiled the various lists I use for this Oscar project. There were moments of “That got a nomination?” all through the lists. None was so surprising or more interesting to me than discovering that horror icon Wes Craven had directed Meryl Streep to an Oscar-nominated performance in a movie about as far away from Craven’s roots as possible. I’ve said in the past that I think Craven is underrated and underappreciated as a director before. If nothing else, the man birthed four horror classics (Last House on the Left, The Hills Have Eyes, A Nightmare on Elm Street and Scream). That he also directed Music of the Heart, a film about a violin teacher working with inner city kids, only adds to my thesis.

But, we take the good with the bad in this film. Meryl Streep is an obvious positive, as are the presences of Aiden Quinn, Cloris Leachman, and Angela Bassett. The downside is that it also contains Gloria Estefan, which means there will almost certainly be Gloria Estefan (with or without her Miami Sound Machine) providing the title track and more. I should probably try to look positively on this as well. At least it’s not Maria Carey. Evidently, getting Elizabeth Pena was too much to ask for.

Roberta Guaspari (Streep) is the mother of two young boys and a husband who ran off with one of her friends. She’s moved back to New York to start over. Her mother (Cloris Leachman) insists she find herself a job. While working as a giftwrapper, she encounters Brian Turner (Aidan Quinn), a friend from years before and her eventual romantic interest in this film. He introduces her to Janet Williams (Angela Bassett), the principal of a public but alternative school in East Harlem. After a rocky interview, Roberta lands a job as a substitute music teacher.

Why music? Well, Roberta has a degree in music education. While following her husband around in his Navy career, she taught some and tried to set up some programs to teach kids the violin. And so, that’s what she begins to do with this group of inner city kids. It gets off to a rough start with kids who, in general, don’t want to participate or who simply don’t want anything to do with school, but because her own determination and hard work, the program begins to show results in the kids who participate in it, much to the chagrin and resentment of Dennis Rausch (Josh Pais), the school’s regular music teacher and a man not really concerned with teaching his students much of anything.

What we’re not going to get here is a tragedy or a story of epic proportions. What we get instead is sort of the opposite of a life of quiet desperation. We learn that Roberta is a harsh violin mistress, but that the kids respond to it. She wants what she wants, which means that her relationship with Brian has a surprising moment in the middle of the film, but one that makes perfect sense given what we have learned about her. We meet some of her students and, like her, live their successes and failures. In a very large way, this is a version of Mr. Holland’s Opus with the schmaltz and manufactured conflicts removed.

The way the film works is that the first two-thirds are there to set up the final act. Just as Roberta is getting back into live, starting to date again after 10 years of running her program, the education budget is slashed, and Roberta’s violin program is one of the first to go. So, the last third of the film is about her fighting for her life, the life of her program, and the education of the kids under her care. It’s trite to call this inspiring, but it absolutely is. It’s a hell of a good story, and it’s one worth seeing. In truth, the movie really ends with about 20 minutes to go. The end is the ending that we need after going on this journey, and it’s all okay and completely forgivable.

But for me, it’s all about seeing a film with this story directed by Wes Craven. How awesome is it that we live in a world in which Wes Craven directed a scene with Itzhak Perlman and Isaac Stern?

Look, Music of the Heart isn’t going to set the world on fire. It’s predictable in a lot of ways, but it’s genuinely heartfelt and it has a solid cast. Even Gloria Estefan, who I genuinely dislike as a musician and singer, is pretty good in her role as a second grade teacher. It’s hard to dislike a story about someone dedicating her life to helping kids, particularly when the story is told with this much warmth and (dare I say it?) heart.

Why to watch Music of the Heart: To prove to yourself that Wes Craven can do more than horror.
Why not to watch: Despite its “based on a true story” origins, you know where it’s going.