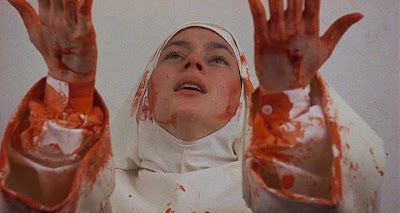 A lot of general topics show up on the Oscar lists over and over again. For whatever reason, there is an awful lot of nuns on my lists. Perhaps there are people out there who find the very idea of nuns to be compelling. Perhaps it’s that nuns live such an unusual lifestyle that they are compelling by their very nature. Or perhaps it’s something else. With Agnes of God, it’s very much this something else. While based on a stage play, Agnes of God translates nicely to film in part because of its high concept.

So what is that high concept? Simple: a true innocent, a nun named Agnes (Meg Tilly) who has been raised virtually her entire life in a convent, gives birth to an unexplained child, not the least of that lack of explanation being that the mother is a nun. Just as problematic, the child is discovered dead shortly after the birth, with the umbilical cord wrapped around its neck. The court appoints a psychologist named Martha Livingston (Jane Fonda) to unravel what happened. Dr. Livingston (and yes, there are a few “I presume” jokes) is both aided and thwarted by the efforts of Mother Miriam Ruth (Anne Bancroft) who wants to both avoid further scandal and protect Sister Agnes.

The bulk of the film is the tracking down of what actually happened on the night in question as well as the source of Agnes’s pregnancy. This means that Agnes of God plays out in large part as a murder mystery, with Dr. Livingston acting as our Sherlock Holmes. Slowly, bit by bit, the mystery is unraveled to tell us not about the father responsible, but about how he might have made contact with Agnes in the first place. At first glance, the only man to have contact with Agnes is an aged priest, who readily admits that even with a willing spirit, his flesh is far too weak to make that happen. As we watch, the film reveals a single puzzle piece at a time, leading us to an inevitable and terrible realization and conclusion.

While there are a few nuns, priests, and court officials that wander through the film, essentially the focus is on the three principle women. Mother Miriam Ruth is a hard woman but a pragmatic one. She believes Agnes to be a true innocent and untouched by the things of the world. The dead infant, of course, is a tragedy to her, but probably for the best, especially if that allows the convent to return to its tranquility. Anne Bancroft plays the role interestingly. Her portrayal of Mother Miriam Ruth walks a fine line between obstructive protection of Agnes and careful helpfulness to Dr. Livingston. It’s easy to like her and just as easy to mistrust her, a difficult blend of characteristics to portray to an audience, but Bancroft does it flawlessly.

The second performance of note is that of Meg Tilly. Agnes needs to be a naïve, but also needs to be believable for anyone to buy the premise of the film. Tilly plays the character as if she is more or less borderline insane, almost as an extremely imaginative and religious child. It’s the right choice for the role. It’s less important that anyone in the film believe in Agnes; it’s far more important that we believe the portrayal. We must believe that Sister Agnes truly doesn’t understand childbirth or sex, or virtually anything of the world outside the convent.

Sad to say, the weakest link of the three is Jane Fonda. Fonda does a creditable job in the role of the psychiatrist desperate to figure out exactly what happened to Sister Agnes, but she is not particularly exceptional in the role as presented. I’m not sure I can picture someone else in the roles of Miriam Ruth or as Agnes, but any solid actress could pull off Fonda’s part here. It’s good, it’s solid, but it’s nothing to get excited about.

One thing that bothers me is the presence of stigmata. It happens twice in the film, both times to Sister Agnes. The first, we are told that she displayed stigmata in the past, and that’s easily written off as a piece of fantasy. The second time, however, it happens essentially in front of our eyes—Agnes suddenly has holes in the center of her palms that are dripping blood. It’s an unnecessary thing in a film that really doesn’t require an actual moment of religious fervor. The initial occurrence we can easily attribute to Agnes’s borderline insanity and religious mania, but when it happens suddenly with witnesses, we are immediately thrust into the realm of the supernatural. The film didn’t need this at all.

Why? Because it lends an air of the divine to something that is, really, a story about the sudden appearance and murder of an infant in a place where no infant should be and no murder should occur. As it happens, everything has a completely temporal and non-deified explanation. Why toss this in?

It drags the movie down in my opinion, although your mileage, or the mileage of someone of a more theological bent, might well be different. It makes what could have been a unique mystery into something that involves an even bigger, completely unexplained mystery. Fortunately, we have solid performances here to buoy it, which makes it worth watching, if not worth loving.

Why to watch Agnes of God: A stellar cast and a good (realistic) resolution to the mystery.
Why not to watch: The stigmata thing doesn’t work for me.