Film: The King and I
Format: DVD from Northern Illinois University Founders Memorial Library on laptop. 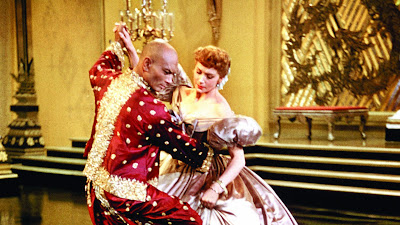 While I’m not a massive fan of musicals, there are a few that are, more or less, required; you pretty much have to like them. I’d put The King and I into that category, or would have without question before today. It’s still a film that I have a great deal of respect for, but I can’t say that I’m as excited by it now as I may have been a couple of years ago since it had been years since I had seen it. Well, I’ve watched it again now, and it hasn’t aged quite as well as I could have hoped it would have.

The story is almost high concept in its simplicity. A traditional British widow named Anna Leonowens (Deborah Kerr) and her son Louis (Rex Thompson) agree to come to Siam in the 1860s to act as a tutor and teacher for the many children of the king, Mongkut (Yul Brynner). The film is very much a clash of cultures, as Anna learns to deal with the extremely non-British culture of Siam and Mongkut learns to appreciate a point of view very different from his own. And, since this is a musical, there’s a lot of singing and dancing involved. This is a more traditional musical in the sense that the songs are not so much performances, but instances of people publically singing their feelings.

That’s all well and good, right? It’s a simple story and all of our conflict, or at least most of it, is going to come from Anna’s expectations being very different from her reality and Mongkut’s demands being slowly but decisively tweaked by Anna. There are plenty of moments of Anna being shocked at the behavior of the Siamese, including Mongkut’s sizable harem and vast number of children and her being forced to live in the palace despite being promised a house of her own. Mongkut’s entire purpose is to modernize Siam, to make it a nation that belongs in the modern world; Anna is one step in that desire, as he hopes that she will educate the future rulers, including Mongkut’s son and heir, Chulalongkorn (Patrick Adiarte).

There are, of course, problems along the way. On point of contention that happens almost immediately is the presence of Tuptim (Rita Moreno), who is a gift to Mongkut from the king of Burma. Sadly for Tuptim, she is to become just another wife in the harem of the king. More’s the pity, she has fallen in love with Lun Tha (Carlos Rivas), a Burmese man who has brought her to Mongkut. This comes up several times in the film, and ultimately is the catalyst for the third act.

There are a lot of things that go right with The King and I. First and foremost is Yul Brynner himself. I think no other actor, particularly no other actor with as varied a career, is as associated with a single role as Brynner is with Mongkut. He performed the role more than 4,500 times on stage as well as this performance on camera, and it’s evident that he knows this character inside and out. If the rest of the film were terrible, it would be worth watching strictly for Brynner. There is a joy in watching him perform, in his pronouncements as the king, and his blend of fascination and frustration with the West and with Anna. Deborah Kerr is fine in the role, although I think it’s one that could have been just as ably performed by a number of other actresses of the time. She deserves some credit for managing to perform at all in the massive dresses she is forced to wear. Seriously, each dress could provide enough material for a family of four. Her wardrobe is almost a character in and of itself.

There are a few very good numbers in the film as well, none so spectacular as “Shall We Dance?” It’s not so much the singing for that song that is memorable, but the truly energetic dancing. For spectacle, Tuptim’s version of Uncle Tom’s Cabin is noteworthy, although it’s also too long for the film. That sequence, the bastardized version of Stowe’s book, is nearly 15 minutes long. It is, however, pretty to watch.

Finally, in a movie that is in a very real sense a departure from reality, there is something very real about the relationship between Mongkut and Anna. The film has a real problem with stilted dialogue and delivery that belongs more on the stage than on the screen. This is never true of any interaction between Anna and Mongkut, who are always believable, and especially when they are playing off each other. The sparks between them work perfectly, as does the slowly growing affecting leading up to their dance together. Is it a romance? Kind of, but not really, since neither of them dares push it to that level.

Where Deborah Kerr and Yul Brynner are terrific and natural together, though, most of the rest of the cast (excepting Rita Morena) are stilted. Frequently, they speak as if they were acting in a theater in front of a live audience rather than to patrons of a cinema. It’s an easy way to get pulled out of the movie.

A bigger problem is that with a couple of exceptions, the songs are really unmemorable. “Getting to Know You” and the aforementioned “Shall We Dance?” are exceptions. The rest simply exist. Oh, I suppose “It is Puzzlement” is decent, but even that one isn’t spectacular; I couldn’t hum it for you if you paid me, and I just finished watching an hour ago. The pageantry is there, but not much in the way of memorable songs aside from the two.

The biggest problem for me, though, is the third act. The story simply doesn’t work for me once Mongkut and Anna have danced. The way the king reacts to problems and the ultimate conclusion and denouement appear to be in place because a specific end was desired rather that putting in an ending that made more sense. It simply doesn’t get to that conclusion very honestly.

As I mentioned at the top, I’ve seen The King and I before this. Before this viewing, my memories were clouded by the positives that have stuck with me. This current viewing reminded me of some serious flaws that need to be taken into account.

Why to watch The King and I: Some classic moments and the majesty that is Yul Brynner.
Why not to watch: It’s probably not as good as you remember.