You Don't Pick Your Parents 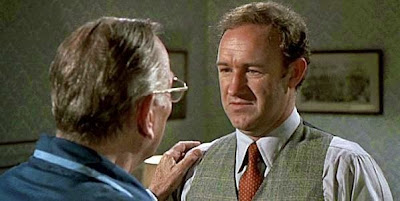 Lots of people have a strained relationship with one or both parents. Because of this family stories are fertile ground for drama. I suspected from the title I Never Sang for My Father that we’d be heading in that direction here, and I wasn’t wrong. This film explores the relationship between father and son, primarily from the son’s perspective, and it does so beautifully.

Gene Garrison (Gene Hackman) is a college professor whose wife has recently died. We find him in the airport waiting to great his parents on their return from Florida. We also learn virtually everything we need to know about their relationships when his parents get off the plane. Gene’s father Tom (Melvyn Douglas) is a man who is the very definition of self-made. He thinks highly of himself and a lot less of everyone else, including Gene. His mind is also starting to go a bit; moved forward to a more modern setting, and Tom Garrison would be in the early to middle stages of Alzheimer’s disease. Gene’s mother Margaret (Dorothy Stickney) is physically frail, having survived a heart attack, but mentally strong.

Gene, we soon learn, is involved in a long-distance relationship with Dr. Peggy Thayer (Elizabeth Hubbard). It’s Gene’s plan to move to California and marry her, something his father is set against on the belief that it will “kill his mother” if he were to abandon them in this way. This is despite his mother’s wanting him to go and be happy. It’s soon evident that Tom is merely projecting his fears—he depends on Gene a great deal despite being frequently dismissive of him, and were Gene to leave it would be a blow he may not recover from.

This soon becomes evident when Margaret Garrison suffers another heart attack and dies. The return of Gene’s sister Alice (Estelle Parsons) causes additional tension. Alice was banished from the family years ago for having the temerity to marry a Jewish man, and has had virtually no contact with her father in the years following her marriage. She insists Tom get a full-time housekeeper, which he refuses to do out of hand. Gene then explores nursing homes in one of the most impressive scenes in the film.

What this film does extremely well is create the character of Tom Garrison. This is a man who is completely self-absorbed. Any acts of condolence about his wife’s death immediately become about himself and stories of his life. The actions of his children, Gene in particular, are all directed at himself as well, at least in his own mind. And this is the way he has always been; he knows of no other way to be. There’s a reason Melvyn Douglas was nominated for this performance: he’s damn good. Tom Garrison is a charming old man to those who don’t know him well and a tyrant to those who do.

There are a few other things worth mentioning here as well. The first is Estelle Parsons. She’s not in the film for long, but she makes a devastating impact. For the life of me, I can’t understand why she wasn’t nominated in a supporting role. She manages to project the hurt of all of the wrongs done to her and still stand on her own as a person capable of feeling something for the man who did her so many terrible hurts. I was sad when she left the film, because her presence was a good and genuine one.

Gene Hackman is worth a mention, too. This is not the sort of role Hackman normally portrays. He’s easy to imagine as a more larger-than-life character, a man standing astride the film and forcing the attention on him. Here, he is almost subdued, a man beaten down by the father he is desperately attempting to have a relationship with.

The biggest complaint I have with the film is that at times, the music heads toward the maudlin, where it is overtly pulling at our emotions. However, director Gilbert Cates has the wisdom to drop the music completely in the moments that are the most emotionally gutting, letting those moments speak for themselves. There are other times when the music is used brilliantly, although this is the biggest complaint I’ve seen about the film. When Gene tours the nursing home, the music becomes appropriate for a horror film, which is exactly what the scene needs to reflect Gene’s thoughts. This is one of the better scenes in a film with a number of good scenes.

Films like I Never Sang for My Father are the reason I pursue films on a list. There would have been no reason for me to ever watch this had it not been one that I “required” of myself. I’m happy to have seen it.

Why to watch I Never Sang for My Father: Family relationships are a never-ending mine for drama.
Why not to watch: Are you geared up for living out your own family frustrations vicariously?

Posted by SJHoneywell at 2:07 PM