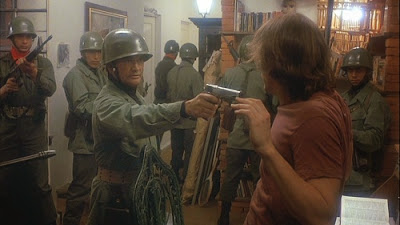 You know you’ve made it as an official badass filmmaker when the United States government is forced to make a statement on the film once it is released. Additional street cred is available when your film is temporarily pulled from distribution because the filmmaker and its company are being sued by a former U.S. ambassador for defamation of character. Welcome to the world of Costa-Gavras’s Missing. While Missing never mentions Chile, it is quite obviously about the coup against Salvador Allende. Former ambassador to Chile Nathaniel Davis and others sued director Costa-Gavras, MCA, and Thomas Hauser, author of the book “The Execution of Charles Horman: An American Sacrifice.” Missing wasn’t re-released on DVD until 2006, meaning that in a lot of ways, we’re lucky to be able to see it.

First, a short and extremely cursory history lesson. Salvador Allende was a democratically elected president of Chile. He also happened to be a Marxist, which immediately made him the enemy of the American government. In 1973, a military coup deposed and killed Allende, putting General Augusto Pinochet in his place, a military junta that ruled in Chile until 1990. Charles Horman was a real person, and he really did disappear in Chile during the Pinochet coup, and as the name of the book indicates, Horman disappeared only in the sense that he was taken and killed.

Charlie Horman (John Shea) has aspirations of writing and is in Chile with his wife Beth (Sissy Spacek) and their friend Terry (Melanie Mayron). Charlie and Terry are away from the capital when the coup happens, and they are stuck away from Beth and their home. Eventually they make it back and decide that it is time to leave, but the planes are no longer flying and the American embassy is of no help. Shen she misses her bus, Beth is forced to spend a night outside after curfew. When she finally makes it back home, she finds that Charlie is gone. Reports from neighbors vary, but it soon becomes evident that Charlie has been picked up without a trace.

After two weeks, Charlie’s father Ed (Jack Lemmon) arrives in Chile to help locate his son. What he encounters is a deepening web of conspiracy, terror, political evil and bureaucracy. Charlie, as it happened, wrote for a left-leaning newspaper, which made him a person of interest in the new Pinochet government. More problematic, he found evidence that the U.S. military was heavily involved in the coup, something which the American government continues to deny to this day. Slowly but surely, it becomes apparent that Charlie hasn’t merely disappeared. While Beth and Ed fight at first, they band together by the end, wanting not justice but simply the truth.

As good as Sissy Spacek is in this, Missing is completely Jack Lemmon’s film. It is Ed Horman who undergoes the most brutal and terrible change between where the film starts and where it ends. When he first arrives in Chile, Ed is as gung-ho American as it is possible for him to be. He disapproves of his son and Beth living in Chile in the first place. He assumes that his son is little more than a long-haired hippie and that Charlie has been led astray by Beth. He trusts the American government implicitly. When he arrives, he is convinced that he can find his son, give him a perfunctory slap on the wrist and go back to New York. By the end, Ed has grown up in a very real way.

The great strength of Missing is its story, which is not to denigrate the performances at all. But the story is one of real intrigue, real horror, real terror. The film itself is carefully made, and Costa-Gavras is a director who is smart enough to let the story speak for itself and to let the actors simply play the roles. The camera work isn’t fancy, but is perfectly used to allow the story to work itself out and to let us see Ed Horman go through his rollercoaster of emotional states. This is powerful stuff, the sort of film that leaves a serious mark. Everyone grows up a little bit.

In a real way, Missing isn’t so much about Charlie Horman’s disappearance, but his father’s slow realization that the American government does the kind of things that we only accuse our enemies of doing. While it is Charlie himself who is missing, by the end of the film, what is missing is Ed Horman’s faith in everything that made his life real to him up to this point.

Why to watch Missing: A sobering story brilliantly told.
Why not to watch: If you think we don’t do bad things, you’ve got a lot of growing up to do.