Film: Wallace & Gromit: The Curse of the Were-Rabbit
Format: DVD from personal collection on laptop. 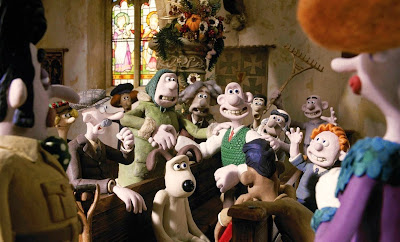 I’ve loved Wallace & Gromit for years. More than a decade and a half ago, a friend gave my wife and me a copy of The Wrong Trousers for Christmas. There’s a lot to love with most of the Aardman films. First, the Claymation is fantastically good, using everything from the stop-motion catalog created by Ray Harryhausen and adding a number of impressive tricks of their own. Second, and just as important, Aardman films tend to be astonishingly clever, filled with jokes for the entire audience as well as references that only the adults will get. I’d seen Wallace & Gromit: The Curse of the Were-Rabbit before tonight, but I was in a mood for it. My sister and I get together and watch horror movies every few months. Today, I had her watch Dog Soldiers, so I guess I’m in a lycanthropic mood.

Our heroes are Wallace (Peter Sallis), a cheese-loving inventor and in this film pest-control specialist and his dog Gromit, who never makes a noise. As with the Wallace & Gromit shorts, it’s soon evident that Wallace’s inventions are (pardon the pun) hare-brained and that Gromit is both the real brains of the operation and the only one with any common sense. In this film, our heroes are running a pest control business (called Anti-Pesto) that specializes in the humane control and capture of vegetable stealing rabbits. This is important, as the town’s main yearly event, a vegetable growing competition, is in danger due to a surge in the rabbit population.

Wallace and Gromit hit the big time when they are called in to control the massive rabbit population of Lady Campanula Tottington (Helena Bonham Carter). Lady Tottington’s main suitor, Victor Quartermaine (Ralph Fiennes) would prefer to give in to his hunting nature and shoot the critters, but she refuses to let him, preferring Wallace’s humane capture methods. There’s a spark of attraction between Wallace and her ladyship as well.

After capturing Lady Tottington’s extreme rabbit infestation, Wallace decides to bring science and technology into the problem. His idea is to use his new mind manipulation device to get the rabbits to dislike vegetables the way he does, using moonlight for extra power. Of course things go terribly wrong, and instead of curing the rabbits of their love of carrots, Wallace himself becomes a giant were-rabbit and begins terrorizing the neighborhood produce. Once Gromit realizes this, the rest of the film concerns his attempts to capture Wallace, curtail his nighttime vegetative predation, and cure him of his recent lycanthropy.

Like all of the Aardman films, The Curse of the Were-Rabbit, in addition to having its own coherent and cohesive plot also references a number of other classic films and makes a number of jokes of its own. And in Wallace and Gromit tradition, the conclusion of the film comes with a series of crazy animation and Rube Goldberg-like hijinks that somehow work out in the end. It may not make complete sense in the end, but everything ends happily the way we want it to, and it makes enough sense that it’s satisfying.

The biggest issue I have with Aardman films in general is that because they are so precise and take so long to create that they can only produce a film every few years. The Curse of the Were-Rabbit was the first full-length feature from the studio in five years, and it comes in at about 85 minutes including the closing credits. It’s just not enough. The process is so painstaking and Aardman always includes such a massive amount of detail that their output is so limited. On the other hand, it’s a part of what makes their films so special.

Better, a film like The Curse of the Were-Rabbit manages to hit all the right notes. It’s completely appropriate for kids of any age. No child, not even the youngest and just barely able to watch a movie will be scared of a giant, fuzzy bunny. Sure, the townspeople in the film are scared, but not for themselves, and there’s nothing traumatizing here at all. It’s just good fun and clever and wildly entertaining.

Stop-motion filming was something of a lost art until Nick Park and Steve Box made it something this good again with their films, particularly Chicken Run, The Curse of the Were-Rabbit and the Wallace & Gromit shorts. It’s hard to believe at times that these films are actually stop-motion with the amount of detail and virtually seamless animation throughout. Films like this are also completely rewatchable, since there are hidden jokes and puns everywhere, and every viewing reveals more.

If you haven’t seen an Aardman film, you could do a lot worse than this. Any of the Wallace & Gromit films are worth your time, though. Even if you don’t care about the silly stories or the entertaining situations and characters, watch and be amazed at the animation. It’s truly something special.

Why to watch Wallace & Gromit: The Curse of the Were-Rabbit: Because Aardman’s work is top of the line animation and clever as hell.
Why not to watch: Chicken Run is still a better film, but was released the year before animated films had their own category at the Academy Awards.