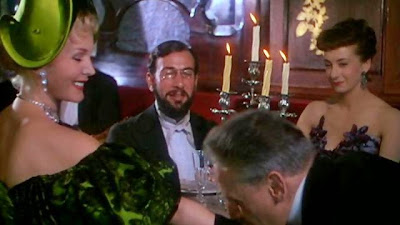 I’ve been public about my dislike of the 2001 film Moulin Rouge!, so I’d be lying if I suggested that I was incredibly excited about seeing the version from 1952. Imagine my relief to discover that the one from a decade or so ago was not in fact a remake of the earlier film. Rather than being a romance that strongly mimicked Titanic, this film is almost a biopic of Henri Toulouse-Lautrec. I won’t be lying when I tell you it felt like I’d dodged a bullet.

Anyway, we open at the eponymous Moulin Rouge, a nightclub/dancehall/disreputable bar in Paris. There’s dancing and singing and a lot of infighting between the dancers, especially La Goulue (Katherine Kath) and Aicha (Muriel Smith). We are also introduced to the club’s chanteuse Jane Avril (Zsa Zsa Gabor) and, of course, Henri Toulouse-Lautrec himself (Jose Ferrer). It’s not until the place closes that we really get a look at him, though. When he stands up, we discover that he is terribly short, like 4’6” short, and that this is primarily from a pair of seriously truncated legs.

As he walks home, we get the history of his life, including the accident that broke both of his legs and their failure to heal properly, which caused him to stop growing. This problem with his bones is blamed on the fact that his parents were first cousins. Fearing problems with future children and, as a noble, for his inheritance, Henri’s father (also played by Jose Ferrer) leaves the family. When he comes of age, Henri decides to go to Paris and become an artist, something for which he had a great penchant.

On this same walk home, he comes to the rescue of a prostitute being pursued by the police. She is Marie Charlet (Colette Marchand), and she forms an immediate attachment to her benefactor, or at least he thinks so. For anyone watching, it’s soon evident that Marie is using Henri for money and a place to stay and consistenly is rude to him, makes fun of his stature, and is probably running out on him every time she leaves the apartment. Eventually, he kicks her out and then falls into a deep depression. When he finds her, he discovers that she has been entirely false to him, which causes him to contemplate suicide. However, it’s his art that saves him. He begins creating posters for the Moulin Rouge (for which he gets to drink freely) while spiraling into alcoholism.

The final love of his life comes in the form of Myriamme Hayam (Suzanne Flon), a widow who has contemplated becoming the mistress of a wealthy man but ultimately decides against it. Toulouse-Lautrec becomes infatuated with her but hides his feelings because he has been hurth multiple times in the past. She hides her feelings from him as well, which leads ultimately to more alcoholism and our conclusion, which I will not spoil.

There are some good things in Moulin Rouge, among them the performance of Jose Ferrer. Sure there are moments when you can tell you’re watching a film from the middle of the last century, a few stilted line readings and some overaction, but overall, Ferrer is excellent all the way through. It’s evident in places that someone else was used for some of the scenes, or that he was walking in a trench in places, but there are times when we see him full-bodied and walking. The word is that he rigged up a device to strap his legs back, and for that alone, allowing him to walk on his knees, and for that alone I give the man a huge amount of credit. I’m guessing that in those cases, the cane wasn’t merely a prop.

I also like the pair of sequences that are almost documentary-like in terms of showing the art of Toulouse-Lautrec. I can’t call myself a huge fan of the man’s art but I appreciate it and I like how different it is from everything else. Seeing so much of his work this nicely displayed is a big bonus for the film.

I also like how certain parts of the story play out. For instance, despite his stature, Toulouse-Lautrec is still a member of the nobility, which lends him a certain social power. However, as the film starts, he doesn’t press this much. The Moulin Rouge was a place for the outcasts and those who didn’t fit into society. The posters made by Toulouse-Lautrec increased the popularity of the place, but also made it respectable, which destroyed the place for him, La Goulue, and pretty much everyone else. This isn’t a necessary touch by any means, but I liked that it worked nicely into the screenplay.

That said, the biggest problem with Moulin Rouge is that it’s just kind of dull. The story is good, but the romance is a non-starter (by design), which means the film shoots itself in the foot right off the bat. I’m glad I saw it and enjoyed it for what it was, but it’s not a film I’ll need to see again.

Why to watch Moulin Rouge: A good story and a damn fine performance from Jose Ferrer.
Why not to watch: It’s ultimately kind of dull.