This is the seventh in a series of monthly reviews suggested by Nick Jobe at YourFace. 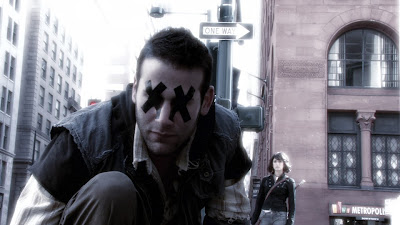 Nick has taken me to some unusual places in the past seven months as well as on our old podcast. Few are as strange as Ink, an indie film from 2009. Ink was made on the sort of budget that Michael Bay uses for a couple of days’ worth of Craft Services. There are times when that budget shows and many times where it looks as if writer/director Jamin Winans was well-funded. It leaves me with an interesting movie to discuss for the next several hundred words.

The plot…well, that’s kind of difficult because I’m not sure I fully understand it myself. I’ll do my best. Ink posits that there are creatures called Storytellers who give us our good dreams and there are evil creatures called Incubi who give us nightmares. There are also other spirits called Drifters that are neither one nor the other. One of these, named Ink, kidnaps a young girl and takes her to this other realm where these creatures live. In our world, young Emma (Quinn Hunchar) falls into a coma caused by some sort of undefined seizure.

With her kidnapping, the Storytellers call on Jacob (Jeremy Make), who is both blind and something called a Pathfinder. Unlike the Storytellers and Incubi, Jacob can produce actual results in the real world. He does so, causing a car accident that puts a businessman named John (Christopher Soren Kelly) into the hospital.

As it happens, John is Emma’s father. We learn that John no longer has contact with his daughter. His wife was killed in a car accident, and thanks to this, he has devoted himself to his business during the day and to drugs and booze at night to dull the pain. On the verge of a major deal, his estranged father-in-law begs him to come to the hospital on Emma’s behalf. He refuses, and thus we have the car accident that puts him in the same hospital, ostensibly to battle for the life of his daughter, but actually to battle for his own soul.

See, Ink wants to become an Incubus, and the only way he can do this is to bring the girl to the Incubi. Emma is almost rescued by a Storyteller named Liev (Jessica Duffy), but she is also captured by Ink and brought, essentially to trial. Her job, more or less, is to keep Emma calm and to inform us as an audience about what is happening, which she does to varying effect.

There are some excellent visuals in Ink, and these are the main reason I enjoyed the film. When Emma is kidnapped, there is a battle between Ink and several of the Storytellers. It’s a fantastic sequence, because all of them are unable to affect the real world. As they battle each other, smashing furniture and the like, everything they destroy immediately repairs itself as if nothing happened. The Incubi are beautifully realized as well. Each projects his face onto a screen a few inches in front of himself, which lends each scene they are in a visual that reminded a great deal of Brazil.

It is an imaginative vision, and it deserves a great deal of credit for that. This is all the more impressive because the film was made on a budget of $250,000. There are times when it looks like its budget, for which I forgive it. I do, because there are plenty of times when it looks like it was made for more than ten times what it was. Director Jamin Winans is evidently of the school that every dollar spent should appear on screen, and with a small budget like this one, that is absolutely the right attitude to have. The look of the Incubi is absolutely inspired. When they remove their face screens, their eyes glow. I’m certain this was not a costly effect, but it looks fantastic and adds an additional fantasy element to the film that works perfectly with everything else.

The film falters in a couple of places, some unimportant and some that have real consequences. I have real difficulties with the look of Ink himself. We get something like an excuse for his appearance, but it soon becomes evident that this guy has a nose that, first of all looks fake and second of all would put Steve Martin in Roxanne to shame. I get that Ink is supposed to be “scarred,” but I don’t get where an 18-inch nose fits in with that. Similarly, we gather that Jacob is blind because he has black electrical tape x’s on his eyes. Sunglasses wouldn’t work? It just looks cheap.

A bigger problem is with Jeremy Make himself in the role of Jacob. There are times when he plays the role as if he is trying to emote through the screen. He’s trying far too hard to be far too cool, and it comes across as fake. He does have a lovely scene when “conducting” the real world to cause the eventual accident, but most of the time, he’s pushing too hard to be cool and not hard enough to be natural.

The biggest problem, though, is that Ink has a very interesting perspective on race. It may be trying to be progressive in a lot of ways, but it ends up conforming to a lot of unfortunate stereotypes. The Incubi are, almost to a man if not completely, both white and male. The Storytellers are almost all non-white, non-male, or both. And yet the Storytellers are working in service to a white man and his little blonde daughter. Something there doesn’t sit right with me.

Nick, I give half credit for the story, full credit for the visuals, and a bonus for the fact that this was made with what most movies spend on craft service. I’ll round that up to full. You’re 5.5 for 7.

Why to watch Ink: It’s amazing what someone very creative can do on a limited budget.
Why not to watch: Some bad makeup and a weird racial perspective.