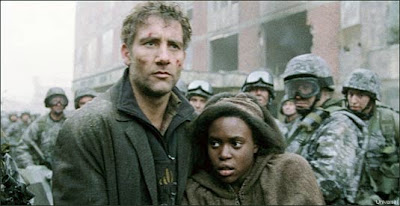 For what it’s worth, the class of 2006 Best Picture nominees is a strong one. That’s a good thing because 2006 was a surprisingly strong year with a number of movies that will be talked about for a very long time. This would have been a very interesting race with an expanded field, and there are more than enough films here to double the list of nominees without straining at all. I’m sure I’ll get some resistance on Once, but I loved it. Children of Men and V for Vendetta are sadly the wrong genre, but fantastic, and I’m still a little surprised at the lack of Best Picture nominations for The Last King of Scotland and United 93. Switching to non-English language films, we have a very rich crop including Pan’s Labyrinth, The Lives of Others, Apocalypto, The Host and Volver. If you were hoping to see me pimp The Prestige, keep hoping; I think The Illusionist is far superior. This was also the year Casino Royale was released, and while I don’t think it deserved a nomination, it was a hell of a lot better than most would have guessed.

5: Of the five nominees, the one I’d be most willing to pitch in favor of something else is Little Miss Sunshine. I enjoyed this movie well enough, but I’m still mildly surprised it managed a Best Picture nomination. The performances are good, the script is both funny and tragic (which Oscar seems to like) and I can’t find a great deal of fault with it, but Best Picture? It seems like such a stretch. I think it got caught up in a wave of enthusiasm and I’m not sure it warranted the vast amount of completely positive press it got. Good, yes. Great? I’m not so convinced.

4: I had relatively low expectations for The Queen but found it to be a film that I rather enjoyed, but also a film I’m not sure I need or want to watch again. This is a film that is very much good and possibly great. It also manages to significantly humanize Queen Elizabeth II, turning her from a figurehead into a very real person with concerns that, despite being of a royal nature, are perfectly understandable. It’s a hell of a good film, but there are films I simply liked better in 2006. 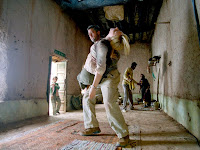 3: The thing I like most about Babel is how ambitious it is as both a film and as a narrative. The entire point of the film is to show us how the world is tightly interconnected, with an event in one place having a massive impact somewhere halfway across the world. It’s problem is that the same sort of movie (Crash) won the previous year and is widely considered one of the most undeserving winners in Oscar history. I liked Babel well enough, but it might simply be too overwhelming a story. I think it lost because of Crash. It loses my support because it's just too much.

2: With The Departed, everyone breathed a sigh of relief; Martin Scorsese finally got a Best Picture win and a Best Director win, too. Hell, I’ll admit that I was happy for him, too. Unfortunately, since The Departed, while excellent, is not Scorsese’s best film by any stretch, it comes with the slight taint that it was awarded because it was time to give one to the man. I can make a solid argument for this film because I think it is genuinely great and features scads of top-of-their-career performances, but it’s not my favorite from 2006, despite being a good (and really, overdue) choice.

1: All of this means I’m going with Letters from Iwo Jima, Clint Eastwood’s paean to the Japanese side of the battle of Iwo Jima in World War II. There’s not a thing in this film that I would change. I love the washed-out look of the film, I love the fatalism of it. I particularly love how carefully it is made, with men from a culture radically different from the West and different in many ways from the modern world made so real, human, and understandable. This is top-notch filmmaking that depicts war not as we might imagine it but as it really must be, and shows us that the “bad guys” are often just as scared and human as the rest of us. Hell of a film, and of these five, my choice. 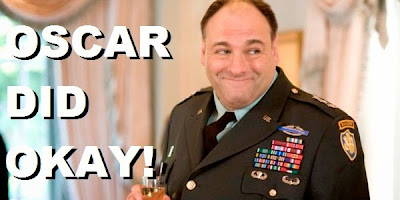