Film: The Bells of St. Mary’s
Format: Streaming video from NetFlix on laptop. 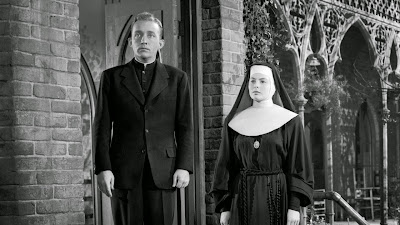 I had hopes for The Bells of St. Mary’s. I really did. I enjoyed Going My Way a lot more than I thought I would and more than I remembered from my childhood. A big part of that was the likable presence of Bing Crosby in a role that suited his personality and cinematic presence. I guess a sequel wasn’t completely out of bounds. The problem is that with any sequel, there’s a need to capture the magic of the first film, and The Bells of St. Mary’s tries, but fails.

The only constant from the first film is Father Chuck O’Malley (Crosby), who has evidently maintained his role in the church as a priest sent to problem areas to set churches and parishes aright. In this case, the parish belongs to St. Mary’s and comes with a school. Of course, the parish is in trouble. In this case the school is old and starting to fall down a bit. The sisters, led by their unaccountably young and gorgeous Mother Superior Sister Mary Benedict (Ingrid Bergman) were forced to sell off a nearby plot of land to pay for some of the repairs. The buyer, a businessman named Horace P. Bogardus (Henry Travers) has put up a massive office building on the spot. His dream is to have the school condemned so that he can put in a parking lot. The sisters, and they are legion, are spending their time in prayer that Bogardus will donate his finished building to St. Mary’s to use as a new school.

That’s the main plot, but of course there are smaller plots that wind their way through the film as well, much like Going My Way. One of these plots concerns one of the boys in the school who is being bullied by another boy. Initially, the boy has taken the advice of Sister Mary Benedict and literally turned the other cheek, which earned him a whipping. Feeling responsible, the sister buys a book on boxing and teaches him how to fight.

A larger plot concerns a girl named Patsy Gallagher (Joan Carroll). Patsy’s mother (Martha Sleeper) is the 1940s equivalent of a single mother in that she was married but her husband ran out on her. In trying to get her life together, she decides that Patsy is best served by going to St. Mary’s school and living at the school, which is arranged for her. Patsy, though, is an indifferent student at best, and when her mother seems to ignore her completely in favor of taking back up with her husband, Patsy’s schoolwork declines.

A third subplot concerns Sister Mary Benedict herself. She begins experiencing a series of fainting spells that have apparently gone on for some time. As it turns out, she has tuberculosis. When Father O’Malley works to get her sent off to a different parish for her health, she assumes that he is getting rid of her because of a variety of personality clashes, particularly over the aforementioned Patsy.

I need to talk about that clash, because it’s the moment that killed this film for me completely. Patsy is an 8th grade student, which means that she is set to graduate from the school at the end of the year. However, since she is of the belief that her mother is abandoning her, she completely bombs her finals and fails all of her classes. O’Malley’s take on this is that the sisters should pass her anyway and kick her on to the next school. Why? So her feelings don’t get hurt just when she’s starting to feel good about herself. This is not the fudging of a single grade by a percentage point to graduate the kid—Sister Mary Benedict comments that passing for the school is a 75% and Patsy’s grades are below 60% in all of her classes. But let’s move her on? As a teacher, this is the sort of thing that makes me want to reach into the film and slap Bing Crosby across the puss. He even comments that she got the date on the paper right and spelled her name correctly, so that should be worth passing her. Seriously, that pisses me off.

My biggest issue here is that this lacks the warmth and the heart of Going My Way. There, when the church needed funds, Father O’Malley writes a song that he attempts to sell to give the proceeds to the church. As it happens, everything works out, but slightly unexpectedly. Even though things do work out in that Hollywood way, there’s never a moment in that film that feels like a cheat. The Bells of St. Mary’s feels like a cheat in every happy ending it manages to pull off.

You know going in that the nuns are going to get Bogardus’s building; that’s hardly a spoiler. But it happens in a way that defies logic and character, and is unsatisfying. This isn’t to mention that the doctor (Rhys Williams) who diagnoses Sister Mary Benedict insists that she not be told that she has a life-threatening illness—in fact demands that Father O’Malley simply send her to a dry climate without explanation. This is unconscionable, and the fact that it’s done simply to add a conflict to the plot is inexcusable.

And even when Sister Mary Benedict insists that Patsy won’t graduate, Patsy admits that she tanked her tests on purpose so that she can stay at the school another year and not go back to her mother, which means of course that she does graduate. And, of course, in another unfair Hollywood miracle, her parents get remarried. It’s diabetes-inducing.

All in all, this was a disappointment because I hoped it would hit the same area as Going My Way and it instead goes for sappy and maudlin and fails on all counts. Every ending is completely unfair, and for a movie that takes place in a religious school and has a priest for a main character, it’s an unforgivable sin.

EDIT: I forgot to mention this. Another thing The Bells of St. Mary's is missing when compared with Going My Way is any song that's worth anything. Going My Way gave us the still-memorable "Swinging on a Star," and that was a big part of the film's charm. The Bells of St. Mary's has nothing close. There are a couple of new songs here, but I couldn't recite a verse or a line of any of them. That's never a good thing when your star is the one singing them.

Why to watch The Bells of St. Mary’s: Bing Crosby reprises one of his classic roles.
Why not to watch: There isn’t a single plot resolution that isn’t a cheat.