And There Goes Me Caring About It 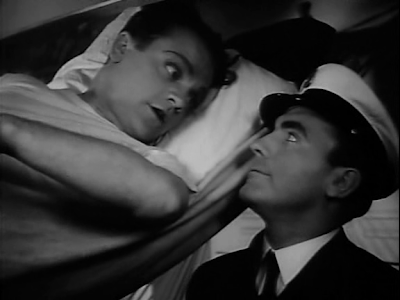 The idea of a cursed production has probably been around for about as long as there have been productions of any sort of drama or comedy. Here Comes the Navy from 1934 is odd in that it was evidently cursed retroactively. There are two major vehicles from the U.S. Navy used in this film. One of them, the dirigible Macon, crashed in the Pacific the year after this film was made. The other was the USS Arizona, which was sunk at Pearl Harbor and still exists there as a monument to the men who died in that raid. It puts a very weird spin on a movie that is, essentially, a comedy, an unintended darkness that happened because reality crept in.

I knew nothing about this film going into it except that it was nominated for Best Picture. Turns out that a minute or two in I discover that it stars James Cagney. That’s generally a positive in my book; I like Cagney. It’s unfortunate that his name in this film is Chesty O’Conner, “Chesty” being short for Chester. Chesty is working construction on the docks near where the USS Arizona when he has a run-in with Biff Martin (Pat O’Brien), who is stationed on the ship. That night, at a party for the dockworkers, Chesty and Biff duke it out, and Biff wins the fight with a cheap shot. Adding insult to injury, Biff walks off with Gladys (Dorothy Tree), Chesty’s girl. The ultimate insult is that Chesty loses his job. With nothing better to do, he enlists in the Navy, hoping to be assigned to the Arizona. Because this is Hollywood, he is, and because this is Hollywood, his pal from basic, Droopy Mullins (Frank McHugh), goes to the Arizona as well.

What follows is the sort of thing that can pretty easily be predicted once you know the basics. Chesty sees Biff Martin escorting a young woman around the ship and immediately makes a play for her. And, of course, the young woman is actually Biff’s sister (Gloria Stuart), which makes things complicated. Biff, after all, doesn’t want his sister hanging around with a mug like Chesty O’Conner, and he has the rank to prevent it. There are some wild antics, and eventually Chesty proves himself to be a solid sailor and everything ends happily. Hurray for the Navy.

The major problem with Here Comes the Navy is believability. Chesty O’Conner gets up to shit that wouldn’t get him court-martialed (which happens) but thrown in military jail. It’s easy for me to like Cagney as the sort of brash bastard he plays in this film because it’s what Cagney was really good at, but the overall plot of the film is just kind of stupid. It portrays the Navy as a place of wacky hijinks.

There’s also a fine bit of racism in the film, with African-American sailors depicted at times as hayseed-speaking uneducated comic characters, and Cagney does a scene around the middle of the film in blackface. I’ll chalk this up to the time the film was made. There’s enough here for me to question that it’s not really necessary for me to get into the idea that the film is racially backward. Hell, the United States was racially backward in 1934, and a lot of what Hollywood was doing was a reflection of the time. It’s so over the top here that, while not excused, it comes off as more an artifact than as something mean-spirited.

Anyway, Here Comes the Navy is pretty harmless in general (I’m even willing to ignore the really bad rear projection work), but it took me until close to the end of the film for me to figure out exactly what my problem was with it. It’s this: Cagney’s character is almost impossible to like. He’s pretty much a dick to everyone in this film, even the people who are trying to be nice to him. Cagney often played with a sizable chip on his shoulder, but here it’s completely unwarranted. He’s an asshole for the sake of being an asshole, and because of this, the ending seems completely unwarranted as well.

I’m also having a difficult time figuring out exactly what the point of the film is. It’s hardly a straight propaganda film, since we’re well between wars when this was made. It was made with the assistance of the Navy, so maybe they hoped for some good public relations from it—they get to show of the Macon and the Arizona, so I guess there’s that.

And it’s worth noting that based on what happened afterward makes the ultimate fate of the characters pretty dark, assuming they stayed in the service.

Why to watch Here Comes the Navy: Because James Cagney is James Cagney.
Why not to watch: Because it’s kind of stupid.