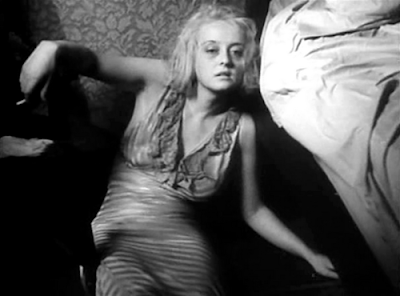 I’ve been married for close to 23 years, so I’d understand it someone dismissed any dating advice I might give. Because it has been a number of years since I’ve been in that part of the world, there’s only one dating rule I remember for heterosexual men. Pardon the crudity, but that rule is, “Never stick it in crazy,” and I can’t but imagine that there’s variations of this for women and for men of different proclivities than mine. I think it’s a rule to live by, although I’ll certainly let my wife give this particular bit of advice to my daughters when they need it. I bring this up because Of Human Bondage is a short film about a guy who spends the whole film attempting to, well, stick it in crazy.

Or course, since this is from 1934, it’s going to be pretty tame in a lot of respects. Timid Philip (Leslie Howard) is cursed with a club foot, which has made him something of an emotional pushover. After spending a few years in Paris attempting and failing to be a painter, he decides to return to London and pursue a medical degree. It is there that he meets Mildred (Bette Davis), a server at a local café. Mildred is regularly terrible to Philip, which does not dissuade him from chasing after her. Mildred is regularly scornful of him and always non-committal. His infatuation with her causes him to fail his examinations. When he proposes marriage to her, she essentially laughs in his face and runs off to marry one of her wealthy customers.

Get used to this, because it’s going to happen over and over again in a movie that runs a scant 83 minutes. Philip hooks up with a writer named Norah (Kay Johnson), who he dumps when Mildred comes back into his life, abandoned and pregnant. Once the baby is born, Mildred is unchanged, gives the baby to a nurse for care and immediately begins flirting with Philips friends, eventually running off with one of them (Reginald Denny). And of course she comes back a third time.

Of course, Philip takes her back again, and this time Mildred manages to begin sabotaging Philips relationship with Sally (Frances Dee), whose family has taken him in and given him a job while he returns to medical school. Not content to merely destroy Philips relationships, this time Mildred also manages to destroy most of Philip’s stuff, including his money. And so it goes, with each appearance of Mildred putting her closer and closer to the gutter and Philip continually unable to break away from the woman who seems pathologically obsessed with destroying his life at every opportunity.

The best thing about Of Human Bondage is the story that accompanies it. Bette Davis saw the script and believed it could be a breakout role for her, which it proved to be. When she started getting a lot of Oscar buzz, Warner Brothers studio head Jack Warner, who loaned Davis to the studio that made this, created a campaign against her, which prevented her nomination. Despite this, members of the Academy wrote her name in, which caused a number of changes in Oscar balloting in following years. That right there is a better story than the one we see on the screen, more’s the pity.

There are, like it or not, real problems with Of Human Bondage, not the least of which being Bette Davis herself. I love Bette Davis in general, and I love it when she plays bitchy characters, although Mildred isn’t a likable character in any respect. No, the biggest problem with Bette Davis’s performance, despite the fact that it made her a star, is that her accent is one of the worst I’ve come across in the last 12 months, ranking in the neighborhood of Dick Van Dyke’s in Mary Poppins. It is physically painful to listen to for any length of time.

More to the point, there’s not a single damn thing interesting or admirable about Philip. In fact, the only really interesting character is Sally’s father (Reginald Owen), who is far nicer to Philip than Philip deserves. I realize that there are people like this in the world, but that doesn’t mean they’re worth a movie. Bluntly, we can guess Philip going to end up with Sally by the end of the picture, particularly with the downhill road Mildred seems insistent on following, and Sally is too damn good for him.

It may well be that the intent here was to make Philip interesting because of his weakness. There are times when a person’s addictions are the subject of fascination and of excellent movies. But not here. Philip is then 1930s equivalent of, well, any destructive stereotype you’d like to name, but less understandable. I get why people become addicted to drugs, to gambling, to a lot of things. There are moments when, despite all of the problems, everything feels right. That never happens here—Philip never gets a moment of pleasure from Mildred at all, which makes his obsession with her not just hard to understand but completely unfathomable. This is 83 minutes of someone deliberately causing himself pain with the hope that maybe he’ll one day come to experience it as pleasure. It’s not interesting; it’s just ugly and frustrating.

Hey, I’m happy Bette Davis became a star. I just wish it had been a better movie. I give her the “wipe my mouth” rant at the end, but that’s all. I suppose if nothing else, this was good for a second dating rule: don’t stick it in evil, either.

Why to watch Of Human Bondage: It made Bette Davis a star.
Why not to watch: Your main character is a tower of quivering Jell-O.