Film: Bound for Glory
Format: DVD from NetFlix on laptop. 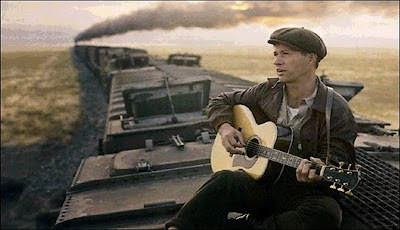 When you think of innovation in film, particularly technical innovations, movies like The Matrix spring to mind. The 1976 biopic Bound for Glory about the life of Woody Guthrie isn’t necessarily one that comes trippingly off the tongue. Be that as it man, Bound for Glory is the first film to use a steadicam. So, like it or not, this is a film that changed the way films are made, and it’s no mistake that it won an Oscar for cinematography.

It’s also an interesting film for its star, David Carradine, who hadn’t had any parts of note outside of Kung Fu and Death Race 2000 before this film. I’m guessing it would have been extremely easy to write off Carradine as someone incapable of a serious film in 1976. And yet here he is, playing Woody Guthrie and doing a far more than serviceable job of it.

Bound for Glory is evidently a highly fictionalized account of the early years and beginning musical career of Guthrie, despite being evidently based on Guthrie’s autobiography of the same name. Since I’ve never read the book, I don’t know if this means that the movie has little to do with the book or if the book itself is mostly fictionalized. I’m also not sure it matters in any case. While the specific moments that happen in the film are perhaps not real events, there’s a deeper truth here about the Dust Bowl and the migrant workers who flooded into California.

This is yet another in the long list of episodic films I seem to be coming across these days. There’s not a great deal of plot here for quite a while, or really ever. It’s more or less the life and times of Woody Guthrie as he leaves his family looking for work, heading out to California, riding the rails and dealing with problems. It was, of course, a terrible time in American history, with thousands starving and unable to find work, and few places were hit like Oklahoma and Texas and surrounding areas. Unable to get work as a sign painter or as a fiddle player for hoedowns, Guthrie eventually pulls up stakes, leaving his wife and kids behind to find work in California. What he finds, in addition to vicious railroad bulls, is no work and camps filled with migrant workers desperate for any work they can get, even at the criminal wages offered by the orchard owners.

It’s not until the film is about halfway over that anything at all different happens. One day in the migrant camp, a man named Ozark Bule (Ronny Cox) shows up. Bule is a traveling performer who brings something like joy into the lives of the migrants and also attempts to get the workers to organize into a union despite their desperation. Eventually, a fight breaks out over Bule’s presence in the migrant camp. Guthrie ends up leaving with Bule, which leads to Guthrie playing music for a man who gives him a job on the radio. From this moment, the film becomes more and more about Guthrie’s music and the beginnings of folk music.

This leads to several important developments. First is that it leads to folk music being sort of a thing—Guthrie was incredibly prolific as a songwriter and became in many ways the voice of America. It also leads to Guthrie becoming more and more politically motivated and assisting Bule in his quest to unionize the migrant workers. As his music career starts to blossom, he refuses to give up his new political, almost socialist views, using his growing fame as a platform to take the plight of the migrants to the American people.

Ultimately, the film is a character study of Guthrie and the strange paradoxes that made him work. He was continually worried about the welfare of others, but never that of himself. He seemed dedicated to doing what he did for his wife (Melinda Dillon) and kids, but is content to walk away from any job if he’s not able to speak his mind. He also appears to truly love his wife and kids, but has no concept of fidelity in his marriage. Essentially, Guthrie comes across as a man who knows precisely what he wants and will take nothing else.

A good part of the film is Guthrie’s music. If you can’t handle a pretty steady diet of old school folk music, this is going to be a rough ride. I don’t mind it that much, so I didn’t have a real problem. And like his music or not, it’s hard to ignore the fact that Guthrie was a hell of a good songwriter, and one of the most important American voices of the last century. If for no other reason, Bound for Glory is important for keeping Guthrie’s voice alive.

Incidentally, if you don’t understand the post title, do a Google search and check out what you find. Check out the words if nothing else.

Why to watch Bound for Glory: A truly American story.
Why not to watch: It takes a long time to get to anything like a plot.