The Devil Went Up to New Hampshire 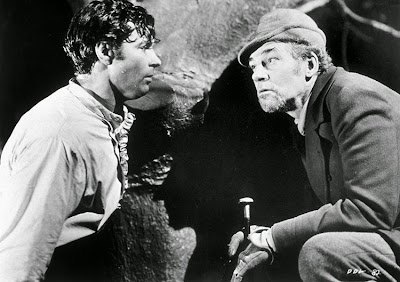 I don’t always understand the Academy. I understand exactly why Walter Huston was nominated for an acting award for The Devil and Daniel Webster. I’m just not sure why it was for Best Actor and not Best Supporting Actor. Huston is the heart and soul of this film without a doubt. He, and the music are the best reasons to spend your time with what would otherwise be a pretty trite morality play.

To get a grip on the story, take two parts Faust, one part A Christmas Carol, mix well, and cook at 350 for about 106 minutes. Seriously, this is about as close to high concept as you can get. A farmer who is experiencing a series of trials sells his soul to the devil for seven years of worldly success. At the end of those seven years, he begs American political legend Daniel Webster to come and argue his case and save his skin. That’s pretty much it.

A little more detail is probably worthwhile. Farmer Jabez Stone (James Craig) is a typical salt-of-the-earth farmer on a losing streak. He owes money to the local banker/miser/loanshark Miser Stevens (John Qualen), and everything on his farm is going wrong. His pig has broken a leg, he spills a back of seed needed to help pay off his debt, and his wife Mary (Anne Shirley) has taken a hard fall off his wagon. Knowing his is responsible for his farm, his wife, and his mother (Jane Darwell), Jabez utters a curse that is more or less an incantation to summon the devil. And summoned he is. With a crack of thunder, Mr. Scratch (Walter Huston) appears.

Unsure of what to do, Jabez is tempted with the sudden appearance of a cache of missing Hessian gold that appears under his barn. With this, he is able to pay off Miser Stevens and even start loaning money to other farmers. Right about this time, Daniel Webster (Edward Arnold) is appearing in the neighborhood. Webster happens to know Mary from her childhood. Webster is also a resolute fighter for the farmers and plans some legislation to keep the farmers working despite usurious loans, a plan that Jabez initially supports and then, once rich, rejects.

Over time, Jabez becomes incredibly wealthy and all of the breaks go his way. A hailstorm destroys crops on all of the surrounding farms but miraculously (or, perhaps diabolically), his are unharmed, allowing him to hire other farmers to do his harvesting for him. Mary has a child, named Daniel (eventually played by Lindy Wade), who becomes a snotty, spoiled child. The money Jabez loans to other farmers soon puts him in the position of being the new town loanshark, and everyone suffers. And then, of course, the seven years have run their course and Mr. Scratch comes to claim Jabez’s soul.

I said at the top that Walter Huston and the music are the only reasons to really spend time with The Devil and Daniel Webster, but that’s not entirely true. Just as Jabez’s and Mary’s son is born, Mr. Scratch decides to send one of his assistants to watch over Jabez for the next few years. The servant he sends is Belle (Simone Simon). Belle is one of the great characters of this film, and it is specifically because of how Simone Simon plays her. Belle is a combination of sexy, creepy, and seductive evil. She’s fantastic, and a touch of the exotic in a film that really needs it.

Another benefit is the way in which it was filmed. There are several scenes, particularly Jabez Stone’s party to celebrate his new house, that are tremendously creepy, bordering on horror movie of the era. In fact, the ghostly people who show up at Belle’s request and begin dancing look like something directly out of Carnival of Souls. Of course, since this film predates that one by a good two decades, it’s evident that Carnival of Souls is borrowing pretty liberally, and with good reason. The scene is fantastic.

But this really is Walter Huston’s film. It’s so evident that he’s having a ball with this. He plays the role pitch-perfect. Mr. Scratch is confident, conniving, and just a touch evil on the surface while seeming completely reasonable. He’s not overly wicked or overtly cruel; he’s businesslike and happy to speak with anyone and everyone. On the other hand, James Craig as our beleaguered hero is generally a blowhard and a jerk. Edward Arnold as Daniel Webster is a drunk blowhard. And Anne Shirley is just kind of a sap.

The biggest issue I had is that the whole film builds up to the trial at the end, and the trial is something of a disappointment. Mr. Scratch causes a jury of dead Americans to show up to try Jabez, and brings in a laundry list of criminals, thugs, and traitors headed by Benedict Arnold. But the trial itself is too quick. Rather than a back and forth of legal expertise, only Jabez takes the stand, and he answers only one question. Webster can’t even cross-examine him. Instead, we just get a speech about ‘Murica and freedom.

Disappointments like this prevent me from ultimately loving The Devil and Daniel Webster, but the performance of Walter Huston, and to a lesser (but still significant) extent Simone Simon make it worth your time. Seriously, watch it for him.

Why to watch The Devil and Daniel Webster: Walter Huston makes a perfect Satan.
Why not to watch: Both of your heroes are kinda douchey.

Email ThisBlogThis!Share to TwitterShare to FacebookShare to Pinterest
Labels: All that Money Can Buy, comedy, drama, fantasy, The Devil and Daniel Webster, William Dieterle