Be Careful What You Wish For

Film: Room at the Top
Format: Streaming video from Hulu+ on laptop. 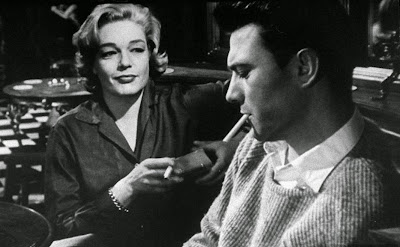 Say the word “romance” in the context of a movie and certain things immediately come to mind, don’t they? What you don’t expect is something harsh and brutal and aimed specifically at depressing the audience. I had this exact experience when I watched A Place in the Sun, which has the downbeat ending to end all. Room at the Top heads in the same direction. It doesn’t go all the way there, but it comes pretty close.

Joe Lampton (Laurence Harvey) has arrived in the town of Warnley as a result of getting a new job in the local government office. The job is solid and safe, but low paying. Joe meets up with coworker Charles Soames (Donald Houston) to help get settled into his new town. Joe comments that what he really wants is one of the big houses up on the hill. He wants everything that comes with it as well, and sets about with a will to get it. The target of that is young Susan Brown (Heather Sears), the daughter of one of the local wealthy industrialists. To get to know her bette,r Joe becomes a member of the local thespians, since Susan likes to act a bit as well.

While acting, Joe meets Alice Aisgill (Simone Signoret), who is French and exotic, married, and about 10 years his senior. It’s quickly evident that Alice’s marriage is an unpleasant one and an unhappy one. When Susan’s parents send her off to a vacation on the continent to keep her away from the influence of Joe, he begins an affair with Alice.

It’s evident that this affair means much more to Alice than it does to Joe, but he is happy enough with her, and would like to marry her. Unfortunately for him, Alice’s husband (Allan Cuthbertson) refuses to let her go. George Aisgill is almost a stereotype. He’s cruel and vindictive and suspected of a great number of affairs of his own. However, he’s been careful enough not to ever be caught or even leave a trial while Alice and Joe have not been nearly that careful. Worse for Joe, it turns out that he has managed to get Susan pregnant, which will get him everything he wants, except it will require leaving Alice behind.

Room at the Top is nearly flawless in the story department. This is a film that goes directly for the jugular of the audience as well as its characters, giving most of them precisely what they want in the same way a genie or the monkey’s paw does—by granting that wish in the most twisted and unpleasant way possible. Once Joe sets his sights on what he wants, he slowly and inexorably moves closer and closer to that goal and becomes more and more unhappy. For as brutal as this is, it all hang together perfectly and all makes logical sense.

Performance-wise, Laurence Harvey is excellent in the role. There’s a heartless quality to him that is completely believable—it’s the same quality he displays in The Manchurian Candidate. Simone Signoret won the Oscar for this role, and at this moment, it’s hard to say that it was an undeserved nomination at the very least. She is the epitome of a tragic woman, unhappy and unable to trust any happiness she receives because she is certain that it will go away as soon as she claims it.

If there’s a weak point in the cast, it’s Heather Sears, and it may simply be the role that she has been asked to play. Susan is naïve and ineffectual throughout the film, and of everyone, is the only character who really gets everything she wants by the end, and does so strictly because of her naivety. She is more a means to an end than an actual person for most of the film, but that’s the role itself. It’s evident that Joe gets tired of Susan pretty quickly, and I can’t say that I blame him. I just don’t know if that’s Susan Brown who is responsible or Heather Sears playing Susan Brown.

The real complaint here is that this film was so difficult for me to find. NetFlix inexplicably doesn’t have it, nor did any of the libraries I use or the library through which I can request interlibrary loan. This film isn’t that terribly old and it won two Oscars—both Signoret won and the script did for adapted screenplay (and it’s another place where I’d be hard-pressed to suggest it didn’t earn the nomination). So why did I have to jump through hoops to locate it?

Why to watch Room at the Top: The resolution is as harsh as it comes.
Why not to watch: It’s kind of a bitch to find.