Film: How to Train Your Dragon 2
Format: Streaming video from NetFlix on The Nook. 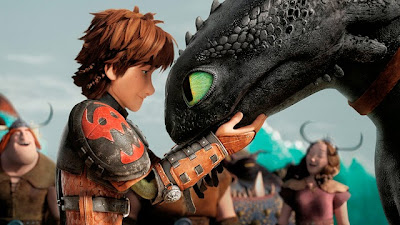 I won’t pretend like I wasn’t interested in watching How to Train Your Dragon 2. I was curious as to where the story would go after the first film. It had a good, solid base to build on; the first film is smart, funny, and had a great sense of adventure. It is one of those great kid-oriented films that manages to be just as entertaining for adults and for the same reasons. Additionally, the original film does a few things differently from the typical animated kids’ film and does those things really well. The question, then, is if the sequel holds up.

We’re back to the village of Berk, which has become a haven for dragons in the five years that have passed since the first film. Hiccup (Jay Baruchel), the savior of the town in the first film is essentially running away from his duties as chief-designate by his father, Stoick the Vast (Gerard Butler). Stoick wants to turn the reins of power over to Hiccup, who doesn’t want them. And again, in a piece of smart writing, this isn’t an irresponsibility thing or a function of Hiccup’s constant exploring of new lands. It’s that he doesn’t think he has the qualities his father does as a leader and that he won’t be able to handle the job the way his father does.

Astrid (America Ferrara), Hiccup’s not-quite-fiancée finds him out wandering and the two fly off to a new area where they discover a gang of dragon trappers led by Eret (Kit Harington) catching dragons for a man named Drago Bludvist (Djimon Hounsou). Hiccup and Astrid return home to alert everyone, and Stoick begins to panic. He’s had dealings with Drago before and knows the man to be a remorseless killer. Hiccup, not wanting a war and convinced he can stop it, goes off in search of Drago and finds instead his long lost mother, missing for the last 20 years of his life.

Valka (Cate Blanchett) was lost in a dragon raid when Hiccup was a baby, but instead of being killed, she was taken in by the dragons and has become something of a protector to them. She also fights against dragon trapping as best she can. The family reunion is short-lived, though, as Drago is soon on the march, leading his massive army of dragons to crush Berk and then to bring the rest of the world to its knees.

As with the first film, How to Train Your Dragon 2 gets pretty much everything right. The characters are still fun and still given real personalities. Sure, some of these personalities are extreme and done for comic relief, but our main characters think and act like real people. They are forced into difficult positions and decisions multiple times, and they behave in realistic ways when this happens. It’s a film that, while made for kids, doesn’t talk down to them. It gives them real characters and a real story. I also like that Astrid has grown up from the first film. She’s still competitive and aggressive, but she’s much less a stereotypical “girl power” character in this film, and that’s a genuine improvement.

It also contains a number of good comedy moments. Hiccup’s peers, Snotlout (Jonah Hill), Fishlegs (Christopher Mintz-Plasse), and the twins Tuffnut (T.J. Miller) and Ruffnut (Kristen Wiig) aren’t used a lot, but are frequently funny, with the new added twist that both Snotlout and Fishlegs are obsessed with Ruffnut, who hates them both. (She gets a taste of her own medicine when she gets her first look at Eret.) Of the other characters, Berk’s second-in-command and mechanical “genius” Gobber (Craig Ferguson) is an extreme comic character, but he also happens to be one that is genuinely funny most of the time.

Once again, as with the first film, we’ve got writers who are smart enough to have real danger and real problems for the characters. Their lives are frequently on the line throughout the film, and there are again moments that are surprising because of this. How to Train Your Dragon 2 doesn’t pull its punches despite its target audience, another indication that the filmmakers respect kids as smart film viewers. It’s also another reason to respect this film and, so far, this franchise.

It also doesn’t hurt that this is a very pretty film. The art is beautiful and the animation is superb. I also love the fact that the characters have aged. Everyone is still recognizable from the first film, but there is no question that Hiccup is older. He looks about 20. He’s taller and more filled out physically. It was a good decision because despite the physical changes in the characters, it actually lends continuity to the two stories. In terms of consistency, Hiccup’s dragon Toothless is still screamingly cute and dog-like, and arguably the best character in the film.

Is there a downside? Well, I still don’t know why all of the adults sound like they are from Glasgow and all of the younger generation sounds like they’re from Des Moines. Beyond that, because this is much more an adventure film than the first one, it’s also lesser in terms of the characterization. The first film was about Hiccup and Toothless, while the sequel is about saving the village. As good as this story is, I like the first one a little better.

Then again, I like the first film a lot, so that’s not much of a criticism. If you liked the first How to Train Your Dragon, you’ll find almost as much to love with the sequel. If you didn’t like the first film, you’ve obviously got something wrong with you.

Why to watch How to Train Your Dragon 2: It builds very well on the first film.
Why not to watch: It’s not quite as good as the first one (but it’s close).