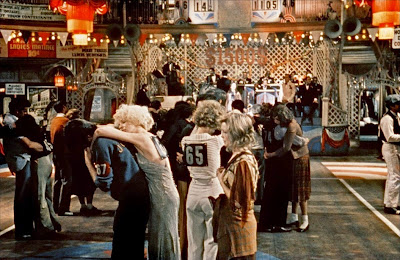 I’ve been looking forward to rewatching They Shoot Horses, Don’t They? for some time. This is one of my favorite movies of the 1960s and, for my money, contains one of the single greatest cinematic moments of its decade. I liked this movie a lot going into it, and I like it just as much now that I’ve watched it again. They Shoot Horses, Don’t They? holds the record for the most Oscar nominations (9) without being nominated for Best Picture. It won’t be a shock by the end of this review that I think that was a miss and it should’ve been in contention for that award.

They Shoot Horses, Don’t They? concerns a dance marathon set during the Great Depression. The idea of a dance marathon is simple: take a bunch of couples and make them dance until there’s only one couple left. For this particular competition, the couples must be in constant motion with both knees off the ground constantly, except for ten minutes every two hours. It’s not long before all of our competitors are in such a state of physical, mental, and emotional exhaustion that they are capable of anything, particularly as the crowd who comes to watch them grows as the competition goes on.

Running the competition is Rocky (Gig Young, who won for Best Supporting Actor), a showman who has created the contest as a way to make himself money, or at least to give himself a way to eat while the couples are dancing. He’s assisted by Turkey (Al Lewis), who doesn’t talk much but is always in the background. As the marathon starts, we are introduced to Gloria Beatty (Jane Fonda), whose partner is disqualified immediately because he is sick, possibly with bronchitis. She hooks up with Robert Syverton (Michael Sarrazin), who happened to be walking past and wasn’t particularly interested in participating. Gloria is hard-bitten and angry, always assuming the worst of everything and everyone because she’s always gotten the worst of everything. Robert is much more naïve, but loses that naivety as the competition goes on.

Among the others in the competition are Harry Kline (Red Buttons), a former sailor who is really too old to participate but desperate enough to do so. Another couple is James (Bruce Dern) and Ruby (Bonnie Bedilia), a married couple expecting their first child, as Ruby is obviously pregnant and far along in her pregnancy. The other significant participants are Alice (Susannah York, nominated for Best Supporting Actress) and Joel (Robert Fields), aspiring actors who are participating for a chance to be discovered.

Some of what happens is the personal interplay between the people trying to win the $1,500 cash prize for being the last couple standing. Tempers are naturally short and nerves are always on edge. Alice loses a dress and her make-up, which is a plot point for a good portion of the film until it’s revealed exactly what happened to her spare dress and why it has happened. Much of what happens is pure manipulation on the part of Rocky and the other organizers, preying on the weaknesses of the participants in order to put on a better show for the paying customers. And these people are truly desperate. By the time the film wraps up, we’re well past 1,000 hours of the competition, which equates to more than 41 days of continual dancing.

There are few movies I can think of that depict human desperation with the same sort of power as this one. At several points in the film, the dancers are forced to participate in a derby. Essentially, the dancers are forced to run around a track painted around the dance floor as many times as they can in 10 minutes, with the three couples coming in last being eliminated. This is a horrifying but fascinating thing to watch, seeing people who are tired beyond anything imaginable struggling for the chance to stay in this horrible competition just a little longer for the chance at the money, or just another meal.

I don’t generally have a strong opinion on Jane Fonda, but I do have a very strong opinion of her in They Shoot Horses, Don’t They? I think it’s the best thing she’s ever done, and while she’s had some good performances in other films, I don’t think there’s anything else that she’s done that is in the same ballpark. Gloria is the most defiantly defeated character I have ever seen in any medium. Gloria is the perfect pessimist who continues to struggle not for anything better but just to shove it in the face of everyone else. She’s impossible to like, but equally impossible not to find completely compelling throughout. It’s life that’s turned her into what she is—the Great Depression didn’t destroy the life she had; it’s always been her life.

I like Michael Sarrazin in this a lot, too. He’d be worth a look for a nomination as well, although he’s not nearly as compelling as Jane Fonda’s performance.

There is a moment near the end of the film where Gloria discovers just how much of a scam the entire contest is. The look on her face as she realizes just how much she’s been had is one of the most perfectly realized moments in film in the 1960s and for my money, the best single moment of her entire career.

They Shoot Horses, Don’t They? is not a happy movie, but like the people in the audience watching the dance marathon, it is incredibly compelling. If you haven’t seen it, seek it out, because it is truly a cinematic experience that must be had.

Why to watch They Shoot Horses, Don’t They?: Human misery on a scale both grand and tawdry.
Why not to watch: There’s no happy ending here.