Film: Body and Soul
Format: DVD from NetFlix on laptop. 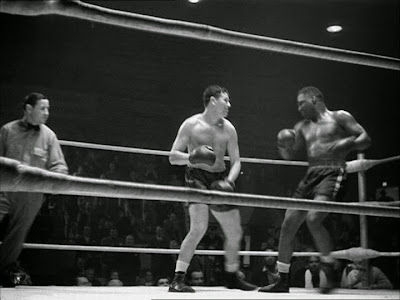 The movies have always had a love affair with sports because sports are guaranteed drama. Stick a group of people against another group of people vying for the same thing and the script writes itself. It’s the same reason that the movies are obsessed with romance and war. There’s no single sport that better exemplifies this than boxing, which is why Oscar loves boxing movies. Rocky, Raging Bull, Million Dollar Baby…the list goes on. That obsession seems to have started with Body and Soul from 1947. In addition to being a good old sports drama, this is a film that dips into film noir and one that is crawling with metaphor like any good sports drama should.

Before we get started, let’s get this off the top: Body and Soul is going to go exactly where you think it’s going to go. Plenty of movies have followed the path outlined by Body and Soul, and not a small number of those involve a palooka who wants to be the champ. You know there will come a point where he probably is the champ. You know there will come a time when he realizes that his friends are just there for his money, a realization that will probably come after a raucous party. You know he’s going to be asked to throw a fight at some point, and the third act will undoubtedly come down to whether or not he decides to throw it and give up his soul or reclaim his soul in the end. This is exactly where we’re going here, but Body and Soul went there first in a lot of ways. It’s important to remember that.

Charlie Davis (John Garfield) is a boxer over the objections of his parents, who run a little candy store in a rough part of New York. Charlie is an amateur champion and in celebrating this, he’s introduced to Peg Born (Lilli Palmer), an art student who moonlights as a girl who goes to such parties for men to ogle at. The two hit it off and become an item. Meanwhile, Charlie’s career is starting to take off thanks to his manager, Shorty (Joseph Pevney), who gets him hooked up with Quinn (William Conrad well before he assumed his eventual planetary mass).

But Charlie is reluctant at first. He’s got Peg and no job, though, and when the family candy store is caught up in a bombing of the next door speakeasy, Charlie feels like he has no option but to fight. And so he does, eventually getting himself a shot at the title against champion Ben Chaplin (Canada Lee). This means signing on with Roberts (Lloyd Gough), who is so obviously a criminal that it’s not even funny. Roberts gets 50%, Quinn gets a piece of both halves, and suddenly Shorty is being paid specifically out of Charlie’s winnings. But it’s a shot at the title and it’s what Charlie wants, even as Shorty warns him that he’s selling himself away for the prize money.

What Charlie doesn’t know is that Ben has a blood clot on his brain and that a real fight could well be fatal for him. But, desperate for money from Roberts, Ben agrees to the fight, provided that it’s an easy, 15-round decision. But no one tells Charlie this, and Charlie goes after the champ with a vengeance, knocking him out and putting him in the hospital.

What happens next is exactly what you think is going to happen. Charlie’s mom Anna (Anne Revere) objects to the turn Charlie’s life is taking, as do Peg and Shorty. But all Charlie can see is dollar signs, and so he pushes ahead, knowing that Roberts is a crook but enjoying the high life far too much. Eventually, Peg drops out of Charlie’s life, knowing that she can’t watch him throw his soul away, which leads Charlie to Alice (Hazel Brooks), an obvious gold digger who makes no bones about how much she’s in it for the cash and the mink. And, of course Charlie is eventually asked to throw a fight to make way for a new champ and is promised a golden parachute made by bets placed against him.

So Body and Soul is obvious about where it’s going, and like most sport movies, it’s fairly obvious as to where it is going even if you're unfamiliar with sports movies. We know how the last fight is probably going to go, and we’re not surprised when we get there. In fact, we know all of the emotional beats before they happen throughout. The fates of Shorty and Ben (eventually brought on as a trainer due to Charlie’s guilt) are plotted out before the first reel is done unspooling. And it really doesn’t matter, again, provided that the audience remembers that many of these clichés started here even if they feel old and tired now.

There is a reason that boxing is used so often in films like this one. It’s a natural metaphor—two guys going against each other with only their own strength and determination to settle the fight. Feel free to supply your own meaning.

The star here, naturally, is John Garfield, who I like more and more every time I see him. Garfield’s best and most defining quality is that he looks like a palooka. He looks like someone about as subtle as a headbutt, but he had real skills in front of the camera. Garfield sells this role completely. We know that Charlie is no genius but he’s not dumb, either. He wants what he wants, but he’s not evil or stupid. At his heart, he’s a good guy, and Garfield makes it easy to root for him, even when he’s acting like a shit.

It’s good to know where this plot has its roots. A lot of films follow the same basic story, and that’s because Body and Soul is worth copying.

Why to watch Body and Soul: The beginning of Oscar’s love affair with boxing.
Why not to watch: The clichés started here and it’s easy to forget that.