Film: Sleepless in Seattle
Format: Streaming video from NetFlix on The Nook. 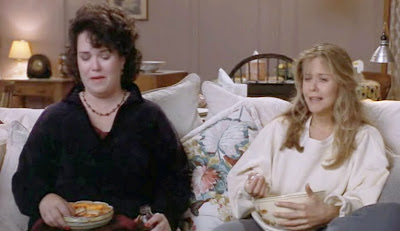 Off the top of my head, I can think of three movies that Tom Hanks and Meg Ryan made together: the terrible Joe Vs. the Volcano, the derivative You’ve Got Mail, and today’s viewing, Sleepless in Seattle. It wouldn’t be saying much to say that this is the best of the three. Sleepless in Seattle follows a lot of the romantic movie conventions as well as makes a good deal of hay with referencing An Affair to Remember. But it was also co-written by Nora Ephron and directed by her as well, which gives it immediate credibility.

It’s also a hard movie to classify. IMDB calls this a “comedy, drama, romance” and I agree only with two of those labels. Certainly there are comedy moments here, but this is not a film I would specifically label as a comedy. It’s heavy on the drama, heavy on the romance, and as with a lot of Ephron’s best work, the comedy comes naturally from the situations and from the characters, and never feels forced.

As the film starts, we are introduced to Sam Baldwin (Tom Hanks) and his young son Jonah (Ross Malinger). Sam’s wife has just died, presumably from cancer. Naturally depressed and seeing nothing but reminders of his wife everywhere around him, Sam decides that the best possible plan of action is to move from Chicago out to Seattle. The complete change of scenery may help him overcome the death of his wife. But, nearly a year and a half later, there’s no real change evident in Sam’s world and Jonah is starting to get worried.

Meanwhile, in Baltimore, magazine writer Annie Reed (Meg Ryan) has gotten engaged to Walter (Bill Pullman), who seems like a perfect match for her. Despite this, Annie has some reservations about the relationship and despite claiming that she does not believe in omens and portents, starts seeing everything as a sign. Driving home from a Christmas party, she is flipping through radio stations when she comes across one of those late night call-in shows. And who should be calling but Jonah Baldwin, telling the on-air shrink that he’s worried about his father. Eventually, Sam gets on the phone as well and spends the rest of the show discussing his love for his late wife. This creates an outpouring of sympathy and also encourages hundreds of women to inquire after Sam. Included in this group is, of course, Annie Reed. Her editor Becky (Rosie O’Donnell) encourages Annie’s growing obsession with the lonely insomniac on the coast, dubbed “Sleepless in Seattle” by the talk show.

And so, we’re going to get the sort of events that happen in both romances and romantic comedies. Jonah reads the letter that Annie writes to Sam (but that Becky ends up sending) and replies, agreeing to meet her on the observation deck of the Empire State Building on Valentine’s Day, a la An Affair to Remember. Sam, meanwhile, has begun a relationship with Victoria (Barbara Garrick) over Jonah’s objections, since he really wants his dad to hook up with Annie. And Annie, of course, has to deal with the problem of Walter, who is nice and decent, but also riddled with allergies and ultimately pretty bland.

We know where we’re trying to get with this, of course, and the film is smart enough to get us just to there without taking us any further. We’re essentially left to imagine the rest of it in our heads, which can open up some very interesting possibilities.

It’s the screenplay that was nominated here, and the screenplay really is the best part of the film. This is a smart film as opposed to being a clever one. What I mean by that is it isn’t the sort of film that gives you a snide smile and makes you consider just how smart the screenwriters are. Instead, it’s a film that treats its characters like relatively intelligent human beings who have emotions and problems and foibles and needs. None of the characters here are dumb, but neither are they perfect. They’re human and, aside from their physical attractiveness, very average in a lot of ways.

There’s nothing particularly exceptional about any of the performances. They’re good, solid, respectable, but not a lot more. That’s honestly probably a good thing. An over-the-top performance here would be too much and would overwhelm the rest of the film. The joy of Sleepless in Seattle is partly the characters but mostly the just-on-the-edge-of-believability fantasy of the story. It’s the sort of thing that is just on the edge of possible, and exactly the sort of thing we want to believe could really happen. For that, it’s worth a watch.

My only real beef here is the amount of stress that is put on omens, signs, and portents. Everything that happens is a sign of something greater. When Annie tries on a family heirloom wedding dress, the sleeve rips: it’s a sign she shouldn’t marry Walter. When someone says a line from An Affair to Remember, it’s a sign. Everything is a damn sign. The movie would work without all of this useless mythologizing of what is ultimately a long-distance fantasy romance between a woman and a kid who wants her for his mother.

And, it’s the best of the Meg Ryan/Tom Hanks movies, and it’s worth it for that, too. But it’s nowhere near the best of either of them. Most of the time, I was really just wishing that I was watching When Harry Met Sally instead.

Why to watch Sleepless in Seattle: It’s as close to romantic fantasy as you can get while still staying firmly grounded in the real world.
Why not to watch: You’ll probably wish you were watching When Harry Met Sally, too.