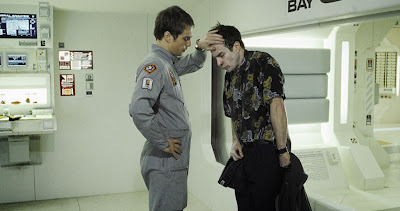 As much as I didn’t really like Avatar, I’m a little surprised it wasn’t nominated for Best Original Screenplay. It’s a rare moment when the Academy was smarter than I tend to give it credit for being. For as much fun as I had with Taken, I’m not surprised that it wasn’t nominated (and it really probably shouldn’t have been). Moon is one I would bring up, though, and (500) Days of Summer might warrant a look as well. Other than Zombieland, I’m tapped here—the other films I’d want to nominated are adapted.

5: I consider myself a Coen Brothers fan, but I really disliked A Serious Man intensely. There was nothing about this film that I found enjoyable, and a great deal of that comes from the script from whence it starts. I’d have much rather seen Moon on this list than this film, and I can only imagine that in a year that was otherwise fairly weak in the category led to this film being nominated. This was a bad nomination in my opinion.

4: From here on, we get films that I liked pretty well. There was a great deal to like with The Messenger, including a couple of great performances by Ben Foster and Woody Harrelson. The reason I’m putting it fourth is that there are some significant plot points of which very little is made. The Woody Harrelson character goes on a drinking binge that is supposed to be meaningful thanks to his membership in AA, but it’s really not. There could be a lot more made of what The Messenger wants to do, and that’s the fault of the screenplay, as is the very soft ending.

3: I’ve never been much of a Tarantino fan and Inglourious Basterds didn’t turn me into one. There’s a part of me that sighs at a lot of the man’s screenplays are so carefully designed to be “awesome” that they aren’t always that good. This one has much less of that than a lot of his other screenplays, which is why I’m putting it as high as third. There are some excellent points to this film and the screenplay helps, but there’s simply too much here of Tarantino pointing to how cool he is rather than just making a good screenplay that I’m not prepared to bump it any higher.

2: I like The Hurt Locker a lot, possibly more than it deserves. What it does so well is present something like a story about addiction but makes that addiction something completely understandable and in a certain mindset, noble. This is a very carefully crafted film because we get to such a potentially shocking and astonishing conclusion from what seem like such normal progression of events. I’m not terribly upset that The Hurt Locker won, but it still probably shouldn’t have.

1: The only reason I can think that Up didn’t win for Best Original Screenplay is that it’s an animated movie, and the Academy can’t bear the idea that the best original story produced in a given year was produced with an audience of children in mind. This is a brilliant piece of screenwriting, though, exemplified nowhere better than in the staggeringly beautiful and emotional opening of the film. That is filmmaking at its best and screenwriting at its best, and one of the most perfect film sequences of the last 100 years. We should be rewarding the best in film regardless of its source or style, and for 2009 in the original screenplay department, the best was Up.

Posted by SJHoneywell at 1:41 PM

Email ThisBlogThis!Share to TwitterShare to FacebookShare to Pinterest
Labels: 2009, A Serious Man, Best Original Screenplay, Inglourious Basterds, Oscar Got It Wrong, The Hurt Locker, The Messenger, Up