Blood is Thicker than Water

Film: You Can Count on Me
Format: DVD from DeKalb Public Library on laptop. 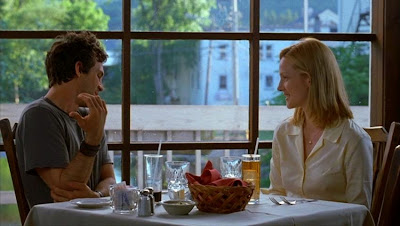 Every family has that one person who screws up constantly, and not in little ways. Think about it for a few moments; you’ve got a brother or a sister or a cousin who regularly makes really poor life choices over and over and eventually has the rest of the family bail him or her out. If that person is you, you might want to find a different review to read. If you are one of the responsibl people who makes good choices and can’t seem to get any help when you need it while the family fuck-up keeps getting chance after chance after chance, You Can Count on Me is a film you might want to watch.

Samantha “Sammy” Prescott (Laura Linney) has made the best life for herself that she can manage. Her parents are killed in a car accident when she is still young, a tough blow that she wasn’t prepared for. She made a poor choice in the father of her son Rudy (Rory Culkin), since he ran out on them. But she’s managed to secure a good job as a loan officer at the local bank where she frequently clashes with her new boss, Brian (Matthew Broderick).

It’s her brother Terry (Mark Ruffalo) who is the problem. Terry has never had a sense of direction in his life. He moves around from place to place working odd jobs, serving a little time because of a bar brawl, and otherwise doing very little of any importance. After months of not communicating with Sammy, he suddenly tells her that he’s coming for a visit. As it happens, his visit is planned for a single day and is centered around the fact that he desperately needs money. However, when his girlfriend tries to kill herself while he is gone, he decides to stay in town a little longer.

What follows is more or less an exploration of the relationship between Sammy and Terry. Terry slowly begins to bond with Rudy, but it’s an uphill struggle in large part because Terry takes out his frustrations with his sister on Rudy. Sammy, struggling with a boss who is driving her crazy and forced to trust Terry more than she wants to, starts to see some of her well-managed life coming apart at the seams. Her on-again/off-again boyfriend (Jon Tenney) proposes out of the blue, which starts her thinking. Not long after, she begins an affair with Brian, her boss, despite his having a wife who is six months pregnant. It’s almost as if Terry’s lifetime of bad decisions is starting to rub off on her.

You Can Count on Me is very much a slice of life, or rather a slice out of a life, and it manages to do this well. Like life, there are comic moments and tragic moments and moments that simply happen and don’t specifically make sense but feel real. It’s frustrating in that respect, but not in a bad way. Terry, for all his bad decisions and lack of responsibility, is completely believable. He’s not a bad guy at heart. He’s just unmotivated and kind of dumb. Sammy’s bad choices during the course of the film are equally understandable. They don’t come out of left field, and happen because she’s lost in her own way.

There’s a moment just past the middle of the film where Sammy sits down with Ron (Keneth Lonergan, who also wrote the screenplay and directed this), her minister, and essentially confesses everything that has happened to her lately, including her affair with Brian, who is also a member of the church. It’s actually a very nice moment, because Ron doesn’t give her a fire and brimstone speech but actually counsels her and talks to her like her problems are real rather dealing with some smokescreen of sin. He gets her to really think about why she makes the choices she does, and much of the rest of the film concerns Sammy coming to terms with her own choices and her own reasons behind those choices.

You Can Count on Me is also a smart film in how it ends. The ending we get is a real one. It’s not perhaps the most satisfying conclusion we could have gotten with a film like this, but it feels like something that makes sense. It’s an ending we can live with because it’s an ending that feels natural. That’s rare, and it’s great when it happens.

I’m not a huge Laura Linney fan. In truth, I don’t have a strong opinion on her one way or another. I suppose I liked her fine in The Truman Show despite her character being unlikeable. But here, she gives a very good and nuanced performance. This is a role that could have become broadly comic very quickly and could have just as easily dipped into movie of the week on Lifetime territory, but instead, she plays Sammy as a real woman with real concerns and with real reactions.

As for that person in your family who keeps making really bad decisions, the moral of this story may well be that you’ll never correct them out of that, and that sometimes, it’s okay. Sometimes you just need to let people be who they are and love them for who they are rather than the potential of what they could be.

Why to watch You Can Count on Me: It aims for reality and hits most of the bull’s-eye.
Why not to watch: It’s pretty low-key.

Email ThisBlogThis!Share to TwitterShare to FacebookShare to Pinterest
Labels: Best Actress, Best Original Screenplay, drama, Kenneth Lonergan, You Can Count on Me