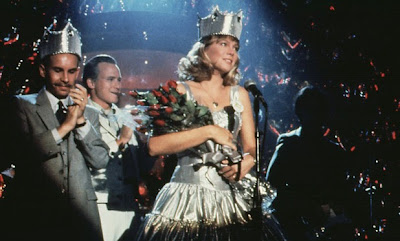 What do you get when you take almost everything fun from Back to the Future and replace it with Nicolas Cage sporting a pompadour? What do you get when you take the concept of time travelling back to the 1950s/1960s and replace the directorial style of Robert Zemeckis with that of Francis Ford Coppola? You get Peggy Sue Got Married, a film that feels like a retread 20 minutes in and not in any good way. The concept behind the film is sound enough but aside from a couple of points, the concept is pretty much all it has.

Peggy Sue Bodell (Kathleen Turner) is stuck in a life she doesn’t like on the night of her 25th high school reunion. She married her high school sweetheart Charlie Bodell (Nicolas Cage) who went on to own a discount electronics store complete with crazy late-night television ads. He also turned out to be a frequent adulterer, which is the main reason he and Peggy Sue are getting a divorce. Peggy Sue attends the reunion without him, running into old friends Carol (Catherine Hicks) and Maddie (Joan Allen) as well as others from her past including high school nerd turned inventor Richard (Barry Miller) and local dentist Walter Getz (Jim Carrey). For some reason, the reunion elects a king and queen—Richard and Peggy Sue in this case—and shortly after the crown is put on her head, Peggy Sue collapses on stage.

Before you can say “doodly-doodly-doop,” Peggy Sue wakes up back in 1960 having somehow traveled back in time to her senior year of high school and the time when she married Charlie. It takes her some time to realize what has happened, and even when she does figure it out, she still continually references her present, which is 25 years into everyone else’s future. This sudden return to high school allows Peggy Sue to fix some old regrets, like being nicer to Richard the nerd and hooking up with high school beatnik/poet Michael (Kevin J. O’Connor). And yet, almost irresistibly, Peggy Sue finds herself falling for Charlie all over again. Cue strings.

What I find really surprising here is how lauded this film seems to be. This thing has a high rating on Rotten Tomatoes and appeared on Siskel and Ebert’s best of 1986 list and swung a couple of nominations fro AFI’s various Top 100 lists. I don’t get it at all. Even the bulk of the good jokes are simply time references that are reminiscent in many ways of the far superior Back to the Future.

There are a couple of bright spots here. First is seeing Jim Carrey as a bit player doing a lot of the clowning that would make him eventually a bazillionaire. There’s also, very briefly at the beginning, a nice appearance from Marshall Crenshaw and his band as the band playing at the reunion. I like Marshall Crenshaw and I have pretty much since his debut album a few years before this film came out. Yeah, a lot of his music is corny, but it’s fun and infectious and references pop stars like Buddy Holly in a way that most people can’t. Interesting I suppose that I like this sort of reference to something earlier but was so disappointed with the film.

And then there’s Nic Cage’s hair. Cage sports a ridiculous blonde pompadour through the entire film, evidently keeping the same hairstyle in the film’s present as he did in the film’s main action in the past. It might be the first film with Cage rocking a completely stupid hairstyle, which makes it notable (for the record, this came out the year before Raising Arizona, so as ridiculous as his hair may have been there, this one was first).

But really, I’m pretty thoroughly disappointed in Peggy Sue Got Married. This could have been an interesting new take on the time travel idea, but it goes for retread instead of new ground. We don’t even learn how Peggy Sue goes back in time, but there are indications at the end that it really did happen and that everything she did differently in the past has made changes in the future. I can live with that if the film is good enough to support that sort of suspension of disbelief, but Peggy Sue Got Married isn’t good enough.

It’s also disappointing that this turned out to be such a nepotistic affair. In addition to sticking nephew Nic Cage in such a prominent role, Francis Ford Coppola cast daughter Sofia in the role of Peggy Sue’s sister Nancy. Sofia Coppola gets slagged for The Godfather Part III possibly without reason (if you know the full story), but she should get slagged for a pretty wooden performance here. She belongs behind the camera and this is simply more evidence of that.

I should probably say something about Kathleen Turner, who was Oscar nominated for her role as Peggy Sue. It’s not a bad performance, but I’m not prepared to call it a great or memorable one. She’s fine, but she’s better in Romancing the Stone and Body Heat. I wanted to like this and based on the critical acclaim, I expected to. I just didn’t.

Why to watch Peggy Sue Got Married: Nic Cage’s hair and Marshall Crenshaw.
Why not to watch: Back to the Future is funnier and more heartfelt.