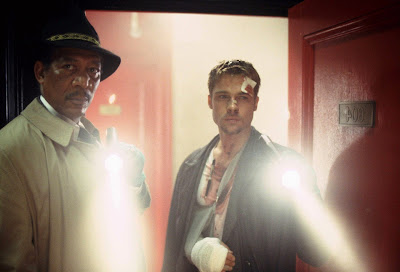 The Best Picture race for 1995 is an interesting mixed bag and there are plenty of films that I would love to see nominated that didn’t get within shouting distance of an actual nomination. From the more art school side, Underground would be an interesting selection. Casino is the one that I’m the most surprised didn’t grab a nomination. I’m also a little surprised by Toy Story being ignored, since by 1995 there was precedent for an animated film getting a nomination. I’d toss out Seven and The Usual Suspects as films that I think could be argued. Strange Days, Safe and Dead Man are films I like, but I also understand why they weren’t really in contention. Before someone suggests Dead Man Walking or Leaving Las Vegas…I haven’t seen those yet.

5: Babe is a cute movie and I like it quite a bit. But it doesn’t really belong on this list and I think pretty much everybody knows it. Even in terms of family films, it’s second best behind Toy Story at the very least. I like Babe more than at least one other film on this list as a matter of fact, but it really doesn’t seem like the sort of film that belongs in this competition. Could anyone really see this winning? It’s very nice that it was nominated, but this feels like a case where everybody gets an award and there were really only four actual nominees for 1995.

4: Braveheart is a film that I like less and less as time goes on. I was suitably impressed with it in 1995, but now, 20 years later, there’s a lot here that I don’t like that much. Patrick McGoohan and Sophie Marceau are the best parts of the film along with Brendan Gleeson, but none of them are the real focus of the film here. The incredible historical inaccuracy is another stumbling block. But I guess the real problem I end up having with Braveheart is that it more or less makes William Wallace the spiritual founding father of Mel Gibson’s ‘Merica. Is that harsh? Maybe, but I really don’t care.

3: With Il Postino, we’re at least getting to the place where I’d be willing to hear arguments for the nomination. Additionally, if the award were handed out for best story about the film’s creation, we’d have a winner. Massimo Troisi’s death less than 24 hours after filming wrapped is poetic. The problem is that I simply like too many other movies from 1995 a lot more than I like this one, despite how much I enjoyed this film. There’s a part of me that wonders how much I would be moved by it not knowing the story behind it, though. That’s not Il Postino’s fault, but it's still true.

2: No one was more surprised than I that Sense and Sensibility is a film that I enjoyed tremendously. I expected a drippy Merchant/Ivory production and instead got a film that is entertaining, fun, and contains genuine romance. And the cast is so damn good! There isn’t a single aspect of this film that I would change. Given my dream nomination list from this year, Sense and Sensibility would still likely nab a nomination, although it wouldn’t end up in second place. But it would still end up on the list, and in a year with this many movies I like, that’s saying something.

1: Seven is probably my favorite film from 1995, but I think Apollo 13 is the greatest film from this year. This is a film that hits on every cylinder and that promotes the best of science, technology, exploration, and pure out-and-out cojones. I admit that my opinion is colored by my love of outer space stuff and the NASA space program specifically, but this is a film that shows just how crazy ballsy the Apollo missions were and the sort of teamwork that any huge project really requires. Apollo 13 is a film that will continue to be studied for years. You want to feel good about America for a reason that isn’t manufactured? Watch this damn film.