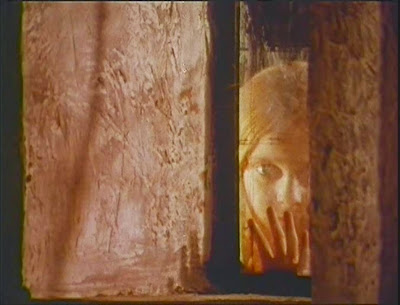 Over the past few years, I’ve come more and more to the conclusion that some of Italian horror is lost on me for the same reason that a lot of anime is lost on me. There’s a certain level of expectation with Italian horror that I’ll be able to fill in a lot of blanks on my own that are never filled in for me. I follow along as well as I can, and I’m generally impressed by the visual style of Italian horror, but the story often leaves me cold. That’s certainly the case with Kill, Baby…Kill!, which is another of those Italian imports that has about 100 names, including Curse of the Dead, Don’t Walk in the Park, and Curse of the Living Dead as well as its original Italian title, Operazione Paura, which translates as Operation Fear.

Kill, Baby…Kill! was directed by Mario Bava, who started his cinematic life as a cinematographer and continued to do all of his own cinematography except on a couple of films when he directed. It shows. This is certainly a pretty film and one that uses the camera well. Bava was always smart about where he put his camera and with what he shows the audience. Where he frequently seems to fall down (and Blood and Black Lace and Bay of Blood bear this out as well) is in the story department.

Travel back in time to around 1900 to a little Eastern European village in the Carpathians that appears to be under a curse. A coroner named Paul Eswai (Giacomo Rossi-Stuart) arrives to investigate the mysterious death of a young woman. He’s been called in by Inspector Kruger (Piero Lulli) because before she died, the girl sent a letter to the police claiming that the village was plagued with murders and that she believed that she would be the next victim. Her death, depicted at the beginning of the film, involves her falling onto a spiked fence—and the film lets us view the aftermath of this through the entirety of the lengthy opening credits. Gotta love Italian horror, right?

Anyway, the villagers attempt to bury the dead girl before Eswai can perform an autopsy on her. He and Kruger prevent the burial and Eswai finally gets his chance to examine the body, witnessed by former village resident and recent returnee Monica Schuftan (Erika Blanc). If you guess that Paul and Monica will soon be romantically attracted to each other, good guess. The big takeaway from the autopsy is that the body had a silver coin embedded in its heart. This is evidently a local superstition that suggests putting a coin in the heart of someone killed in a suspicious manner will prevent an angry ghost from rising.

There’s plenty of creepy things going on, most of which seem to stem from Villa Graps, the home of what would at one time have been local royalty. The villagers are terrified of the villa and refuse to go there. Baroness Graps (Giana Vivaldi) evidently prefers this situation, and dissuades visitors.

Over time, we get something more like a full story. The Baroness’s daughter Melissa was killed in an accident, and she has brought down a curse on the village. The only protection the villagers have is Ruth (Fabienne Dali), the local sorceress who is romantically linked to Karl (Luciano Catenacci), the town’s burgomeister. At odd moments Melissa appears, and her appearance tends to presage the death of someone, a death that generally includes some level of (I love this word) exsanguination. So, the scientific Paul Eswai has to eventually come to grips with the idea that he is actually encountering the supernatural in the form of an angry child’s ghost. Oh, and we eventually learn that Monica is actually the Baroness’s daughter as well, sent away to protect her from the curse.

What it comes down to is more or less what I said at the start here. Kill, Baby…Kill! is visually interesting but completely unsatisfying in the story department. Ruth’s power as a sorceress is never explained, nor is the relationship of many of the people to anything else. At one point, the daughter of a local innkeeper says something about the villa, and suddenly she is a target for attack by the supernatural. Why? Who the hell knows?

Kill, Baby…Kill! is a series of events loosely tied together and beautifully filmed. The real sell of a great deal of Italian horror is the gore, and this was made in an era before the gore became the focus of the films. There’s not a great deal here to look at in that respect, despite the beauty of the cinematography in general.

That makes this a difficult film to recommend in any respect. The story is overall weak and poorly conceived, and the gore just isn’t there. At least it’s short.

Why to watch Kill, Baby…Kill!: Bava made pretty movies.
Why not to watch: It’s not that good.