Film: The Signal
Format: Streaming video from Hoopla Digital on The Nook.

This is the fourth in a series of monthly reviews suggested by the guys at Your Face. This is Jason’s second pick. 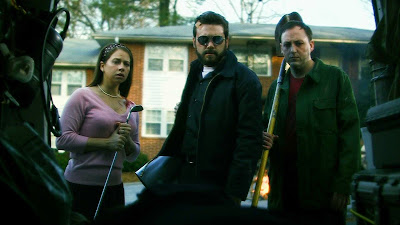 There are two movies called The Signal released in the last ten years, both of which seem to have horror elements. I confirmed with Jason that this was the one I was supposed to watch, and I needn’t have worried. A couple of minutes in, I was pretty sure that picked the right one. It wasn’t too hard to figure out that this was the sort of film that Jason would not only watch and love, but would also want to share with other people.

Evidently, The Signal borrows pretty heavily from Stephen King’s book Cell, but never acknowledges this. My guess is that since this was made with a budget of about $50,000, they couldn’t even afford the meeting. Essentially, all of humanity’s electronic media, at least in the city of Terminus, have simultaneously begun broadcasting a signal that intensifies the negative emotions of whomever encounters it. Since it comes through the television, the radio, and cell phones, this means pretty much everybody.

We start with Mya (Anessa Ramsey), who is currently having an affair with Ben (Justin Welborn). Unable to call home because of the signal problem, she cobbles together an excuse and goes home to her husband Lewis (AJ Bowen). People appear to be acting strangely all around her, and once she gets home, she finds Lewis and his friends Jerry (Matthew Stanton) and Rod (Sahr Ngaujah) fighting with the television because it will only play the dangerous signal. To demonstrate just how out of normal things are, Lewis, over a minor dispute, beats Jerry to death with a bat and then acts like nothing has happened.

The film is essentially divided into three parts. The first part is more or less a splatter film as the people in Mya’s and Lewis’s apartment complex begin wandering the halls and killing each other. Mya holes up in a nearby apartment to wait it out until she is captured by Rod. Rod, obviously agitated, nevertheless lets her go and the two try to escape, but Rod is shot and then attacks Mya in the car, causing her to crash it.

This takes us to the second section of the film, which is more or less a very dark comedy. Mya’s car has crashed outside of the apartment of Anna (Cheri Christian) and Ken (Christopher Thomas), who are planning a New Year’s Eve party. Ken succumbs to the signal, though, and Anna is forced to kill him. Under the influence of the signal herself, she proceeds to prepare for the party as if nothing is wrong. Enter Clark (Scott Poythress), a neighbor, who is still mainly sane and terrified of everything going on. It’s not too long before Lewis shows up looking for Mya and with murderous intent of everyone around him.

Eventually, we move to the final section. Ben has arrived and rescues Clark, who is showing some signs of both infection from the signal and moments of sanity. The two attempt to make it to the train station to find Mya and escape the city. Of course, Lewis is still around and following them.

There’s some inventiveness here, but less than it might first seem. In addition to having some parallels to King’s Cell, there are certainly pieces from films like The Crazies and Poltergeist on display here as well as moments of Re-Animator (the head in the vise scene is straight out of that one) and Evil Dead II (shovel decapitation). It’s been said that stealing from one source is plagiarism but stealing from many is research. In that respect, The Signal is well researched.

It is inventive in its use of gore, though. It doesn’t hold back on bringing a vast amount of pain and suffering to the table and doesn’t shy away from showing it. It’s not long before most of the cast is covered in blood, either their own or someone else’s. There are also some creative uses of power tools and insecticide.

The film gets a lot right. Frequently as people are hallucinating, we get to see the world through their eyes. When Anna believes that Clark has turned into Ken, for instance, we see him as Ken. When Lewis shows up and decides that Anna and Clark are actually Mya and Ben, that’s what we see as well. Some of the performances are very good as well. Scott Poythress’s Clark manages to be funny at times, but also to convey real paranoia and fear. It’s evident that he knows he’s frequently hallucinating, but that he’s also aware that those hallucinations can be beneficial to him in some situations. AJ Bowen’s Lewis is a terrifying figure entirely because he virtually always appears calm and rational despite being anything but calm or rational.

The Signal ends up being disjointed because of the middle section. Each of the parts of the film work better individually than the film does as a whole, but it’s impressive for its minuscule budget and manages to create a few new moments despite being a cobble from other, earlier films. I did enjoy it though, so Your Face hits 4 for 4.

Why to watch The Signal: It’s a very inventive piece of low-budget horror.
Why not to watch: How much better could this have been with a budget?