On the Road Again

Film: Road to Morocco
Format: Streaming video from Hoopla Digital on The Nook. 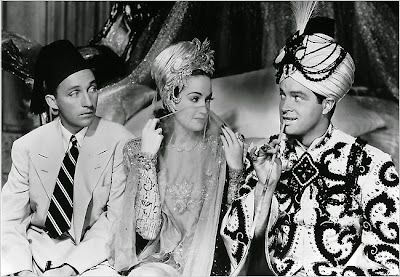 A film like Road to Morocco is difficult to deal with from a modern perspective. It is at once both fun and frustrating, both funny and infuriating. All of the Bing and Bob road movies are entertaining and this one has the added bonus of being entirely self-aware. But they’re also racist to a certain extent and flush with the sort of whitewashing frequent of the era. What else can you call it when a movie has both Dorothy Lamour and Anthony Quinn playing Arabs?

Like all of the road movies, we get our heroes abandoned, shipwrecked, or otherwise tossed out into the wilderness. In this case, Jeff Peters (Bing Crosby) and Orville “Turkey” Jackson (Bob Hope) are tossed off a ship and after a little panic, wash up in Morocco. The boys are hungry and broke, but soon discover that the mentally afflicted are treated as holy they try to work up a mentally damaged act that backfires. Later, the two sit in a restaurant and gorge themselves with plans to run out on the check. Instead, Jeff is approached by a large man and arranges to sell Orville into slavery for $200 with plans to make enough money to eventually buy him back.

Goaded into action by the ghost of their Aunt Lucy (Hope in drag), Jeff goes looking for Turkey and discovers that his friend has not, in fact, been sold into slavery. Instead, Turkey is engaged to be married to Princess Shalmar (Dorothy Lamour). Not content to let that happen, Jeff tries to work his way into Shalmar’s good graces until he discovers what’s actually happening. Shalmar has been told by her astrologer that her first husband will die within a week of their wedding, but that her second husband will lie a long and prosperous life. She’s planning on marrying Turkey so that she can then marry Mullay Kasim (Anthony Quinn).

Eventually, Jeff learns of this and Turkey learns of it, too. By this time, Shalmar has fallen for Jeff and her servant Mihirmah (Dona Drake) has fallen for Turkey. But then the astrologer learns that his predictions were wrong, Mullay Kasim learns the same thing, and all hell breaks loose. Of course, this is a comedy, which means that our two heroes will end up with the girls and won’t have their heads removed by Kasim’s men. And we’ll get a few songs along the way.

A big part of the success of the Road to… movies is that they are completely self-aware. There’s a movie going on, but both Bing and Bob are completely aware that they are in a movie. The opening number specifically references Dorothy Lamour and their contracts with Paramount, for instance. There are multiple instances of them speaking directly to the camera, and both Jeff and Turkey are less characters than they are extensions of Crosby’s and Hope’s personae. And that’s one of the selling points as well.

There is a downside, though, and that downside is the unplanned racism. Anything that isn’t American is essentially weird, strange, stupid, or backward. There’s not a great deal, or really any malice in this. It’s the sort of casual racism of the time that is prevalent in a lot of films and media in general of the 1940s. It comes across not so much as racism as something closer to nationalism. The “white folks” of the film aren’t specifically better than anyone else; it’s because they are Americans, admittedly white Americans, but Americans specifically.

In that way, the mild racism is almost forgivable because it comes across as such a part of the attitude of the time that it would be notable if it were any other way. And while Dorothy Lamour was about as white as I am (and that’s damn white), the film itself does involve romances between white Americans and Moroccan women. It’s a small thing, but it’s also out of character for the time, and in a good way.

It’s difficult not to like this film even if there are a couple of cringe moments. It’s light-hearted and fun, and the songs are good. It’s silly stuff but it doesn’t pretend to be anything that it isn’t. It’s made as a piece of entertaining fluff that was there to give people mired in World War II a smile, a song to lift their spirits, and a pretty girl to look at, and it does that admirably. It also doesn’t wear out its welcome, clocking in at a touch over 80 minutes.

Yeah, it’s never going to be the greatest thing ever made, but you’ll walk away from it happy, provided you can get past the jingoist undertones.

Why to watch Road to Morocco: Bing and Bob are a great comedy duo.
Why not to watch: If you can’t get past the good-natured racism, it’ll piss you off.