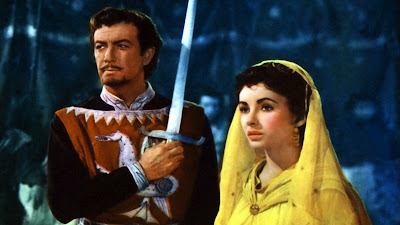 Because of my regular Friday posts, I tend to look for times when I can complete a particular Oscar category in a particular year. That’s the sole reason I watched Ivanhoe today. This isn’t one that I wasn’t looking forward to for a very specific reason: Robert Taylor. I have consistently found Robert Taylor to be so utterly dull that he makes Franchot Tone look like Captain Charisma. He’s bland on a saltine cracker. He’s Blandy McBlanderstein, and anything that stars him starts with a strike against it in my opinion.

Ivanhoe is essentially the same story as The Adventures of Robin Hood from a completely different perspective. So, while there’s still a Richard the Lionheart and still a King John and even a Locksley, most of the other familiar characters—Maid Marian, the Sheriff of Nottingham, Little John—aren’t a part of this at all. Instead, we’re going to see the story from the perspective of Wilfred of Ivanhoe (Robert Taylor), a Saxon knight who accompanied Richard on the Crusades. On his way home, Ivanhoe discovers that Richard has been imprisoned and that the asked-for ransom is 150,000 marks of silver. Worse, since Richard’s brother John (Guy Rolfe) is usurping the throne, there is no plan to pay that ransom and return Richard to England.

Wilfred of Ivanhoe has additional problems. He went on the Crusades against the will of his father Cedric (Finlay Currie), who essentially disowns him. This is an additional difficulty for Ivanhoe because his love Rowena (Joan Fontaine) is his father’s ward. The main reason for the rift between Ivanhoe and his father is that Richard is a Norman rather than a Saxon, and there’s a great deal of infighting between the two groups. On his way out, Ivanhoe frees his father’s bondservant/slave Wamba (Emlyn Williams) and makes him a squire.

Round about this time, a group of Norman knights show up at Cedric’s place as does an old wandering Jew named Isaac (Felix Aylmer). The knights try to rob poor Isaac (because Norman = bad in the Ivanhoe world), but Ivanhoe saves the old man and escorts him back to his home in York. It is here that Ivanhoe encounters our romantic complication: Rebecca (Elizabeth Taylor), who is immediately smitten with the dashing (if dead boring) knight. In fact, she gives he her mother’s jewels so that he can buy armor and a horse and challenge the Normans at a jousting tournament for some reason.

Anyway, the Normans completely kick everyone’s ass at the tournament until Ivanhoe shows up to challenge the top five Norman baddies. He deals with the first three easily, but is wounded in his fourth joust. Because of this, he fails in his final bout against Brian de Bois-Guilbert (George Sanders). Meanwhile, Brian catches sight of Rebecca and immediately falls head over heels for her. Ivanhoe’s wounds are tended to by Rebecca, and soon enough the Normans are out searching for those Saxons and Jews who want to bring back Richard. Ivanhoe ends up with Robin Hood (Harold Warrender) while just about everybody else—Cedric, Isaac, Rebecca, Wamba, and Rowena, are captured by Brian de Bois-Guilbert.

Eventually, this ends in a trial by combat for the life of Rebecca between Ivanhoe (whom she loves) and de Bois-Guilbert (who loves her).

The high points here are the battle sequences. They’re actually really good. The jousts are cool and the final fight between Ivanhoe and de Bois-Guilbert is pretty cool, particularly because the drop the lances and go after each other with an axe and a morning star respectively. These are both solid sequences, but pale in comparison to the massive attack by Robin Hood and his men on the castle of Brian de Bois-Guilbert. This is a good, long battle sequence with guys falling off towers, fires, arrows, and sword battles. It’s a hell of a lot of fun.

The problem is that this simply isn’t anywhere close to The Adventures of Robin Hood, which it very much wants to be. Joan Fontaine isn’t in the film enough to be worthy of much notice and Elizabeth Taylor seems really miscast in the role of Rebecca. And worse is any time that Robert Taylor is on screen without having his head inside a helmet. The man is just damn dull. The rest of the cast is actually pretty good. Guy Rolfe is a great King John—he’s weasely and dastardly and has a kick-ass beard.

Ivanhoe isn’t bad, but it’s also not that great. Given the choice, I would always pick The Adventures of Robin Hood over this every day of the week and twice on Sunday. Robin Hood has better characters, more action, and a better plot. Even if it didn’t, Errol Flynn is a lot more interesting to watch than Robert Taylor.

Why to watch Ivanhoe: Another take on the Richard the Lionheart story.
Why not to watch: The Adventures of Robin Hood is so much better and tells the same basic story.

Posted by SJHoneywell at 8:46 PM