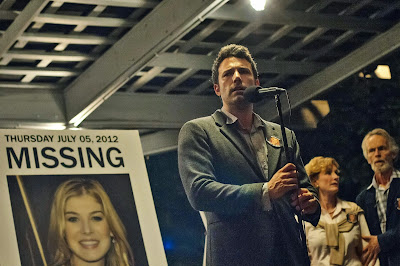 I think the Academy hates Ben Affleck. I say this despite him having won two Oscars. Argo, which he produced, starred in, and directed, saw him unnominated as an actor or director. Things got worse with Gone Girl, a tense mystery thriller with a complex, intriguing plot. Despite a great screenplay, solid direction from David Fincher, and a solid performance from Affleck, it was nominated only for Best Actress. I can only think that Ben Affleck’s presence is to blame, because there are some nomination misses here.

That said, I’m not really sure how much I like Gone Girl. I remember people going crazy for it when it first came out, but since I rarely go to the theater, I didn’t rush off to see it. I even consider myself a fan of Fincher, so were I going to see one of the many films that were looking for nominations at the end of last year, this is one that would definitely be on my radar. This has a lot of the hallmarks of David Fincher—complex plot, tons of flashbacks, huge sections of the film designed specifically to mislead the audience…even a Trent Reznor/Atticus Ross soundtrack. But there’s something about this film that’s like chewing on tinfoil.

Gone Girl is something very much like a film noir in a lot of respects. On the day of his fifth anniversary, Nick Dunne (Ben Affleck) discovers that his wife is missing. Amy (Rosamund Pike) was the inspiration for a series of children’s books written by her parents, which makes her something of a celebrity, and her disappearance becomes national news very quickly. Slowly, clues begin to mount up that Nick has been an abusive husband, has assaulted her and threatened her, and more and more public opinion turns against Nick, and eventually to his twin sister Margo (Carrie Coon).

While police detective Rhonda Boney (Kim Dickens) starts pulling threads that more and more link Nick to his wife’s disappearance, Nick begins to do some searching on his own. He protests his innocence to the world and discovers that Amy has a past of doing similar things to other men. She accused one man of rape and another of stalking, something that the first flatly denies and the second refuses to talk about. And, of course, Amy is merely missing, not dead as is assumed by the rest of the world. All of this is an elaborate ruse, a fiction put together by Amy to cause the police to arrest, try, and convict Nick and eventually give him the death penalty. This is in retaliation for Nick’s marital infidelities.

And of course things spin out of control for both Nick and Amy. When Amy is robbed of her carefully stashed money by a couple living in a cabin nearby to where she has retreated, her incredibly careful plans are thrown into chaos and she reaches out to the man she accused of stalking her, the incredibly wealthy Desi Collings (Neil Patrick Harris). Meanwhile, Nick hires Tanner Bolt (Tyler Perry), a lawyer with a reputation for getting husbands accused of murdering their wives off. While all of this is going on, Nick is constantly being degraded in the press by Nancy Grace clone Ellen Abbott (Missi Pyle).

I was initially surprised at Rosamund Pike’s Oscar nomination because she is virtually absent from the first hour of the film. Once she becomes a larger part of the film’s narrative, though, I understood why she was nominated for the role. Pike’s Amy Dunne is one of the most cold-blooded, heartless, and stone cold femme fatales to ever be shown on a big screen. Pike pulls this role off with a quiet intensity that is both compelling and truly chilling.

When I said at the top that there were some missing nominations, I wasn’t kidding. I think Affleck should have been nominated here. His performance is a combination of rage, frustration, fear, and panic, and it’s something he does very well. Nick starts the film completely clueless in his actions and in what he thinks Amy is capable of doing, but quickly wises up. The final 20 minutes or so are almost completely focused on the situation that he finds himself in, and I’m not sure he could have played this better.

I’d have also expected a nod to Carrie Coon, who is excellent throughout. The brother/sister relationship between Affleck and Coon is believable, and she’s great in every scene she’s in, from her droll opening to her tearful and frustrated finale. It’s worth noting as well that it’s the first thing I think Tyler Perry’s been watchable in.

For what it’s worth, I think Trent Reznor and Atticus Ross were robbed of a nomination as well. The soundtrack is exactly the sort of thing the film needs. It’s frequently unobtrusive, but it also genuinely adds to the tension and fear of many of the scenes.

But for all this, I’m not sure this is one I’d want to watch again. It’s one of those films where the sum of the parts is greater than the whole. I like pieces of this far more than I like the whole film. That’s not a knock on the film; I think Fincher hits me that way sometimes. Gone Girl has a lot going for it, but I wish I liked the entire package as much as I like its individual pieces.

Why to watch Gone Girl: Human misery on a scale both grand and tawdry.
Why not to watch: There’s no happy ending here.