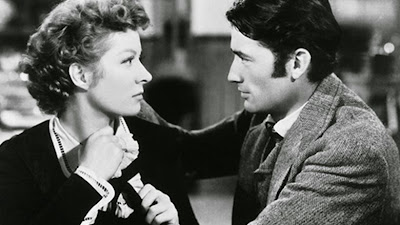 It’s hard for me to dislike Gregory Peck no matter what the movie and no matter the role. Part of it is that deep, resonant voice. Part is the man’s presence. And part of it is probably that he played Atticus Finch. With The Valley of Decision, Gregory Peck’s presence is just the tip of the proverbial iceberg, though. Also along for the ride here are Lionel Barrymore, Dan Duryea, Jessica Tandy, and the great Greer Garson, who earned her fifth Best Actress nomination in as many years for this film. There’s a lot to love with a cast as deep as this one.

With The Valley of Decision, though, the love doesn’t really extend a lot further than the cast. The story here is one that is easy to see coming a mile away, provided you’ve ever seen a single movie from this era before. There are a few things we’re supposed to want by the end of this film, and so it’s not surprise that The Valley of Decision will serve those up to us no matter how convoluted the path we take to get there might become. This isn’t a bad film by any stretch of the imagination. It’s just a film that you’ve almost certainly scene before in a different exterior package.

Mary Rafferty (Greer Garson) is the daughter of Irish immigrants living in Pittsburgh in the late 19th century. Pittsburgh is a steel town, and in the case of the Raffertys, that means working for the steel mill owned by the Scott family. Mary’s father Pat (Lionel Barrymore) was injured on the job and is confined to a wheelchair. He has no love for the Scotts because of his injury despite having been kept on the payroll after his accident, at full pay no less. So it’s a cause of immediate tension when Mary takes a job as a maid at the Scott residence.

What she discovers is something very different than she expects. As it happens, her first day on the job coincides with the return of Paul Scott (Gregory Peck) from overseas. Mary gets a crash course on the Scott family. Paul is hard-working and dedicated to the mill. Son William Jr. (Dan Duryea) is more concerned with appearances and his own pleasure, as is daughter Constance (Marsha Hunt). Youngest son Ted (Marshall Thompson) is completely concerned with how much trouble he can get into and how much money he can spend. The real revelation, though is Mrs. Scott (Gladys Cooper), an open and loving woman and Mr. Scott (Donald Crisp), who is far from the ogre Mary’s father paints him to be.

While Mary’s life with the Scotts is much more than she could have hoped, it’s not without its problems. Of course there is the budding romance between her and Paul, tempered by the family’s insistence that Paul spend more and more time with Louise Kane (Jessica Tandy), who is very much a child of privilege. There’s also the continual tension caused in Mary’s family by her position in the first place. Her romance with Paul is put on hiatus when Constance marries and moves to England, taking Mary with her. But eventually Mary returns just as the mill has shut down over unionization and worker demands. The end game of this makes it seem that our star-crossed lovers will remain so forever.

The Valley of Decision can perhaps be forgiven for not straying too far from where we all can tell it wants to go. It’s a product of its time in that respect. There’s a bit of tragic romance here that is really meant to sell the whole thing—we’re supposed to be invested in the idea that Paul’s and Mary’s love cannot be in the two worlds in which they live. How could Mary go from serving the family to suddenly being their equal? Oh, the pathos.

Admittedly, the setting of post-Civil War Pittsburgh and centering things around a steel mill is an interesting twist, but that’s really the only interesting twist here. It’s a very old story wrapped up in a slightly new box, and really only parts of that box are new. Change Paul Scott into minor nobility, and this is a story everyone has seen multiple times.

So it really comes down to the people on the screen, and this is a truly great cast. I can imagine that at the time, people liked this film a lot. This came out either just as World War II was wrapping up or had just ended, and the need for something perhaps a little fluffy and romance-y was needed by the general population. They can certainly be forgiven for wanting a film that wasn’t hard-hitting and offered something to hope for through its running time.

Today, The Valley of Decision feels very dated because it is very dated. It’s a fine film for its time, but one that only fans of the era will have much use for today.

Posted by SJHoneywell at 7:41 PM