Never Judge a Film by its Title 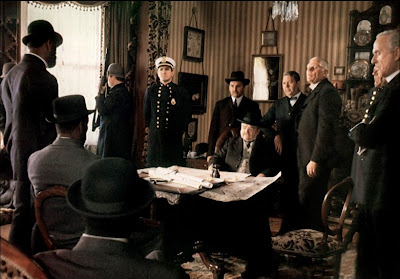 Every now and then I get reminded of something that I should remember more often. You should never judge what a movie is going to be about before you actually watch the movie. I figured that a movie called Ragtime would be a drama that centered on people playing ragtime music. I expected something akin to a Scott Joplin soundtrack and a movie that took place in dance halls and the like. That’s not what this is about, although there is a character who plays a little ragtime piano. This is far more about race and class than it is about anything else.

It’s also one of those films that has a bunch of characters who all interact with each other on different levels and in different ways. Very oddly, some of the main characters are never named and are referred to in the credits only has Father (James Olson), Mother (Mary Steenburgen), and Younger Brother (Brad Dourif). As is often the case with a film like this, it’s easier to talk about each story individually than to go with a chronological blow-by-blow.

During the ragtime era around the turn of the last century, Father runs a successful business that deals with things like bunting, trophies, and the like. Younger Brother is his brother-in-law, and he runs the fireworks side of the business, which has suddenly become the firm’s most profitable area. One day, the family finds a young black infant in their garden. Soon enough the police have a potential culprit for abandoning the baby. This is Sarah (Debbie Allen), who is saved from prosecution by Mother, who hires her on the spot.

Eventually, we meet Coalhouse Walker Jr. (Howard Rollins), a piano player and the father of the child. He shows up because he now has a steady job and this means that he can marry Sarah and take care of their child. Eventually, the family learns to accept Coalhouse, who is educated, well-spoken, and talented. However, being those three things makes him a target, and he is harassed by the members of a volunteer fire brigade, mostly because Coalhouse owns his own Model T. What happens with the Model T is what drives the bulk of the third act.

Alongside this story is that of Henry Thaw (Robert Joy) and Evelyn Nesbit (Elizabeth McGovern), Henry shoots an artist who has used Evelyn as a model for a nude statue. Evelyn has been promised a million dollars from Henry’s family if his trial turns out favorably, which makes her perjure herself on the stand. However, since she has also started an affair with Younger Brother, things don’t work out the way she plans. Instead, she goes back to her former days on the stage and becomes a movie actress, working for an artist named Tateh (Mandy Patinkin), who eventually begins a relationship with Mother.

The third act turns around Coalhouse Walker’s Model T. He wants justice for what happens to his car, and he’s not able to get it, which causes him to being a reign of terror targeting volunteer fire stations around New York. Eventually, it leads to Coalhouse and a group of friends (including Younger Brother, who uses his knowledge of fireworks to supply the men with explosives) take over the Pierpont Morgan Library in an effort to force the situation. This brings out Police Commissioner Rhinelander Waldo (James Cagney in his last big screen role) to mediate the situation as best he can, with the assistance of Booker T. Washington (Moses Gunn).

So the story is fairy complex and takes a lot of turns, but this is well-directed enough to be easy to follow. It also turns mostly on the performances, a few of which are key. Howard Rollins, certainly, is one of the major players here. There’s a reason he was nominated for Best Supporting Actor for this role. He brings both intense anger and a sort of quiet dignity to the role of Coalhouse Walker, and he’s perfectly cast. I also like Brad Dourif here, but that’s not a huge shock since I tend to like Brad Dourif in general. The same can be said of Moses Gunn, who is a personal favorite character actor of mine.

I want to mention Cagney as well. This is a man in his eighties acting in this role, and Cagney is great start to finish. He’s completely in charge when he’s on the screen, and like Rollins, adds a huge amount of gravitas to the role he is playing. His voice is completely unmistakable, so there is no doubt that this is Cagney playing the role, but he’s also a complete character. He’s totally believable, and the man hadn’t really lost a step since his heyday.

The screenplay is impressive in the way that it juggles all of the various plots and manages to do this seamlessly and without confusion. I’d have liked the three characters to have names, but that’s a minor quibble since it actually never shows up in the movie itself. All the way through, this is a story that makes perfect sense and every escalation of things is, while extreme for the offense committed, is believable on all sides.

All in all, Ragtime is a good film, even a very good one, but not really a great one. Despite Forman’s solid direction, this is a film that meanders far too much to e truly great. I don’t think it’s bloated at all since I can’t think of anything I’d cut, but it does feel like it’s trying to do too much even in the context of a fairly long film.

Why to watch Ragtime: A sweeping story that still has some social impact today.
Why not to watch: It’s not always sure what story it wants to tell.