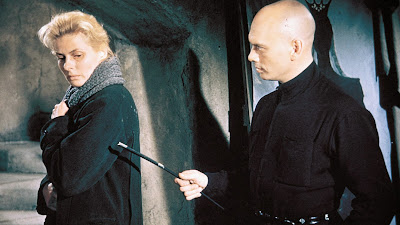 A while ago, I commented on just how good 1935 was for Charles Laughton; the man was in three movies nominated for Best Picture, one of which won. That’s a hell of a good year. Yul Brynner had a good year in 1956. He walked away with an Oscar for The King and I and acted across from Ingrid Bergman in her Oscar-winning performance in Anastasia. Okay, I’ll admit that I’m prone to like Yul Brynner in general. I’m not sure if it’s the bald head, the piercing stare, or the Mongolian-tinged accent, but I’ll watch him in just about anything.

Anastasia is epic in everything but length in the sense that this is massive, sweeping story about history and romance with any number of plot twists. And like many an epic, this is a story deeply involved in Russian history. It seems impossible to touch on any aspect of Russian history without the story becoming something massive, at least in tone and scope. Anastasia tells one of the great myths of Russian history post-revolution. It’s well known that the family of Tsar Nicholas II was killed by the Bolsheviks, but there was also the story that the tsar’s daughter Anastasia somehow survived the slaughter. What then would happen if Anastasia Nicolaevna had survived?

Anastasia eventually does have an opinion on this and starts from the position that Anastasia was killed with the rest of the Romanovs. Three men, though, have banked their future and their fortune on both the idea that Anastasia is truly dead and that they will be able to find someone who can impersonate her to claim 10 million pounds placed there by Tsar Nicholas II for his children. If someone can pull off the ruse well enough, the money can be claimed.

Chernov (Akim Tamiroff) is constantly worried that this corporation funded by the former Russian elite is about to go bankrupt and that those elite will wring their money out of him and Petrovin (Sacha Pitoeff), one of the partners. The only one of the three men running the scam with total confidence is General Sergei Pavlovich Bounine (Yul Brynner). His confidence is greatly increased when he scoops up Anna Koreff (Ingrid Bergman) from the streets. Anna, a former mental patient, has particular qualities that will help pass her off as Anastasia. Those qualities include being the right height, having the right figure, and having unexplained scars on her palms and temple as if from bullet wounds.

Working against them are the facts that Anna is suicidal and an amnesiac. Bounine and his comrades attempt to cure this by giving her purpose and new memories—that she is actually Anastasia Nicolaevna. At a gathering in Paris (since all of these White Russian former nobles and important leaders are in exile), the reaction from the crowd is mixed. The plan becomes to take Anna/Anastasia to Copenhagen to put her in front of the dowager Empress Maria Feodorovna (Helen Hayes), Anastasia’s grandmother, which will also bring her into contact with Anastasia’s former fiancé, her second cousin Prince Paul (Ivan Desny). A word from them will confirm her identity.

This meeting takes some real doing and leads to the meeting between the two as well as a sudden rekindling of the romance between “Anastasia” and Prince Paul, at which Bounine finds himself suddenly and inexplicably jealous. And this, of course, leads to the conclusion that we kind of suspected would happen when the film started. This is, after all, a film from the mid-1950s and romance is always king.

The key scene is the meeting between Anastasia and the dowager empress. Both Ingrid Bergman and Helen Hayes are at the best in this scene. The back and forth between the two of them, each taking the upper hand at times and surrendering in others, is one of the great dramatic scenes of its decade, two actresses at the height of their powers. This is a scene that well could have been pure melodrama and is instead simply dramatic and perfectly effective.

The question that the film ultimately asks is not what should happen or who Anna/Anastasia should end up with, but whether or not she is the real Anastasia Nicolaevna. There are a great number of hints dropped through the film that intensify as it continues that she is the real Anastasia. It’s a lovely little fantasy in that regard, and it’s more or less what gives us our Hollywood ending. Without that, this is just the story of an elaborate hoax.

Is it good? Yeah, it is. I really didn’t expect much out of it except that it starred Yul Brynner, who I pretty much always like watching in any situation. But this film is far better than I had expected it to be, and that’s always a wonderful surprise.

Why to watch Anastasia: Yul Goddam Brynner.
Why not to watch: Ultimately, it’s hokum.