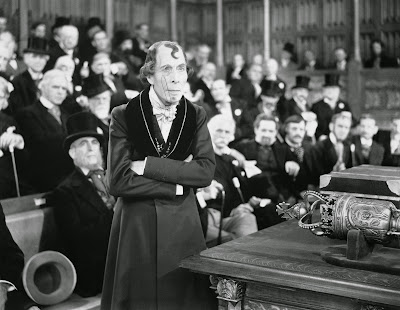 Sometimes, the movies that I watch on a given day are ones I look forward to and sometimes they are just a box to check off. It’s what happens when you watch films off a master list. With Disraeli, it was very much the second type, at least until I got a little way into it. While nominated for awards in the third Oscars ceremony, Disraeli was released in 1929, making it one of the early talkies. It’s also the debut of George Arliss in talkie films and it’s a good enough debut that he won the Best Actor Oscar for this role.

This is an odd film in that it doesn’t follow the man’s whole life and it focuses on a piece of history that is unusual for the subject of a film to say the least. Benjamin Disraeli (George Arliss) is the Prime Minister of Great Britain when the film opens, and he faces a great deal of opposition for a number of reasons. Disraeli was descended from immigrants and was born a Jew (although he eventually converted to the Anglican faith), not necessarily a recipe for success in mid-late nineteenth century British politics. He was also a man of big ideas focused on not simply his own political career but on the image of his country and the state of the greater empire.

There are a couple of minor plot points at work in the greater narrative here. The main story is that the Khedive of Egypt has run out of money and is desperate to stay solvent. His plan is to sell his controlling interests in the Suez Canal to the highest bidder. Acquiring those shares of the canal would solidify Britain’s hold on India, something desperately wanted by Disraeli. His reputation and past, though, put him at odds with many including Lord Michael Probert (David Torrence), the head of the Bank of England. Probert refuses to lend the money for the purchase and claims that he never will lend money for any of Disraeli’s schemes.

Meanwhile, it becomes evident that Russia wants the Suez, which will allow them inroads into India. Disraeli’s office is plagued by spies, specifically Mrs. Travers (Doris Lloyd) who seeks information on the social end of the scale and Foljambe (Norman Cannon), who is Disraeli’s secretary. Disraeli is aware of them, though—he specifically hired Foljambe to feed him false information and to stay aware of the man’s activities.

The minor plot that runs through the film concerns Clarissa (Joan Bennett) and Charles Deeford (Anthony Bushell). Deeford is a man of means with desires that don’t run past building houses. He proposes marriage to Clarissa, who flat turns him down because of his lack of ambition. However, the two do actually love each other, so Disraeli hires Charles to work for him and turn him into a man of ambition. In fact, it’s Charles who eventually is sent to Egypt to purchase the canal, backed by the funds of a private bank run by Hugh Myers (Ivan F. Simpson).

One of the problems of films of this era is that the advent of sound caused a real change in the way that stories were told. Rather than being shown something, we’re often simply told what happens. Once Charles heads off to Egypt, he appears only in the form of telegrams back to Disraeli until the very end. There’s intrigue here, particularly when it comes to Mrs. Travers, but again, we just hear about things that happen rather than actually seeing things happen.

What makes the whole film work is George Arliss, who is obviously having a lot of fun in this role. Arliss plays Disraeli as a man who is resourceful and very smart as well as consummately aware of everything going on around him. His Disraeli is a poker player, more or less, working in a high stakes game and frequently capable of pulling off a supreme bluff if it gets him what he wants in the end.

There are some issues here, though. Eventually, Disraeli outs Mrs. Travers as someone working for the Russians, and there are absolutely no consequences for her. In fact, Mrs. Travers is virtually single-handedly responsible for destroying the business of Hugh Myers, the sort of thing that would result in a severe prison sentence in the real world, and she merely sits at a table like a cat that just ate a canary. There’s no real resolution with her, and it’s very unsatisfying.

Still, there’s enough here that while Disraeli isn’t a film I would seek out to see again, it’s also one that I wouldn’t be upset at seeing again. Arliss has a lot of fun here, and I love the relationship between him and his wife, Lady Beaconsfield (Florence Arliss, who happened to be George Arliss’s actual wife). I love that she calls him “Dizzy,” a nickname picked up by a few other people by the time the film ends. I also love that George Arliss completely rocks a monocle.

Why to watch Disraeli: A piece of history little known, at least in the U.S.
Why not to watch: Despite some excellent parts, it’s very much an early talkie.