Film: The Love Parade
Format: DVD from NetFlix on laptop. 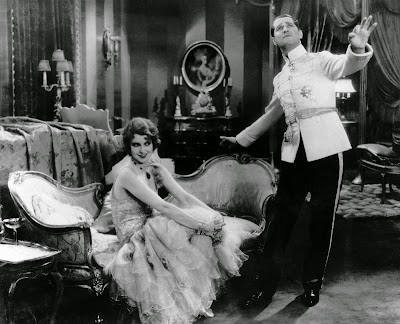 Maurice Chevalier was involved, nay instrumental, in one of the weirdest sub-genres of film in history. This is the (I think) third musical I’ve seen where he plays essentially a dress soldier, the sort who looks good in a uniform but has never been (and never will be ) involved in combat. His entire reason for existence is not conquest on the battlefield, but conquest in the bedroom. I realize this came before The Smiling Lieutenant, but that’s where my thoughts went with The Love Parade, but this is a far better film than the fluff of Lubitsch’s film the next year.

Really, though, The Love Parade is what is described in the previous paragraph. Count Alfred Renard (Chevalier) is a part of the ambassador entourage to Paris of the fictional country of Sylvania. He is recalled to his country because of one too many scandals involving the high ranking women of Paris. While in Paris he has acquired a series of belt notches, an outrageous French accent, and a servant named Jacques (Lupino Lane) who has a reputation among the servant class much like Alfred does among the nobility. Jacques persuades Alfred to take him back to Sylvania with him, and off they go to Alfred’s home and what will likely be an unpleasant meeting with his queen.

As it happens, the most pressing order of business in Sylvania is finding a suitable husband for Queen Louise (Jeanette MacDonald). She’s tired of all the marriage talk and really just wants a real romance. Enter Alfred—you knew this was going to happen. Rather than being shocked by Alfred’s reputation, she’s intrigued, and before you can actually say the words out loud, the two are married. This coincides with a romance between Jacques and Lulu (Lillian Roth), one of the queen’s servants.

Things, however, are not all rosy once the marriage happens. It turns out that becoming the Prince Consort to Queen Louise means that Alfred has absolutely no powers and the single duty of essentially pleasing the queen and (one assumes) helping to produce an heir for the throne of Sylvania. Alfred is unable to even make suggestions for how to govern the country or do anything, even if his ideas are good and could potentially save the country economically. Once he discovers this and that he actually does have some power after all, the final half hour or so of the film is an exercise in sexual politics as only Ernst Lubitsch could direct.

There’s genuinely a lot to like here, not the least of which is the sexual politics on display throughout the film. Some of this, naturally, comes down to actual sex but most of it has to do with the power in the relationship and who is in charge of what. One of the major plot points leading into the third act is that several people—particularly the ambassador from Afghanistan—have predicted an unhappy marriage. Should there appear to be tension in the royal marriage, rumor will eventually get back to the United States, and a desperately needed loan will fall apart, bankrupting Sylvania. It’s in this moment that Alfred learns that he is both powerless in the government and supremely powerful in what he can hold over Queen Louise. What follows from this happens completely naturally and is also realized perfectly.

The film also benefits hugely from the presence of Lupino Lane, who might well be the most acrobatic comic dancer in film history. He has a couple of numbers across from Lillian Roth that are absolutely astounding. I can’t for the life of me figure out why he didn’t become a household name—he does things that other dancers of the time couldn’t have dreamed of doing, and does them with a natural grace and comic timing that are astonishing to behold.

Jeanette MacDonald is more of a mixed bag in this film. I’ve said what I’m about to say in the past, but it bears repeating here. MacDonald had wonderful comic timing. She’s a pleasure to watch on screen in a light comedy role. My issue with her is entirely with her singing, which is operatic, and not in a good way. Keep her away from the notes, and I could watch her all day.

As for Maurice Chevalier, well, he’s Maurice Chevalier. He spends a good portion of the film (as is often the case) speaking directly to the audience. He’s also the purest distillation of a French stereotype every shown on film. But he’s also difficult to dislike.

It’s worth noting that The Love Parade is the first time that a musical was put on screen where people sang to each other and/or sang their feelings rather than having the music be a part of something happening on a stage. The songs are actually integral to the story, and that was unique in 1929 when this film was released. That’s either a good thing or a bad thing, but it very much is a thing—this is the first musical in the style of what people tend to think of when something is labelled as such. It also happens to be Lubitsch’s first film with sound and Jeanette MacDonald’s screen debut.

All in all, I liked this a lot more than I thought I would. Lubitsch was a hell of a good director, and The Love Parade is a great example of why.

Why to watch The Love Parade: It’s the first true “musical” musical.
Why not to watch: Jeanette MacDonald’s operatic singing style.