I'm Not Half the Man I Used to Be

Film: The Men
Format: Streaming video from NetFlix on laptop. 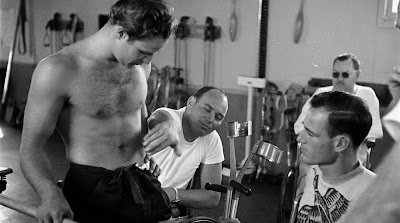 When a movie is about to go off streaming on NetFlix, I go into a little bit of panic mode. In most cases, the movies that vanish are available on disc, but having less to worry about in the queue is a good thing. Typically, this happens at the end of the month. In the case of The Men, I got a bonus day. But it was today or stick it back in the queue for this one, so it was time to pull the trigger on it.

I knew nothing about this film going in except that it was the debut film for Marlon Brando and that it was very short. So it was surprising to discover that this was not (as the NetFlix summary suggests) a film about a man recovering from “physical and emotional wounds,” but about men who became paraplegics during World War II. This sort of heavy material is always unexpected by me in a film of this vintage. I’m not sure why this is, since this comes a good four years after The Best Years of Our Lives, which didn’t pull its punches much in a lot of respects either.

Ken (Marlon Brando) is wounded during the war, and that wound has severed his spinal cord. He has not much feeling around his waist and his legs are completely dead. As a former football star and physical guy, he is naturally depressed. Eventually, Dr. Brock (Everett Sloane) who heads the ward of paraplegic patients decides that Ken has been coddled enough and puts him in the main ward with the rest of the recovering patients.

It is here that Ken encounters Norm (Jack Webb), Leo (Richard Erdman), and Angel (Arthur Jurado), who become his friends after a rocky start. It takes him awhile, but eventually, Ken starts to come around and work to improve his physical condition. A great deal of this is caused by the presence of Ellen (Teresa Wright) to whom he was engaged before the war. Through the first two acts of the film, Ken vacillates between wanting the normalcy he had always envisioned and believing that he and Ellen can make it work and believing that she would be better off without him and with a man who can walk and (more than likely) have children.

The Men, while fully a film of its era, doesn’t hold back on the way these men feel and feel they are treated by the world outside of the hospital. Norm is extremely smart but still manages to get suckered by a girl who takes him for a load of money because he’s desperate to be accepted. Leo puts on a happy face but feels that essentially his life is over and he lives now to make bets on horses. Angel, desperate to get out of the hospital to try to provide for his family, is convinced that his life can be normal.

Slowly, Ken starts to come out of his funk, but suffers a terrible setback when Angel is suddenly very sick. It turns out that there was a piece of shrapnel still in his back that has moved, and Angel develops spinal meningitis and without warning, dies.

Eventually, Ellen convinces Ken to marry her against the objections of her parents. But even that goes sour as the wedding night becomes strained, as does the marriage almost immediately. Ken winds up back in the hospital. I won’t spoil the third act or even state specifically why Ken is forced to return to the hospital. Suffice it to say that even if the film doesn’t end particularly happily, it at least ends on an upbeat note, offering some hope for the future of Ken and Ellen. What it doesn’t do, and I admire the film for this greatly, is pretend that Ken will ever have the hope of walking again. The third act goes by too quickly, but in a sense that’s true of the film. That said, it tells the story it wants to.

There’s a lot that The Men does right. The big thing is that it sticks the landing beautifully. This is a film that very easily could have turned sappy and maudlin and it doesn’t. It does end with that possibility of something good in the future, but it also ends with us knowing that Ken and Ellen have a great deal of problems ahead of them, and that one of those problems is Ken’s tendency to become depressed and to lash out. We get tough love at the close of the film, and it comes off as genuine, both from Norm and from Dr. Brock. It’s also nice to see Ellen turn out to have some grit in her.

This is Brando before he became Brando, of course, but not much before. He was Oscar nominated all four of the four years after this film was released and the beginnings of him at the height of his power as an actor are all here. Again, this would be a role easy to turn into something pitiable and thus ineffective. Instead, Brando plays Ken as a man who is deeply troubled and the whole thing works.

Throw in some good performances from Jack Webb, Everett Sloane and Virginia Farmer as the head nurse, and you’ve got something very much worth your time.

I’d like to close with a note about Arthur Jurado, who plays Angel. Jurado was a real vet from World War II and was really crippled during the war. The Men is his only film credit, which is a shame. Born in another era, Jurado could have had a career despite being confined to a wheelchair.

Why to watch The Men: It doesn’t play nice with a serious issue.
Why not to watch: The third act is rushed.