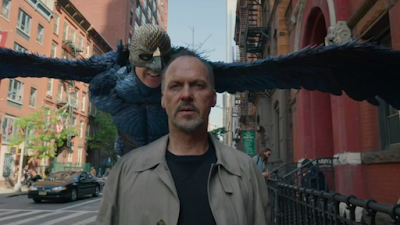 I’m currently reading the book “Blink” by Malcolm Gladwell. The book is about rapid cognition—about how we often get a very deep feeling of something from a very short glimpse, what Gladwell calls “thin slicing.” In the chapter I just finished, he talks about the show All in the Family and about how it tested poorly with audiences initially with the pilot, but was put on air anyway because its network could afford to take a chance on it. The show, of course, was a huge hit. The main reason it tested poorly was that it was simply too new. Audiences didn’t know how to come at it; they couldn’t put it into a specific category. I think the same thing is true for me of Birdman, or the Unexpected Virtue of Ignorance.

I honestly don’t know how to come at this film. There were times while watching where I felt as if I was under assault by the film. Long stretches are a constant barrage of noise and movement, chatter, swearing, fantasy mixed with reality. It feels like there is so much to concentrate on and so few guidelines to tell what is real from what is false. The film plays merry hob with time, moving seamlessly during a single pan from early in the day to later in the same day without a single transition. It all does fit together, but so much is simply assumed of the audience to make sense of it without much in the way of help.

This is not to say that I don’t understand the film, because I’m pretty sure that I do. But there are a lot of layers here and a lot of subtext. Everything works on multiple levels throughout the film. It’s not so much playing with our expectations but playing with what we think and know and have experienced and using that to further push the narrative and everything that goes on around it. I can’t honestly decide if Birdman is one of the most brilliant films I have seen in a long time or simply something I felt compelled to watch because I simply couldn’t turn it off.

Riggan Thompson (Michael Keaton) is a former movie star most famous for a trio of films about a superhero named Birdman. His career is over, though, and this has done a jackbooted tap danc on his ego. Looking to salvage what he can of his life and his career, Thompson has adapted the Raymond Carver short story “What We Talk about When We Talk about Love” for the stage and is directing and starring in the production on Broadway. He has staked everything on this—his career, his reputation, and all of his money. Assisting him are Jake (Zach Galifianakis), his friend and lawyer; Sam (Emma Stone), his assistant, daughter, and a recovering addict; and Laura (Andrea Riseborough), one of his co-stars and current girlfriend.

Just before the preview runs, a light falls from the rigging and brains Ralph (Jeremy Shamos), the other male star of the play. Broadway actor Mike Shiner (Edward Norton) is brought in as a replacement. Shiner happens to be the live-in boyfriend of Lesley (Naomi Watts), the other female lead in the play. And nothing is going right for anyone. The preview runs are plagued with problems. Shiner is belligerent and demanding, Lesley may or may not be pregnant, Riggan is plagued with doubts. Worse, Riggan also appears to actually have telekinetic powers (at least when he is alone) and may be actively schizophrenic and self-destructive. But, as they say in the business, the show must go on.

I don’t often come back to my reviews and edit them, but I may have to in the case of Birdman. I tend to write these reviews off-the-cuff, directly after I watch them, often jotting notes while watching that eventually get molded into what I post here. With Birdman, I’m not sure I am capable of putting all of that into coherent thought this soon ater watching. Again, this may simply be too new for me to fully grok so soon after the final credits have rolled. And ultimately, we’re never really sure what of it is real and what of it is not.

But I can say this--Birdman has a lot going for it. It feels like a long time since Edward Norton was this good. It feels like a long time since Michael Keaton was this relevant and interesting. Emma Stone was nominated for a supporting role, and that nomination seems to stem from a single scene in the middle of the film that is played just about perfectly. It’s also filled with long, brilliantly staged tracking shots that seem to go on forever. Part of the relentless assault of the film comes from these shots that never end and thus never give us a respite from the constant sensory barrage of the film. It’s genius even if (and probably because) it is so relentless.

I mentioned above that this is a film that works on many levels. In the film, Riggan Thompson is famous for playing a superhero, a film series that he mentions ended in 1992. That happens to be the last year that Michael Keaton played Batman. These sorts of self-referential ideas run through the entire film.

Is it good? I think it is. I think it might even be great. But I still don’t know if I like it, and I may not for some time.

Why to watch Birdman, or the Unexpected Virtue of Ignorance: It might well be genius.
Why not to watch: It might also be completely fucking insane.