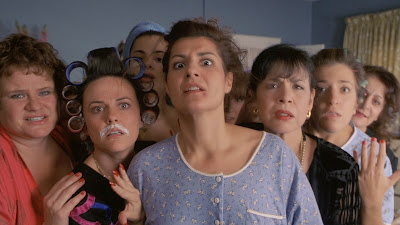 I probably shouldn’t enjoy My Big Fat Greek Wedding nearly as much as I do, but it’s an easy film to like. Romantic comedies are a genre that tends to leave me cold, except for those rare few that manage to truly be both romantic and funny. My Big Fat Greek Wedding is one of those rare films. There are plenty of things here that are genuinely funny and moments of genuine sweetness that come across as honest rather than manufactured. That’s a rarity, and it’s special when it happens.

My Big Fat Greek Wedding was a massive hit when it was released, and is currently the second-highest grossing independent film in Hollywood history (Paranormal Activity eventually beat it). There’s a reason for that, and I can only imagine that a lot of its business was repeat viewings from people who enjoyed it the first time. I’ve liked it every time I’ve seen it, too. It’s not only entertaining on a first viewing; it holds up well, too.

In a nutshell, Toula Portokalos (Nia Vardalos, who also wrote the nominated screenplay) is 30, unmarried, and working in the family restaurant in Greek Town in Chicago. There’s no real issue with the fact that she works at the restaurant or 30, but the fact that she is unmarried is a huge issue with her family, especially her father Gus (Michael Constantine). Toula would like more out of life, but feels like she’s stuck where she is. This is until one morning Ian Miller (John Corbett) walks into the family restaurant and Toula is immediately smitten.

This spurs Toula to a spate of self-improvement, which includes going to college to learn computers, cosmetics, doing her hair differently, and eventually working in her Aunt Voula’s (Andrea Martin) travel agency. Ian spots her here, and soon the two are dating, something that she keeps from her family because Ian is very much not Greek, and that’s a problem for Toula’s family, particularly Gus.

But hey, this is a romantic comedy, which means we’re going to get where we want to get. Eventually Ian proposes to Toula, Toula accepts, and when Ian is baptized into the Greek Orthodox church, even Gus begins to accept him into the family. There are plenty of culture shock moments for Ian learning how to deal with Toula’s massive family in which everyone is always in everyone else’s business. There are moments of possibly good-natured fun/possible death threats to Ian from Toula’s brother Nick (Louis Mandylor) and cousin Angelo (Joey Fatone), and some serious culture shock for Ian’s parents (Bruce Gray and Fiona Reid). But love, and a lot of help from Toula’s mother Maria (Lainie Kazan) win the day eventually and we get the ending we want. That is, after all, the whole point of romantic comedies, right? Hell, the fact that there’s a wedding is in the name.

I promise I’m not trying to be dismissive here even if it sounds like I am. This is a film that I genuinely like from start to finish for a lot of reasons, not the least of which is that there are plenty of places where I laugh pretty hard at it. My Big Fat Greek Wedding does a lot of things right. Vardalos’s script is smart enough to poke fun at the Greek traditions that she obviously grew up with, but does so in a way that makes this fun rather than nasty or mean-spirited. Her father’s quirks (he believes that every word in every language comes from Greek and believes that Windex can cure any ailment) are fun and funny, and while he’s curmudgeonly and seems selfish at times, it’s obvious that he loves his daughter. Lainie Kazan and Andrea Martin are great in this, gently guiding the men in their lives to the conclusions that they want to reach and doing it with enough subtlety that the men think the ideas were theirs.

But for as much as this film works because of the comedy, it also works because of the romance. Ian puts up with a lot to join Toula’s family, and while there are comic moments in this, this is also never mean-spirited. It comes off as real, and that’s a tremendous bonus. Both the humor and the romance never feel manufactured, and that alone is worth your time.

I also like the fact that while Toula definitely goes through a transformation early in the film, it isn’t the sort of drastic Ugly Duckling/Beautiful Swan transformation that is so common in the genre. All she really does is her hair differently, a little make-up, and change in her glasses for contact lenses. Frequently (see something like The Princess Diaries as an example) this transformation means an erasing of ethnicity. That doesn’t happen here. Nia Vardalos still looks Greek and still is Greek, even if she’s not nearly so frumpy as she is at the start.

This is fun stuff. If you haven’t seen it, you should.

Why to watch My Big Fat Greek Wedding: It’s genuinely funny and genuinely sweet.
Why not to watch: If you’ve been burned by rom-coms before, it’s easy not to trust.