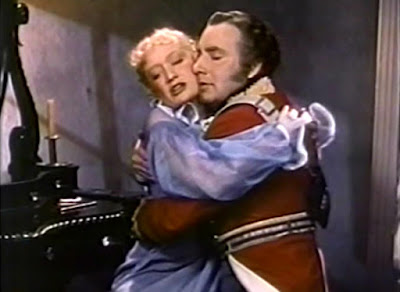 Somebody had to be first. Becky Sharp was the first feature film made with the three-strip Technicolor process. When we look at film firsts and film history, this is the one that gets remembered for pioneering this particular process. Why am I going on and on about this? Because that fact represents the only noteworthy thing about Becky Sharp, a film that runs a touch over 80 minutes and feels like double that length.

Where to start? We begin in the early 19th century with Becky (Miriam Hopkins, whose nomination is the reason I watched this) who is graduating from school. Her classmate Amelia Sedley (Frances Dee) is graduating as well, and a great deal is made over this. Amelia, you see, is from money and nobility. Becky, on the other hand, is poor and an orphan and was more or less a charity case for the school. This leads to a great deal of hurt feelings on Becky’s part, who is intensely jealous of the wealth and privilege of everyone around her and simultaneously bitter and sarcastic.

Amelia is whisked off home by her rather dippy brother Joseph (Nigel Bruce), and at his insistence, Becky comes along. Back at the Sedley house, Becky works on getting Joseph to propose to her, but because of the difference in social class, he more or less can’t without being disowned. At the same time, George Osborne (G.P. Huntley) proposes to Amelia. Becky, still writhing with jealousy, gets a job as a governess. It’s here that she meets Rawdon Crawley (Alan Mowbray). Romance ensues, and eventually the two are married.

Naturally, things are rocky, mostly because Rawdon is a gambler and Becky is a spendthrift. The two rack up massive debts and escape most of them when Napoleon escapes from Elba and starts making noises. Rawdon’s unit is transferred to Belgium where to two go and continue to live it up. Meanwhile, George has taken a fancy to Becky, who has become a social butterfly and who manages to keep the finances going as best she can by borrowing and not paying anything off.

And you know what? The rest of this straight up isn’t worth going into detail about. Eventually she almost has an affair to pay off Rawdon’s gambling debts, he disowns her, she has to literally sing for her supper, and then Joseph wanders back into her life. And then the damn thing blissfully ends, with a running time that feels like it’s timed with a sundial.

The biggest problem with Becky Sharp is the character of Becky herself. Initially, she comes off as almost modern. There’s something ironic in her manner. She’s snarky and rude in a way that seems to make fun of the social roles of the time. But the more the film goes on, the more it becomes evident that Becky is a social climber, a bit of a gold digger and incredibly rude to everyone around her. There’s nothing nice or likeable about her once you’ve spent more than 20 minutes in her company. She’s ungrateful to a fault. At one point, after her ex-brother-in-law has straight up bailed her out of a desperate situation, she throws a book at his head because she doesn’t like him. This is the person we’re supposed to root for?

This is, more or less, a very short version of the novel Vanity Fair by William Makepeace Thackeray, although it focuses pretty much exclusively on Becky. I’ve never read Vanity Fair, and based on this movie, I’m pretty sure that I won’t.

The fact that this is the first movie in the three-strip Technicolor format is interesting, but that doesn’t really help the way the film looks at all. It may well have been amazing in 1935, but the color frankly looks awful. In fact, the film looks as if it had been colorized by someone just learning how to do the colorizing process. People are weird colors and everything is both too bright and oddly washed out.

Add to this all of the actors who sound like they’re trying to sound as if they’d had a full dose of English snobbery injected and you end up with a film where everyone looks unnatural and sounds unnatural. It’s a damn shame coming from Rouben Mamoulian. Mamoulian made both Queen Christina (which I liked) and Love Me Tonight (which I really liked) and did the Fredric March version of Dr. Jekyll and Mr. Hyde (which was pretty good). I expected more from him than the waxworks we’re presented with here. Becky Sharp is a historical footnote in the world of film, and quite frankly that’s exactly where it should stay. There’s no good reason that I can see that anyone should seek this film out. If you really want to watch it, it’s evidently available on YouTube. Knock yourself out, but don’t say I didn’t warn you.

Why to watch Becky Sharp: Did I tell you it’s the first feature film made with the three-strip Technicolor process?
Why not to watch: Everything else.