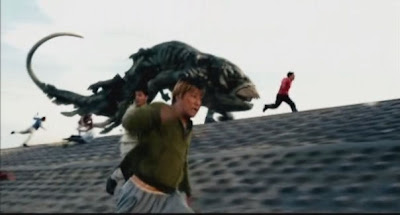 It’s a cliché to think that all giant monsters come from Japan. They don’t. Gojira does, Mothra does, Gamera the flying turtle does, but there are other places in Asia that have their own giant monsters. For instance, from South Korea we get the mutant beast in Gwoemul.

There are some significant differences between this critter and the traditional guys in rubber suits stomping on models of Tokyo. For one thing, while Gamera was the friend of children and Godzilla had a certain pathos, the mutant here is a completely destructive force. It’s an eating machine to be feared, run away from, and hidden from. No one feels sorry for this monster, wants it to survive, or thinks it’s anything but terrifying. Another difference is that this creature is entirely a production of CGI rather than a guy in a giant suit.

Gwoemul is Korea’s entry into the “scary monster created by the foibles of Humanity” film genre, and it’s a damn good one. The monster is creative and interesting, terrifying and brutal. The movie itself is not strictly a horror movie, though. Much of the film is comedic intentionally, and a lot of the comedy works really well. Additionally, it’s a family drama as we deal with the various battles and infighting of the Park family.

We start in an American military base where an American official tells his Korean counterpart to dump the old dirty bottles of formaldehyde down the drain. As the shot pulls back, we discover that it’s not just a few bottles of bad formaldehyde but dozens, hundreds, all being poured directly into the Han River. We jump ahead a few years and see a pair of fishermen capture something tiny and horribly mutated in the river, but it escapes. We move ahead to 2006 when a suicide jumper notices something big swimming under the water before he dives in.

From here we focus on the Park family. Gang-Du (Kang-ho Song) is the failure of the family, a man who sleeps too much and doesn’t do much of anything well. As his father Hie-bong (Byun Hee-bong) explains, as a child, Gang-Du didn’t get enough protein in his diet and it affected him badly. The one thing he has done well in his life is have a daughter, Hyun-seo (Ko A-sung). Gang-Du’s sister Nam-Joo (Bae Doon-na) is an Olympic-level archer with the problem of taking too long to shoot. There’s also another brother, Nam-il (Hae-il Park), who is an unemployed alcoholic college graduate with a lot of resentment for the rest of his family.

One day, while Nam-Joo is competing, the huge mutated creature comes out of the depths of the Han River and attacks the people on the shore. This includes the Park family. Gang-Du, fulfilling his role as tragicomic relief tries to pull his daughter out of the path of the creature, but grabs the wrong child. Hyun-seo is evidently eaten by the monster before it dives back into the river.

Those who encountered the creature, particularly Gang-Du are quarantined that evening, but as Gang-Du looks for something to eat, his phone rings. It turns out that Hyun-seo was spat out by the monster in a sewer it is using as a lair. The girl is still alive, and the family breaks out of quarantine to locate and rescue her.

There’s a lot to love in this movie. For a starter, the creature itself is a wonder. Huge and menacing, it is truly a terrifying creation, and its mutation is especially interesting. Dwarfed, useless legs hang from its back for instance. It looks like a gigantic multi-legged tadpole with huge fangs, a completely original creation, and one that is fascinating to watch. It also looks great in most of the shots, like a real thing instead of an obvious CGI creation.

There are other wonderful additions as well. The dinner scene of the four family members hunting for Hyun-seo, for instance is extremely touching. Settling down to a hurried meal, Hyun-seo suddenly appears in their midst. No one says a word to her and she doesn’t speak, but everyone feeds her, strokes her hair and tends to her, a sort of group delusion. It’s as if the family wants to help the girl and comfort her so much that the all hallucinate her presence in their midst, or that by pretending to feed her, they can truly comfort her in her sewer. That this immediately flashes to a scene of the girl collecting rainwater in her hand makes it especially touching.

As with all movies worth their salt, Gwoemul is concerned with far more than just a kick-ass monster and the potential survival of the little girl in the sewer. While there are some truly disturbing scenes (the monster disgorging a seemingly endless supply of human bones from its gullet is my favorite), there’s much more here than gore and shock value. Gwoemul feels like it could be an environmental film, and certainly the creation of the monster makes that an obvious conclusion. But there’s far more, and the environmental message is all but ignored or left only as a cause of the initial problem rather than the point of the film.

What is far more important is the action of the governments of South Korea and the U.S. The quarantine is created because of a virus scare coming from the creature. It quickly becomes evident that there is no virus, and the government is trying to prevent panic and keep a lid on the problem of the creature. The government acts in appalling ways throughout the film, less to keep the citizenry safe and more to protect itself from the backlash of an angry and frightened population.

Gwoemul is a masterful film, moving from emotion to emotion at whipcrack pace and running roughshod over typical horror movie conventions. It is scary, touching, funny, and smart, a great film not just of its own genre, but any genre.

Why to watch Gwoemul: Funny, scary, touching, sweet and sad. And a kick-ass monster.
Why not to watch: You don’t like America being the bad guys.
Posted by SJHoneywell at 3:32 PM