A Bite of the Big Apple

Woody Allen is one of the most consistent filmmakers going. He puts out about a film a year. Some years he does a little more, but consistently, he knocks out a film every year. According to IMDB, the last year he didn’t direct a film was 1981. Think about that—for just over 30 years, Allen has put out at least one film a year. He’s also consistently good. A handful of his filmography is genius, and most of the rest is at least watchable and entertaining. And with all of this he frequently appears in his own films and is consistent there, too. 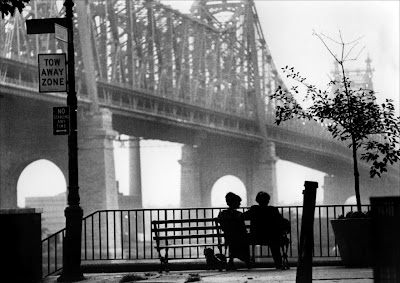 It wouldn’t be a hard guess after that to suggest that I am a Woody Allen fan. I’m not always in the mood for him, but I’m in the mood enough that I don’t generally say no to one of his films. Manhattan is his follow-up to Annie Hall, which is almost certainly his most iconic film. Manhattan bears some surface similarity, but also goes in a very different direction. Still, this is a treatise on the nature of relationships and why they frequently don’t work. In the case of Allen, as always, they don’t work because everyone is neurotic and spends too much (or not enough) time listening to his or her therapist.

Isaac Davis (Allen) is a twice-divorced television writer. In his early 40s, he currently has a 17-year-old girlfriend named Tracy (Mariel Hemingway). Isaac is the classic Woody Allen nebbish—neurotic, insecure, and simultaneously narcissistic and overconfidently intellectual. His second ex-wife Jill (Meryl Streep) is now a confirmed lesbian and is writing a book about their marriage and its break-up. Isaac’s friend Yale (Michael Murphy) is cheating on his wife Emily (Anne Byrne) with a writer named Mary Wilkie (Diane Keaton). When he meets Mary, Isaac is repelled by her, but also attracted to her in a real way.

The bulk of the film is about these relationships. While Isaac enjoys being with the young Tracy, he also assumes it can’t go anywhere because of her youth. Mary is convinced that her relationship with Yale will go nowhere, and anyway she’s still hung up on her ex-husband Jeremiah (Wallace Shawn), who she calls a complete ladies’ man and a sexual dynamo. For his part, Isaac gets fed up with his job and quits so that he can write a book and pursues Mary when he can, breaking things off with Tracy.

Really, that’s all that’s here. It’s a long game of people finding each other and walking away from each other, recombining in various patterns. Each of them is looking for love, for happiness, and for fulfillment, and most of them (there appears to be one exception) are far too self-contained and more importantly self-absorbed to benefit from anything they find.

The exception is Tracy, who in many ways to me is the central character here, even more than Isaac. It’s Tracy who utters the actual words of wisdom at the conclusion of the film, Tracy who is the one most open to something like a genuine and freely giving relationship, and Tracy who in many ways is the most emotionally centered and mature person in the film. This is particularly interesting coming from someone whose voice still feels like it hasn’t reached maturity. Everyone else in the film is capable of only a possessive love, a love that requires the other person be something to and for them rather than him- or herself.

Is it good? Yes, it is. Allen is too astute a filmmaker in general to make a lot of trash, and Manhattan comes right in the heart of one of the best periods of his career. It’s biggest failing might be that it is in many ways a sort of different version of Annie Hall, as it seems to explore many of the same basic ideas, coming at them from a slightly different direction.

Manhattan is well-served by its Gershwin soundtrack, which is used beautifully. It’s also well-served by being set in Manhattan, with a number of beautiful shots of the city serving as a backdrop for the small dramas we are able to witness. Allen chose to film in black-and-white, and I think it was the right choice here. There’s a beauty to the photography here that would be lost in color. Even more, there’s a level of black-and-white mentality in many of the characters, who would almost seem lost if they were depicted in color. Their world is two-toned, and the film itself reflects this.

It’s easy to get tired of Allen, particularly when it seems like every character he plays is a variation on a theme. He’s always neurotic, always sexually frustrated and motivated, always more intellectual than the average person, and both successful in what he does and completely dissatisfied with what he is doing. And yet it all works beautifully. Manhattan may not be the greatest of Allen’s films, but it is unquestionably one of his best and worthy on its own merits.

More than anything, the last five minutes is worth the journey. There’s a marvelous moment of epiphany here and a moment of great interior growth in Isaac if we choose to see it. While the ending is ambivalent, I choose to see it as a happy one, and I prefer to think that Isaac may stop shooting his life in the foot in spite of himself. At the very least, the ending gives me hope, and sometimes that’s all I ask for.

Why to watch Manhattan: Woody Allen near the top of his form
Why not to watch: Woody as nebbish can get very annoying.