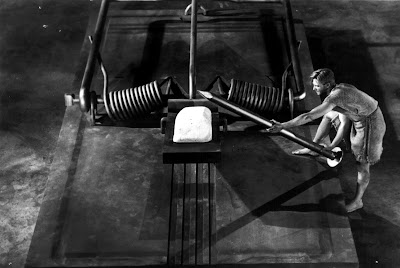 A “high concept” film is one that essentially asks “what if?” and goes from there. A surprising number of classic B-movies have this basic idea at heart. The Incredible Shrinking Man is certainly one such film. The premise couldn’t be simpler: What if something happened to a man and he started shrinking? What if there was no way to stop the shrinking?

Scott Carey (Grant Williams) is out on a boat with his wife, Louise (Randy Stuart). When she goes in to get him a beer, the boat sails through a strange mist, covering Scott in a fine spray of strange liquid. He shrugs it off, not putting it up to much, but six months later, he notices that his pants don’t quite fit and that his shirts are loose. He’s concerned, naturally, and after a few check-ups with his family physician, he realizes that he is indeed shrinking. Exposure to some sort of insecticide followed by his exposure to the radioactive mist has caused this bizarre, almost comic book-like transformation.

We don’t see a great deal of his transformation, of course. He starts at about 6’1” and shrinks down to about 5’10” in front of us. Then time passes and he’s forced to sell his story since he can no longer work. We discover why when we see him—he’s a dwarf version of his former self.

Doctors appear to arrest his shrinking when his height is about 3 ½ feet, and he appears to stop getting any smaller, but it doesn’t change his attitude any. He’s naturally frustrated, angry, and terrified, and now realizes that while the shrinking has been arrested, he will stay at this reduced height. He sticks at this height for a bit, and gets some relief when he meets a carnival performer named Clarice (April Kent). Clarice is of a similar height, and she seems to have adjusted herself to the large world around her quite well. Then, when he discovers he has started shrinking again, everything goes to hell. He’s reduced to living in a doll house and depending on Louise for everything.

When the pet cat mistakes him for prey, Scott winds up in the basement, unable to climb back up the stairs because they are simply too high and he has shrunk too much. A deadly fight with a spider, and Scott continues to shrink, and is still shrinking when the film closes up at the end.

The Incredible Shrinking Man is an interesting mixture of really good effects and very rudimentary ones. Frequently, Grant Williams got to work with giant versions of small items like a huge nail and a giant mousetrap. These moments are really good, because he actually looks his size. Other times, he is very obviously masked into a shot, and it looks completely fake, although it was certainly as good as it could be for the year of the film’s release.

Despite the frankly goofy “high concept” premise, this is a surprisingly effective and smart film. The smartest thing that’s done here is that the film gets us to the most interesting part—the very tiny version of Scott Carey—as quickly as possible. He’s an inch high and living in the dollhouse with still a lot of movie left to go, and he encounters the to-him giant spider for the first time with a good half hour left. This is the stuff we want to see here. Having him at half his normal size isn’t that interesting. Seeing him the same height as a spool of thread and forced to use a straight pin as a makeshift sword is the most interesting stuff, and we get a lot of it.

The fall into the basement is likewise genius. He is too small to get back up the stairs, and the basement becomes his whole world. His desperation becomes finding a source of water and food, which is difficult considering his location, and he is forced to survive on food placed in mousetraps and water dripping from above. Thus this becomes an odd little tale of existentialism as Scott continues to shrink and yet continues to fight for his life, knowing that sooner or later he will reach an atomic level in size.

Despite the cheap looking effects, I really enjoy this film quite a bit. I feel sorry for Scott knowing that as sorry as I may feel for him, there is nothing that can be done. It works in spite of its B-movie status because this foray into existentialism is not what one might expect from a film like it. For my money, I’d rather watch X: The Man with the X-Ray Eyes, but this will do for that glorious B-movie joy that can only come from the weirdest of the weird science fiction.

Why to watch The Incredible Shrinking Man: Like many a B-movie, it’s better than its silly premise.
Why not to watch: It’s ultimately pretty silly.