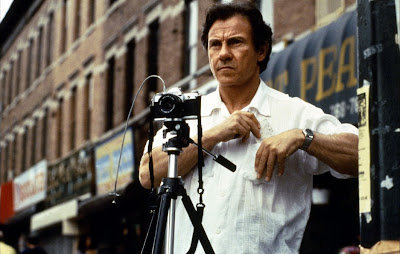 It’s easy for me to forget sometimes just how versatile an actor Harvey Keitel really is. When I think of him, I’m compelled to think of films like Pulp Fiction or Bad Lieutenant, and I forget that he’s a really capable actor in a lot of other, far less violent roles. He’s the central character in Wayne Wang’s and Paul Auster’s slice-of-life dramedy Smoke, which centers on a tobacconist on a street corner in New York. We interact with the lives of the owner and with a number of the customers as they attempt to survive and find meaning in what the world presents to them.

The New York smoke shop is home to Augustus “Auggie” Wren (Keitel), and the bulk of his clients are locals. One of these is Paul Benjamin (William Hurt), a formerly successful writer going through a permanent dry spell. We learn that a few years before, Paul’s wife was gunned down as a bystander during a bank heist, and he stopped writing. One day after buying his cigars, he almost walks into the street in front of a truck, but is pulled back by a young man who calls himself Rasheed (Harold Perrineau). Paul believes the young man to be homeless and offers him a place to stay, which Rasheed takes him up on a few days later.

But soon we discover that Rasheed is really Thomas Cole, and he’s disappeared from home. We also learn that his mother is dead and his father has been out of the picture for years. Thomas has heard that his father has turned up, and goes off to see him. He does, and discovers that Cyrus Cole (Forest Whitaker) runs a fading service station and lost his left arm in the car accident that killed Thomas’s mother. Around this same time, the eye patch-wearing Ruby McNutt (Stockard Channing) walks back into Auggie’s life and claims that he has a grown daughter who is pregnant and addicted to crack.

We also learn that Thomas/Rasheed is on the run not because of his father, but because he witnessed a crime. More than that, the robbers dropped the money they stole, and Thomas ran off with it, making him the main target of these criminals, and making his own neighborhood no longer safe.

Smoke is divided up into chapters that sort of are about the people they are named after, but also concern all of the characters either in or connected to Auggie’s place. One chapter of the film might claim to be about Ruby or Rasheed, but in each we spend time with multiple characters, learning a little more of their world and what makes them tick.

Some of these things that make them tick are quietly beautiful. For instance, we discover that Auggie has taken a picture from across the street of his store every morning at 8:00 for years, no matter the weather. He keeps these in scrapbooks in order by the day. Paul, flipping through them, discovers a picture that includes his late wife.

The main thing that we learn is that the people in this film are genuinely decent in the main. They have a past and a present and a future. They are also remarkably human and believable. These are people like those that everyone knows. They’re no different from anyone else, but each one has his or her own story, unique triumphs and personal tragedies that have shaped them in particular ways and have made them the people they are.

Once again, I’ve found another reason to be happy that I’m pursuing this list of films. This is not a film that would have interested me in the least without someone telling me that I need to watch it, and yet I find myself entirely enchanted by the whole thing.

I don’t have much to say in the negative here. It’s a great performance by Keitel, and William Hurt is as good as he generally is. I like Hurt in this role a lot. He’s able to express a sort of world-weariness and pain while still being intelligent and funny. If I need to toss out negatives, I’d suggest that one issue is Forest Whitaker’s fake arm. It’s freaking huge. Seriously, it hangs down to like his knee. I’m certain this is because he has a real arm inside the prosthetic, but still, it’s so disproportionate that it looks off-kilter. Additionally, the ending is a little too pat for Rasheed/Thomas, and while believable, I’m not sure it works entirely.

What I like most here is that Smoke simply ends. It doesn’t come to a concluding plot point; instead, it just reaches a point where there’s nothing in particular left to say. Like life, it’s messy and unfinished, and filled with loose ends. I like this because it feels real. There is a sort of sequel called Blue in the Face that I don’t think I really want to watch. I’m satisfied with the stories I have here, and at least for now, I’d like to keep it that way.