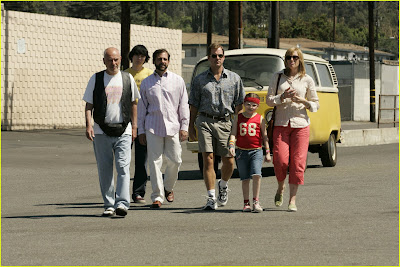 Comedy is a subjective thing. I realized this yet again recently when I recommended the film My Favorite Year, a personal favorite of mine, to my podcasting partner, Nick Jobe. Nick was lukewarm on the film, liking Peter O’Toole’s performance and not much else. Me? I think that film is riotously funny. But comedy is subjective and what I find funny, others don’t and vice versa. Little Miss Sunshine is a film that only those with a hint of a black soul will really enjoy for the comedy it contains. It’s an homage to the idea that all comedy comes from the pain of others, or pain in general. This film is a wrist-slitter of a comedy, at the same time bleak and riotous, depressing and screamingly ridiculous.

We spend a few days on a road trip with the Hoover family. Mom Sheryl (Toni Collette) is overworked and overstressed, in no small part because husband Richard (Greg Kinnear) is currently jobless. He’s not out of work—he’s just jobless. He’s attempting to pitch his self-fulfillment program called “The Nine Steps,” but is unable to get anywhere with it. Older child Dwayne (Paul Dano) is a devotee of Nietzsche and has taken a vow of silence until he fulfills his dream of becoming a test pilot for the military. Richard’s father Edwin (Alan Arkin) is living with the family because his constant desire for sex and new hobby of heroin snorting got him kicked out of his retirement home. And then there’s Olive (Abigail Breslin), who is obsessed with child pageants.

Into this mess comes Frank (Steve Carell), Sheryl’s gay brother. The country’s most pre-eminent scholar of Marcel Proust, Frank is recovering from a suicide attempt when his grad student lover ran off with another man. And then into this mess of a family comes news—Olive came in second for the regional Little Miss Sunshine pageant and the winner was forced to withdraw, which means that Olive is now the regional champ.

Low on money and constantly at odds with each other, the family agrees to come together so that Olive can live out her dream of being in the pageant, so they start an 800-mile drive from Albuquerque to Redondo Beach. What happens along the way is an acidic, black-blacker-blackest comedy version of National Lampoon’s Vacation. Along the way, almost everyone in the family encounters something that crushes them emotionally and spiritually. Each of these moments is individually tragic and terrible, but is also comic in its own way.

As the trip continues, everything falls apart and we realize a number of things. This is a family with big dreams and not enough talent to back it up. The one truly talented member, Frank, has given up on himself, and has thus fallen back to the mediocrity of the rest of his family. They are a vastly dysfunctional group of people, and much of the point of this film is not the realization of their dysfunction, but their ability to come together in spite of it.

It all comes to the point of the Little Miss Sunshine competition itself and Olive’s performance in the talent portion of the pageant. If you haven’t seen this film, I’m not going to spoil this moment for you, because it is a true moment. If you have, you know exactly where I’m going with this. This moment is one of the most sublimely ridiculous things I have ever seen in a film in 40+ years, and it is sheer genius.

The reason it’s genius is because it’s so desperately needed at this point in the film. We’ve seen this family go through so much over and over with their lives becoming more and more tragic, that this couple of minutes of complete insanity and a last wonderful moment of the family coming together. In addition to being so funny, it’s also wonderfully uplifting in its own way.

One aspect of Little Miss Sunshine that I love is what happens with the Hoover family VW Microbus. Just as the family begins to splinter, the bus begins to fall apart, breaking down consistently through the film until it is nothing more than a shell with wheels and a motor. Everything that can fall apart does fall apart, and there’s no money to fix it and no ability to rent anything else, and so, like the family itself, it plugs along, damaged but still functional.

The performances are uniformly good and better here. Greg Kinnear plays his role with just enough smarm to be believable as a guy who is completely sold on his self-help techniques and with just enough humanity by the end to make him human. The standouts for me, though, are Paul Dano, Toni Collette, and most especially Steve Carell. I can’t confess to being a huge Paul Dano fan in general. I don’t dislike him; I just don’t really consider him, but I like what he does here. Dwayne is filled with anger and contempt, and he oozes this without uttering a word for the bulk of the film. Toni Collette, who I tend to like, is almost invisible in a lot of the film, which speaks to just how good she really is here. She, like brother Frank, is not quite the loser that the rest of the family is—she’s the one who keeps them together and the one who gets no credit for doing it, which makes her semi invisibility believable and perfect.

It’s Steve Carell, though, who is something of a revelation. Carell has the ability to be really funny when he wants to be, but he can also be unpleasant and embarrassing. Here, he’s nuanced, tragic and comic at the same time. He’s a man beyond the end of his rope and seeing the world both as a tragedy that has befallen him and as a comedy happening to someone else. And he makes this work, laughing at what happens because he can’t allow himself to cry. There is a tragicomic feel to his refrain of “Have I mentioned that I’m the pre-eminent Proust scholar in the US?

I should mention both Alan Arkin and Abigail Breslin, too. Both were nominated for Oscars, Best Supporting Actor and Actress respectively. Both were nominated, I think, as sentimental choices. For all its black humor, Little Miss Sunshine is oddly uplifting. Arkin won and probably didn’t deserve to. Breslin didn’t and didn’t deserve too, either. But you can’t explain the Oscars—sometimes the nominees are there for reasons other than what we might want.

Why to watch Little Miss Sunshine: Acidic comedy to slit your wrists to.
Why not to watch: This road trip makes the Griswold’s vacation look tame.

Posted by SJHoneywell at 9:53 PM