Unsafe at Any Speed 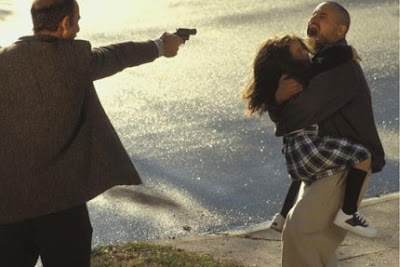 Going in to Crash, I knew only that it was controversial. The film itself is somewhat controversial, at least. What’s really controversial is that it beat Brokeback Mountain for Best Picture at the Oscars. Whenever something like that happens, there’s fallout, and so within a matter of moments Crash became filma non grata. Had Brokeback walked off with the coveted prize, this film would be remembered as a solid, well-made film about everyday, casual racism. Instead, it’s put in the same category as films like Around the World in 80 Days. It’s a poser, a film that’s not as good as the Academy thinks. Or, more damning, it’s an Oscar winner because it was the safe choice. It’s about a topic Hollywood loves, and it doesn’t involve any of that…y’know…gay stuff. The truth might actually be simpler—nothing with Tony Danza in it deserves to be Best Picture.

Crash is one of those films with a couple of dozen stories going on at the same time. It’s the sort of film that makes me wonder why I started doing summaries of what I watch in the course of these reviews. So, I’m not going to, because it would take me the length of this review plus another half just to get through all of the characters, all of the stories, and all of the ways these different stories meet up. Yes, it’s one of those movies, where each of the many stories takes a different twist and intersects (or, perhaps, “crashes into”) another one. Each character meets up with a few of the others at times, and we get everyone’s story, at least in part.

It’s also the sort of film that has a massive cast of A-, B-, and C-list celebrities (read: Don Cheadle all the way down to the aforementioned Tony Danza). Everyone here is, more or less, a supporting actor because no one is really central to the plot. Each story is important, but each story is such a small piece of the whole, that it’s impossible to peg one of them as being what the film is really “about.”

So what it is about is what all of the stories have in common: racism. In each of these stories, racism takes a part, either centrally or tangentially. In other words, in a given story, sometimes racism is the main course and other times, it’s a small side dish. The film is smart enough to not play any sorts of favorites with the racism, either. White-on-black racism? Check. Asian-on-Latino racism? Check again. Persian-on-Latino racism? Yep. It’s all here, just a big bundle of racism. It’s almost as if being a citizen of the United States gives you the right to vote, bear arms, and a complimentary guide to racial slurs.

Here’s the thing, though; Crash is a good film. It’s better than all of the bad press it got for beating a better film that deserved to win more. It’s well acted, solidly directed, and interesting from start to finish. No, it’s not nearly as moving or as good as Brokeback Mountain, but it’s not worth nearly all of the derision it’s gotten since the Oscars.

One reason it works so well is that it implicates all of us. We’re all guilty of this sort of casual racism whether we want to believe we are or not. We all, more or less, buy into some of the stereotypes that exist in the world, often justifying them to ourselves by thinking that stereotypes exist because there’s a hint of truth to them. We secretly even welcome the stereotypes because they make life easier by allowing us to compartmentalize people and give us something to expect. Everyone does it, or at least everyone I know does it. Crash plays with those stereotypes and does so without shame, throwing them back in our faces throughout. And it works because when we think about it, we know people like these characters. I know a African-American man who really buys into all of the anti-black conspiracy theories, so seeing Ludacris portraying that stereotype felt right at home.

Bottom line? Crash wasn’t the best film of its year. But it’s still a very good film and one worth watching. If it’s been some time since you’ve seen it, you should give it another chance. Forgive it for winning something when it’s only real crimes were being a safer subject matter and being nominated in the first place. See it for the stellar cast, many of the actors getting only a few minutes of screen time, but most putting in memorable performances. See it because it’s better than your anger lets you remember. On its own terms, Crash deserves better.

Why to watch Crash: Because racism isn’t dead.
Why not to watch: Because all of that complaining re: Brokeback Mountain? Yeah, it was pretty much right.