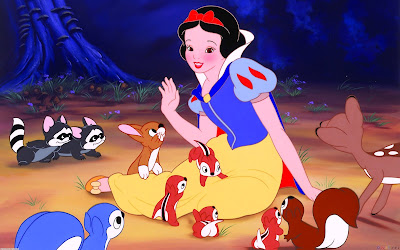 If I were as cynical as I like to imagine myself, I would hate Snow White and the Seven Dwarfs. There are many things that really should piss me off. First and foremost is Snow White’s voice, which approaches dog whistle range. That’s at least the first thing I notice. The sexual politics are even more disturbing, and I’ll get to that later.

If you don’t know anything about Snow White and the Seven Dwarfs, you’re not allowed to read this blog any more. I’m not saying you need to have seen the movie (although you really should have), but you should at least be vaguely familiar with the story through some medium at this point in your life no matter how old you are. If you’re capable of finding this blog, you should know this story so that I don’t have to go into it.

It’s pretty commonly known that this film is the first-ever full-length animated film, and for that, it’s noteworthy. It was a huge risk, and I imagine that many people were doubtful that it could be pulled off, and yet Snow White is still around and rightfully considered a classic film. More importantly, it holds up beautifully, and still holds a real charm today, more than 70 years later.

The thing is, I can only assume that I like this film because of its history and because there is a great deal of nostalgia connected to it, because there are some real problems here. Snow White’s voice really is difficult for me, because she sounds like a pre-pubescent girl. It’s so high and so tweaked and so affected that it frequently hits me like nails on a chalkboard (and yes, I realize that there are fewer and fewer people in the world who get that reference). It is almost as if her voice were specifically designed to be precious or overly delicate. But I can live with that.

What I have trouble living with is, as mentioned above, the sexual politics of the film, although some of that comes from the story itself. The evil queen, of course, is only concerned with being the most beautiful woman in all the land, and certainly there are plenty of people like this in the world. And I can deal with that. But for Snow White’s part, all she wants is a prince to come and take her away and carry her off to his castle to live happily ever after. She is utterly passive in her own world, a handy prop for a handsome prince.

Yes, this was made in 1937 and certainly that figures into it, but this film has very much guided and directed the Disney princess idea from 1937 to the present day. The main goal of any Disney princess is to find the prince and marry him. That’s her entire existence. Find the guy, get him to fall for her, get married, and (to mix films) bibbity-bobbity-boo, happily ever after ensues.

It bugs me. It bugs me that this is what is presented as a legitimate life goal for young girls, and that Snow White is somehow a woman that little girls aspire to be. Her only values throughout the film is her physical beauty and her ability clean and cook for the dwarfs (and yes, it bothers me not to be writing “dwarves,” but when in The Magic Kingdom…). We know very little about her as a person and nothing about the basically worthless prince who shows up once and sings a song and then shows up at the end for the curse-breaking buss on the lips before riding off castle-ward with Snow White all but being dragged by her hair. Even the songs she sings are based around these two ideas—cleaning is fun, I’m wishing for a guy to come and fall in love with me, and someday a guy will show up and love me, or “Whistle While You Work,” “I’m Wishing,” and “Someday My Prince Will Come” respectively.

What I do appreciate here is that there’s no shortage of scare. The queen is truly maleficent, commanding her huntsman to cut out the girl’s heart. The transformation scene into the old hag is similarly excellent and almost certainly scared a generation of tender tots whose parents didn’t expect that level of darkness in a children’s film.

At the end, I can’t hate this film or even truly dislike it. For what it is, it’s a piece of beautiful animation, and it set a standard and a trend that continues to today. What I can object to, and do object to, is the pattern it set up in virtually every other film of this stripe from Disney. Even when Disney spoofs it in a film like Enchanted, that core reality of the princess being submissive and waiting only for her prince to rescue her remains strong. I could wish for another plot element, and a more interesting and active prince character, and some actual character for Snow White herself beyond a squeaky voice and insisting on the dwarfs washing themselves before dinner. But I suppose I can’t have it all.