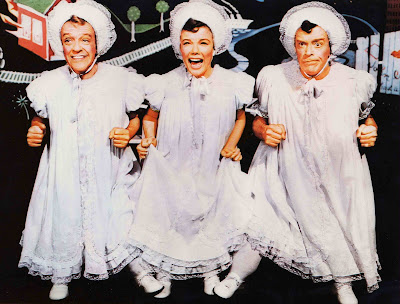 The Band Wagon from 1953 is one of those musicals that strikes at the whole meta-quality of a lot of musical theater. We sit and watch a film called The Band Wagon in which a cast of characters puts on a stage show called “The Band Wagon.” It’s also the sort of musical in which virtually every uttered syllable is done as broadly as possible to make sure that we in the audience get that it’s funny. An early scene in which the two playwrights talk about their idea is filled with shouting and whooping and a shit-ton of congratulations but pitifully little about their actual idea. Rough ride, right?

Well, yes and no. See this is also a musical comedy that features the talents of Fred Astaire and Cyd Charisse. It’s physically impossible for me to completely dislike something with Fred Astaire in it because I like Fred Astaire. I feel the same way about Gene Kelly, just for the record. Astaire is a likeable actor, and even with a thin plot and considerable overacting from most of the cast, he’s a pure pleasure to watch dance. I mean, really, if you can’t sit back and smile when Fred Astaire is swinging Cyd Charisse around, you may not have much of a soul.

Tony Hunter (Astaire) is a fading star of musical film headed to New York. His friends Lily (Nanette Fabray) and Lester Marton (Oscar Levant), have written a new musical comedy and have lined up the perfect guy to direct it: Jeffrey Cordova (Jack Buchanan). Cordova is the biggest thing in New York theater, running two hit shows and starring in a third. According to Lily and Lester, he can do anything.

What Jeff wants to do, though, is take their lighthearted comedy about a writer who sells out and turn it into a modern retelling of Faust with demons and soul selling and heavy, heavy drama. He wants to reinvent Tony Hunter, and figures that this will do the trick. He throws in the added cache of bringing in the top choreographer Paul Byrd (James Mitchell). Byrd brings with him Gabrielle Gerard (Cyd Charisse), the premier ballet dancer in New York.

As these things happen in musicals, we learn that Tony is overwhelmed by the production and intimidated by Gaby. She, for her part, is a long-time fan of Tony Hunter and is intimidated by him. When they meet, the accidentally insult each other and decide that they can’t work with each other, but are forced to. There’s the added tension that Gaby is romantically attached to Paul Byrd in addition to being his protégé.

Ah, everything goes pretty much as you’d expect. The show is a massive overblown flop, and rather than fold the show, the gang gets together and goes back to the original script and the original songs written by Lily and Lester. They even bring Jeff back into the fold, as he proves to be a far better person than his ego would suggest at first. Further, this is the break Gaby needs with Paul Byrd; she stays with the show and he leaves it, and the implication is there that this spells the end of their relationship as well, which opens the door for the happy dancing ending with Gaby and Tony pirouetting off into the sunset.

I’d be hard pressed to say I like this as a film. It’s dippy and broadly acted in a way that bothers me because it strays so far from reality. But again, I can’t dislike it completely because of just how damn good the dancing is, and it’s really good. Vincente Minnelli isn’t my favorite director by any stretch, but I can’t deny that he had a real talent for putting together one hell of a great musical number. Most of the musical numbers are wild and raucous and beautifully staged and filmed. They are a true pleasure to watch.

But here’s the other thing—when they take the show on the road, we naturally get a lot of the numbers that they’re putting back into the film. The film is smart enough to not show us all of the Faust stuff, but we do get all of the new stuff. While these numbers are good (including the show-stopping “Triplets”), they don’t at all seem to have anything to do with the show they’re putting on. I mean, it’s a show about a writer going through a crisis of conscience, so why is there a hoedown? Why is the Triplets number there at all? I know I’m overthinking this, but dammit, it just doesn’t fit.

So, it feels disjointed. There’s no way around the fact that this show (which is naturally a smash hit) doesn’t make a damn bit of sense. And that’s ultimately where I am with this as a film. I can’t admit to liking it or even being able to parse what they’re trying to do in anything like a real-world situation, but I’ll be damned if I didn’t enjoy watching it. Even the numbers that I didn’t like much, like Fred Astaire singing about his shoe shine, are undeniably worth seeing. And the number with Cyd Charisse in the gangster club is probably top-10 all-time great musical scenes.

So, while it’s not a great movie, it’s undeniably a spectacle worth watching, and you’ll walk away with a smile.

Why to watch The Band Wagon: Because Fred Astaire and Cyd Charisse spend a good portion of this film dancing, dammit.
Why not to watch: It’s not nearly as good when the cast isn’t on stage.