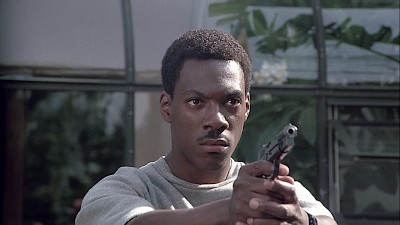 If you’re younger than 35, I’m going to make a statement that you won’t believe: there was a time when Eddie Murphy could do no wrong. Even with the misstep of The Golden Child, Murphy’s string of great movies ran for a good six or seven years. Right smack in the middle of that run came Beverly Hills Cop, which may well be his best.

Detroit detective Axel Foley (Murphy) is the stereotypical loose cannon cop, operating outside police procedure to get the job done. As the film starts, Axel has hijacked a truck full of stolen cigarettes in an attempt to make a bust on smugglers. It goes haywire and he gets chewed out by his equally stereotypical angry boss (Gilbert R. Hill). Shortly thereafter, he meets up with his old best friend Mikey Tandino (James Russo). Mikey has been working out in Beverly Hills, and has shown up with a fistful of German bearer bonds. Shortly after he shows up, Mikey ends up dead.

Since the trail leads back to Beverly Hills, Axel takes his vacation time and heads west to California to look into things on his own despite being told to not do exactly that. He meets up with an old friend named Jenny Summers (Lisa Eilbacher), who works at an art gallery. As it happens, Mikey worked for the same company as a security guard. The owner is a man named Victor Maitland (Steven Berkoff), and it doesn’t take us long to figure out that Victor is as dirty as they come. It helps that the guy (Jonathan Banks) we saw kill Mikey is sitting in Victor’s office when Axel shows up.

What ensues is an action comedy adventure concerning Axel Foley’s attempt to find justice for his friend Mikey. Along the way, he runs into the twin problem of Beverly Hills officers Taggart (John Ashton) and Rosewood (Judge Reinhold), who are both a hindrance to his investigation and eventually his allies.

I’m not really sure that Beverly Hills Cop can truly be explained; it needs to be experienced. It doesn’t really sound like a set up for a comedy, but it’s screamingly funny throughout. Eddie Murphy also doesn’t really seem like he’d work well as an action hero, and yet here he is, kicking ass and taking names.

A great deal of the comedy comes from the stunts Axel pulls off. At one point, knowing that Taggart and Rosewood are waiting outside his hotel, he sends them out room service and disables their car with a couple of bananas in their tailpipe (bananas he took from the buffet at his hotel, a buffet guarded by a very young Damon Wayans). It’s a scene of true comic genius and timing, almost impossible to explain in a way that makes it sound anywhere close to as funny as it really is.

Another comedic score here is the presence of Bronson Pinchot as Serge, the oddly accented assistant at the art gallery who seems to be obsessed with offering visitors to the gallery espresso made with a little lemon “tweest.” In fact, there’s a good deal of truth to the notion that this film very much launched Pinchot’s career. His two short scenes were some of the most talked-about moments from this film when it was current, and it’s no coincidence that shortly thereafter he was the major selling point for the show “Perfect Strangers” using essentially the same accent as he did here.

The real genius of this film is that it really works on two levels. On the one hand, this film is funny all the way through, start to finish. Murphy is as funny as he ever was at the beginning of his career on Saturday Night Live. Axel Foley is one of the great 1980s comedy characters. He’s also one of the great 1980s action heroes, as difficult as that might be to believe. Beverly Hills Cop features moments that are really funny (Taggart trying to climb a wall while invading Victor Maitland’s house) followed immediately by great action sequences (the firefight at the mansion).

Another huge plus here is the iconic soundtrack, never quite successfully duplicated but frequently referenced in dozens of films in the years that followed.

If there’s a downside, it’s that Beverly Hills Cop absolutely screams that it was made in the heart of the 1980s. Axel, checking in to an expensive Beverly Hills Hotel, is taken aback by the room charge of $235 per night, and at the end spends a then-staggering but now quite reasonable $95 on hotel bathrobes. The soundtrack, as good as it is, is also right out of the mid-1980s.

My only real fear in recommending this film is that if you didn’t grow up with it, it might not work for you. I don’t know how good Beverly Hills Cop is if you didn’t see it when it was shiny and new. If you did, it’s still damn good. It might just be the nostalgia talking, but I had a great time reliving this one.

Why to watch Beverly Hills Cop: Eddie Murphy at one of the high points of his early film career.
Why not to watch: It’s pretty dated. If you don’t remember it from your youth, it might not work for you.